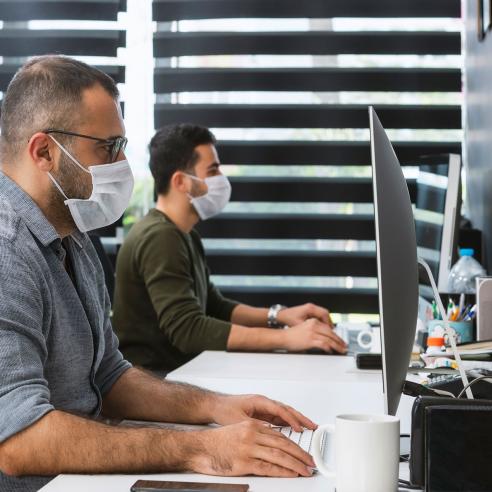 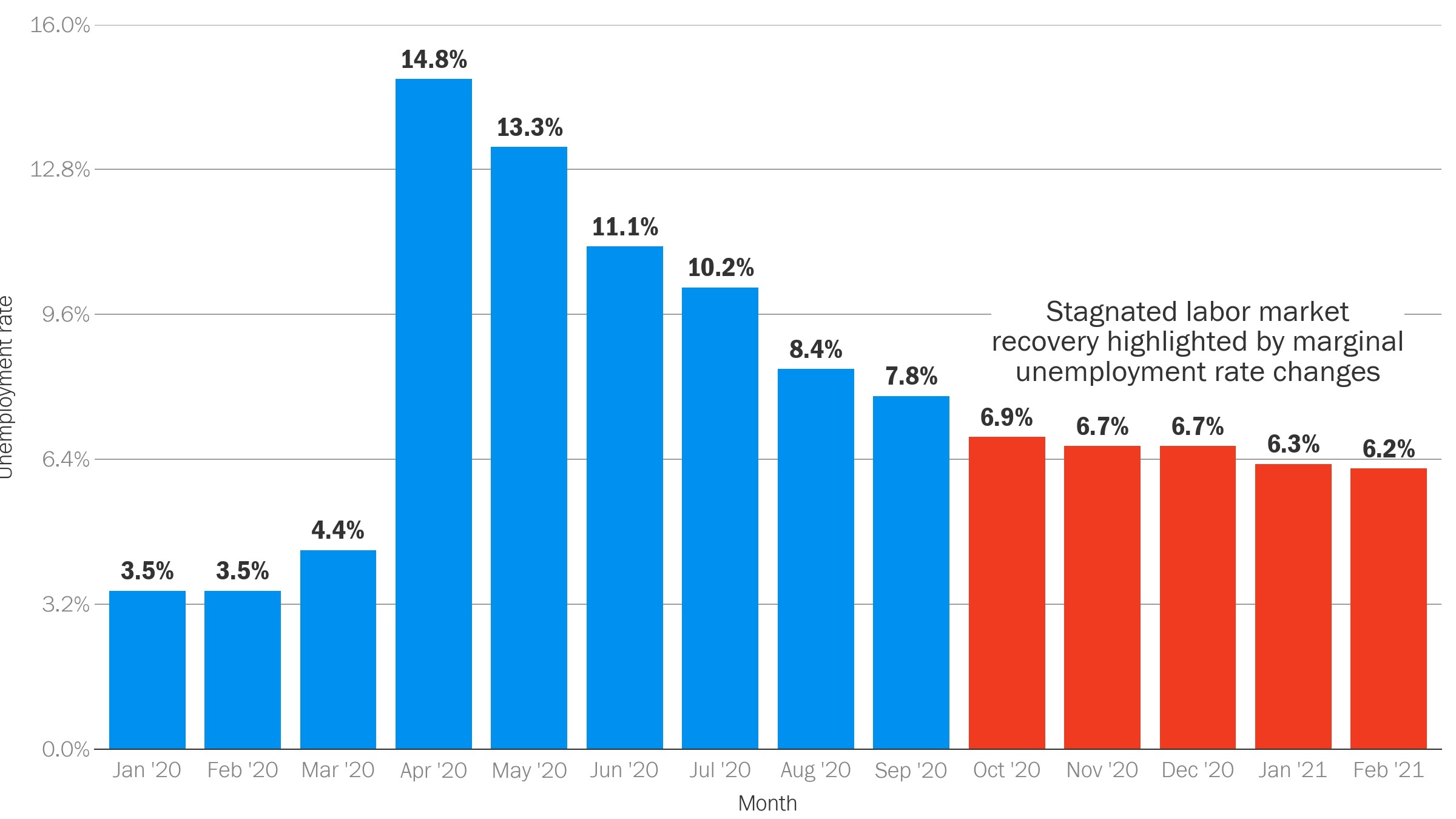 The February Employment Situation report from the Bureau of Labor Statistics (BLS), released on March 5, revealed little to no change in labor market indicators. Overall, nonfarm payrolls reportedly increased by 379,000 jobs, but the unemployment rate only decreased by 0.1 percentage point and the number of jobs in the economy is still 9.5 million (6.2 percent) lower than pre-pandemic levels.

Despite the small increase in the number of jobs, the number of persons unemployed remains at nearly 10 million, with little change from the preceding month. Further, this indicator is still about double the level it was 12 months ago in February 2020.

The number of persons who are not in the labor force but want a job also had little change (-227,000), totaling about 6.9 million persons. Individuals in this category do not count towards the unemployment rate statistics since they were not actively looking for work in the past month. Under normal circumstances, however, they would likely be a member of the labor force.

Finally, the number of persons employed part time for economic reasons, but who would prefer full time employment, experienced a slight decrease (-88,000) in February. Now totaling over 6.1 million persons, these underemployed individuals have had their hours reduced or were unable to find full-time jobs due to the labor market conditions. 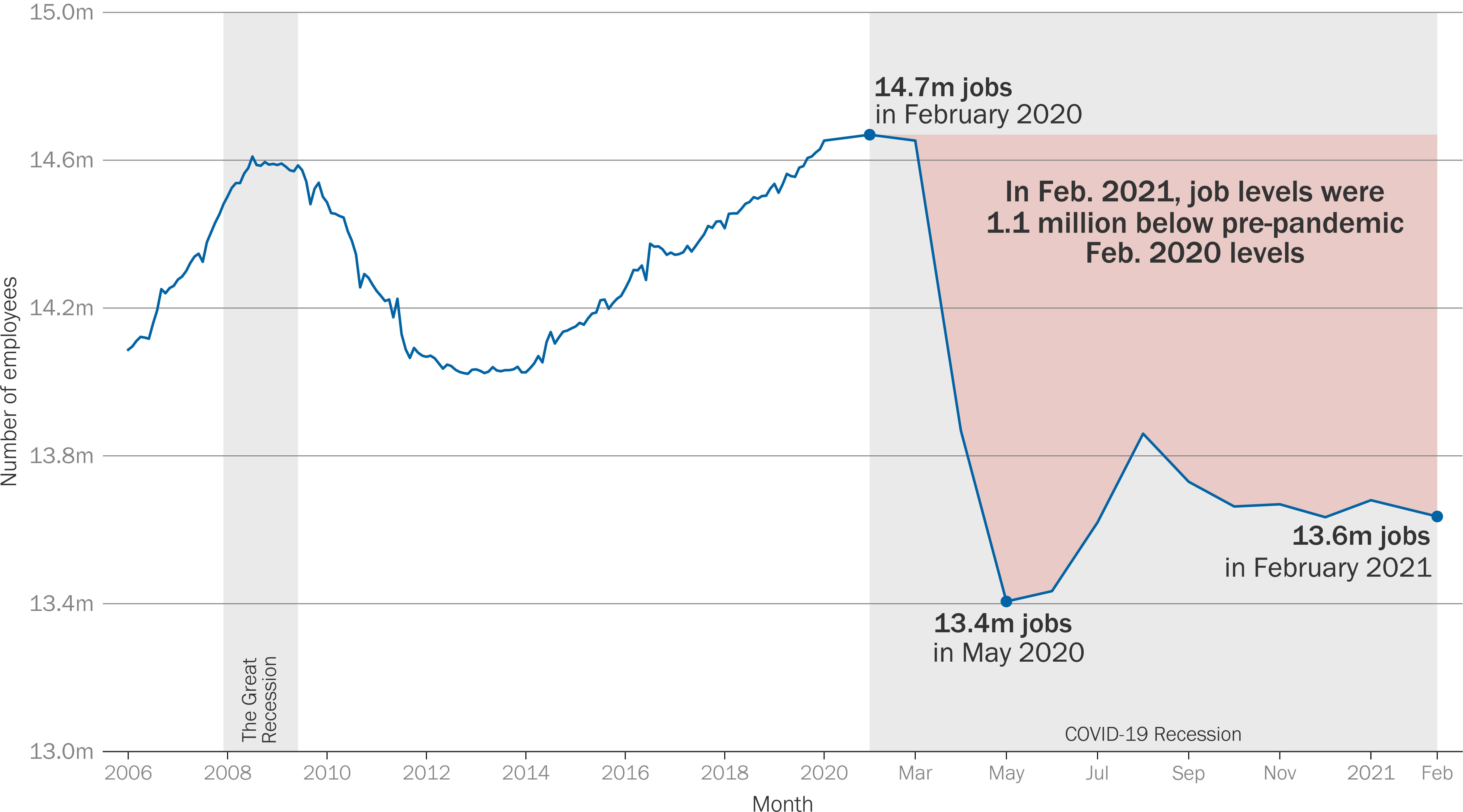 Most of the job gains in February were concentrated in the leisure and hospitality sector. Other, smaller job gains occurred in temporary help services, health care and social assistance, retail trade and manufacturing. Industries such as construction and mining cut jobs over the month. 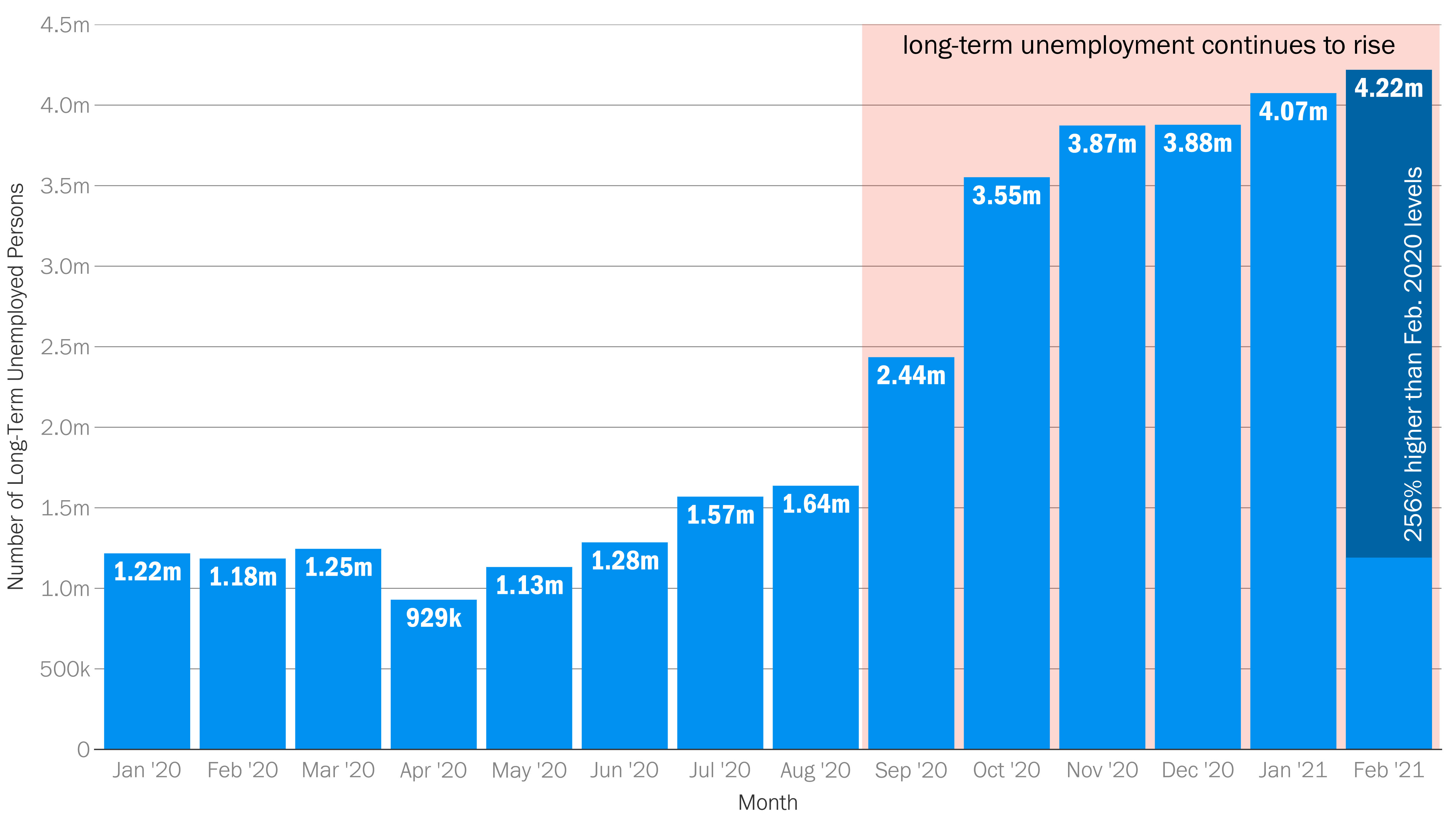 Long-term unemployment, a particularly important indicator of economic health and for measuring the strain of the pandemic on local government resources, experienced a slight increase in February (145,000). This indicator, now at a more than seven-year high, accounts for over 40 percent of all unemployed individuals. As long-term unemployment continues to increase, the strain on county resources furthers.

As with last month, long-term unemployment is over 3 million persons higher than it was 12 months previous, or nearly 2.5 times higher. Continued high levels of long-term unemployment could impact the broader economy by hindering labor force recovery, and further increases will only increase the strain on local governments.

The need for additional aid is overwhelming. Moody’s Analytics predicts the passage of the $1.9 trillion American Recovery Act package could boost the recovery, allowing the economy to return to full employment by early 2022. If the package is passed, Moody’s also predicts GDP could grow by over 6 percent by the end of the year.

Pandemic-related costs have increased significantly for almost all local governments, outpacing revenues across the nation. National reports on local government revenue are limited and capture only a slice of county government revenues (for example, only 38 percent of county revenues are generated from taxes) and only available through Sept. 30, 2020. A COVID-19 coalition survey captured more recent data illustrating the local financial situation. In the Dec. 2020 survey, most counties reported negative financial impacts of COVID-19.

Local governments are uniquely positioned to drive economic recovery, organize vaccine distribution and execute the local public health response. Every dollar of local government aid is at least a dollar increase in GDP growth. Without this additional aid, our nation’s economy will suffer. Following the Great Recession, it took 133 months (11 years and 2 months) for local government employment to return to pre-recession levels, inhibiting the capacity of counties – one of the nation’s largest employers – to serve local communities. Local government spending, bolstered by federal aid, will drive COVID-19 economic recovery, restore one of the nation’s largest workforces and prepare communities for future growth through vital infrastructure, health, safety and resiliency investments.

Read the full February Employment Situation from the Bureau of Labor Statistics here.