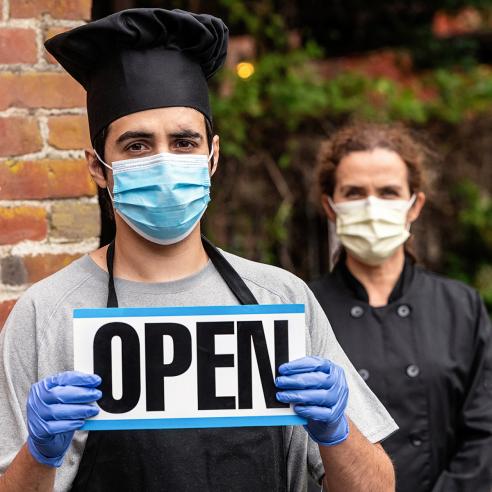 The April Employment Situation report from the Bureau of Labor Statistics (BLS), released May 7, signaled potential labor market stagnation or retraction across several indicators, with others showing improvements. Compared to the strong growth experienced in March 2021, April non-farm payrolls increased by a marginal 266,000 jobs. The April job gains also lie in stark contrast to estimates of increases between 700,000 to 2 million, released earlier in the month.

Although the number of persons employed increased, the April 2021 unemployment rate experienced a slight backslide, increasing 0.1 percentage points to 6.1 percent. The increase in the unemployment rate is the first retraction in recovery this indicator has experienced in the past 12 months, signaling a potential stagnation.

Despite the contradictory positive outcome of increased nonfarm payrolls and the negative outcome of a higher unemployment rate, the number of unemployed persons remained essentially unchanged in April – now 4.1 million persons higher than pre-pandemic levels. Though these indicators seem at odds, further analysis reveals other factors at play, such as the labor force participation rate. A comprehensive look at the labor force data shows that the increase in the unemployment rate is not a cause for concern. Most indicators point toward measured optimism that the labor market may continue to grow in the coming months.

Other key indicators point toward recovery ahead

Alongside labor force participation, other indicators point toward recovery on the horizon. Workers who were employed part-time for economic reasons decreased by 583,000. These workers would prefer a full-time job but work part-time until they can find full-time work. Thus, this decrease demonstrates increased economic activity since many of these part-time workers could transition to full-time positions. Another telling indicator is the number of employees unable to work because their employer closed or lost business due to the pandemic. The indicator decreased from 11.4 million in March to 9.4 million in April.

Furthermore, the number of people prevented from looking for work due to the pandemic decreased by almost 1 million (from 3.7 million in March to 2.8 million in April). These changes are signs that the pandemic is beginning to lose its grip on the economy. Even teleworking saw a decline of almost three percentage points (from 21 percent in March to 18.3 percent in April) as more employees return to in-person workspaces. As vaccination rates increase and governments loosen restrictions, these recovery trends will continue to bring jobs and workers back into the economy.

Most major sectors remained unchanged at the industry level, neither losing nor gaining a substantial number of jobs in April. Most notably, Leisure and Hospitality saw the most significant gains (+331,000) as pandemic-related restrictions relaxed. However, the sector remains 2.8 million jobs below its February 2020 level. Financial Activities and Social Assistance also saw slight increases of 19,000 and 23,000, respectively. On the other hand, Professional and Business Services lost the jobs in April, driven by a 111,000 decline in Temporary Help Services. Transportation and Warehousing jobs also decreased as Couriers and Messengers lost 77,000 jobs, as did Manufacturing (-18,000) and Retail Trade (-15,000). Despite various gains throughout the pandemic, nearly every sector remains well below pre-pandemic levels.

The economic outlook remains largely positive, but expectations are measured

Although April’s labor market indicators sent mixed signals about the current state of the labor market, the economic outlook can be characterized as measured optimism. Last week, the Bureau of Economic Analysis (BEA) published advanced estimates of key quarter one business cycle economic indicators. As Moody’s Analytics notes, among the highlights, is growth in real economic output (gross domestic product – GDP). The measure increased at a 6.4 percent annualized rate – nearly closing the gap between losses due to the pandemic in the prior quarters. Moreover, real consumer spending increased by 10.7 percent (annualized rate), stimulating economic activity and driving recovery efforts. Real business fixed investment also grew by 10.1 percent (annualized rate) and real residential investment increased by 10.8 percent (annualized rate). All this to say, April labor market indicators may have fallen short of estimates and goals. Still, as the nation further increases the vaccination rate and moves into the summer months, which typically have higher economic activity, the outlook appears to be positive.

Moody’s projects that the economy will recover over 7 million jobs by the end of the year, with a return to pre-pandemic employment levels by the end of 2022. Real economic output (GDP) is expected to close out the year with a 6.4 percent increase (throughout the entirety of the year) and continue to grow by about 5.3 percent in 2022.

Additionally, about $1.6 trillion in federal fiscal assistance will soon be paid out by the federal government, including $65.1 billion to county governments under the State and Local Fiscal Recovery Fund (a part of the American Rescue Plan). These funds will help counties, who are uniquely positioned to drive economic recovery, further support local communities in responding to the pandemic.

The combination of positive economic signals from quarter one and the optimism derived from anticipated federal assistance are prime drivers in this overall optimistic outlook. This optimism has manifested in the April Employment Situation through an uptick in the labor force participation rate, increased employment figures and strong indicators of the pandemic’s waning impact on the labor market. However, April’s report also serves as a reminder that the economy is unsteady and still a long way from recovery.