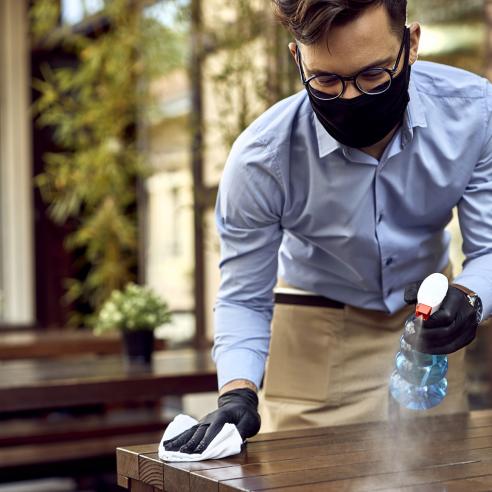 Reversing course from slight increases in local government employment in August, the September jobs report from the U.S. Bureau of Labor Statistics (BLS) showed a decrease of 134,000 local government jobs. This includes education-related jobs which reportedly declined by 231,100 jobs in September, offset slightly by marginal increases of 96,400 in non-education jobs.

The unemployment rate fell to 7.9 percent in September, a 0.5 percentage point decrease from the previous month, indicating a slowdown in economic recovery. Despite positive trends on many indicators in recent months, all signs point towards a shaky ending to 2020 unemployment levels with many sources predicting a return to normal economic levels not occurring until at least 2022 or mid-2023.1 2

Despite a decrease in the unemployment rate to 7.9 percent in September, unemployment levels remain 4.4 percentage points higher than February levels. This .5 percentage point change from August levels is the lowest increase the economy has experienced thus far during the pandemic, likely exhibiting the beginnings of a slowdown in recovery efforts. During the great recession, the unemployment rate took 89 months to return to pre-recession lows as the effects of the recession lingered. Despite many differences between the two recessions, the great recession points to a long and unsteady recovery process with the circumstances of the pandemic further compounding the uncertainty of this crisis.

Nationally, 661,000 jobs were added to the economy in September though 12.6 million Americans remain unemployed. This increase makes September the sixth consecutive month of increased employment. The number of workers who were permanently laid off also increased for the sixth month this year by 345,000 and has risen by a total of 2.5 million jobs since February, demonstrating that workers returning from temporary layoffs have been driving the increases in employment since April.

In contrast to the local government sector, the August jobs report suggests other major industries continued to recover, despite substantial gaps that exist between February and September levels.

Even though there has been a steady increase in employment each month since April, the nation is far from recovering. The BLS reported that the number of workers on temporary layoff decreased by 1.5 million – driving the jobs growth seen in September. On the other hand, the number of workers who permanently lost their jobs increased by 345,000 to 3.8 million – totaling 2.5 million people higher than in February. Though indicators appear to be normalizing with non-temporary layoffs significantly declining, the steady increase of permanent job losers furthers the concern of a plateau in recovery efforts that may likely be long-lasting.

In April, unemployment was driven by temporary layoffs, which made up 88 percent of the 20.6 million job losses (by contrast, temporary layoffs comprised only 29 percent of all job losses in February). Since April, the overall number of laid-off workers has been steadily decreasing, as has the number of workers on temporary layoff. Permanent job losers, however, have been increasing each month since February (except for July). In September the share of permanent job losers (9.1 million) comprised 41 percent of laid-off workers—an increase of 2.5 million since February. Thus, the 11.5 million workers seen returning to work since April are primarily workers ending their periods of temporary layoff. The ever-increasing 2.5 million workers who have been permanently laid off since February underscores a more accurate picture of COVID-19’s longer-term economic toll and true job loss. Long term unemployment increased by 781,000 jobs between August and September, now 1.3 million above February.

The Coronavirus pandemic is preventing workers from finding jobs

The BLS recently added supplemental information on the pandemic’s direct impact on the labor force. In September, approximately one quarter (22.7 percent) of workers teleworked at some point due to COVID-19. Over 19 million workers in September reported that their employer closed or lost business during the pandemic, not allowing them to work their full number of hours. Finally, 4.5 million people were prevented from looking for work due to the pandemic, meaning they were not counted as unemployed or part of the labor force (since a person must be actively looking for work to be counted as unemployed).

Overall, the September jobs report reveals a national economy that displays indicators of a slowing recovery. Months ago, the federal government invested trillions of dollars to prop up the economy and now the economy may be losing steam in the uphill climb out of the recession. Without additional funding, essential local government services and workforces may face additional cuts, further weakening the U.S. economy and the nation’s ability to recover.