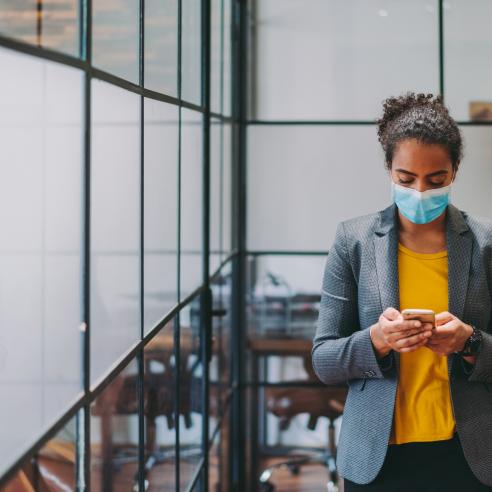 December marks the first month of decrease in employment figures since the staggering losses of over 20 million jobs in March and April. According to the Bureau of Labor Statistics December Employment Situation report, national employment decreased by 140,000 jobs in December. Though the overall number of jobs in the labor market decreased, the unemployment rate did not change from its November level of 6.7 percent. The decline in jobs experienced in December is driven by decreases in leisure and hospitality (-498,000), education and health services (-31,000) and government sectors (-45,000) including state (-19,000) and local government (-32,000) job losses. 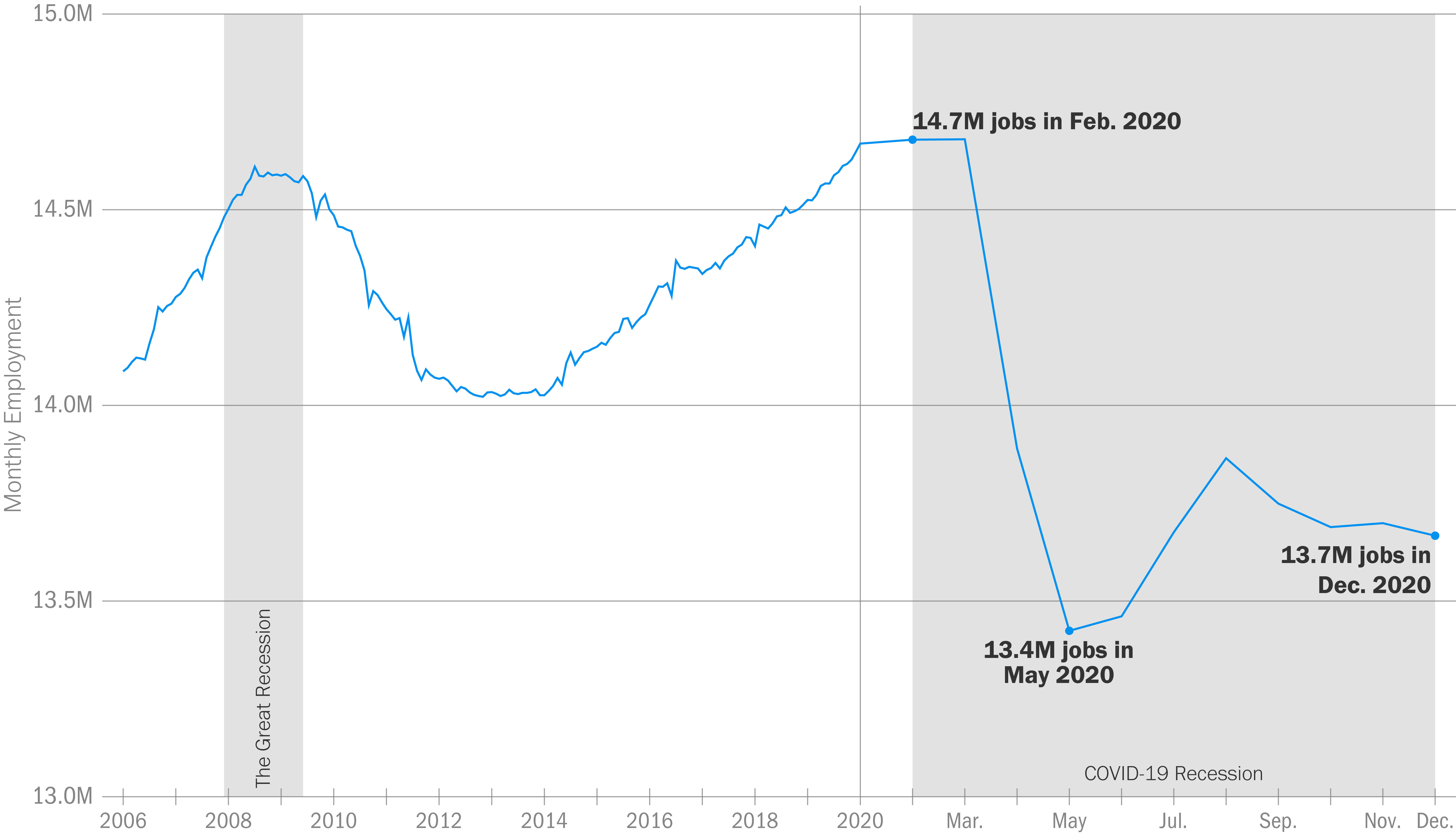 The compounding local government job loss experienced in the last few months is likely due in part to the continuing financial impacts of the coronavirus. Despite recent reports indicating local government tax revenue has not had a significant impact, many counties are suffering financially. In fact, a recent NACo survey reveals 75 percent of county government respondents reported negative impacts to their financial health due to COVID-19. Additionally, the same survey found 52 percent of county respondents reporting their government has cut the workforce with moderate or significant measures (including layoffs or furloughs). County governments were relying on direct, additional federal aid to support continuing services to over 300 million residents. Seventy-seven (77) percent of county respondents to the survey indicated if congress did not pass an additional stimulus, their county’s condition will worsen. December’s job report illustrates this impact coming to fruition as county governments were, in the final moments, excluded from the most recent Congressional stimulus deal despite overwhelming evidence supporting county need.

December’s continued decline in local government employment also carries broader economic implications that produce reason for concern. In the wake of the Great Recession, it took 133 months (11 years and 2 months) for local government employment to return to pre-recession levels. Counties services and employees play an essential role in supporting local economies across the nation and local government job loss equates to a reduced ability for counties to support local communities both from staffing and financial perspectives. As such, counties have been forced to cut services important to sustaining local communities including economic and community development, the justice system and other key services. The impact of reduced services and staffing on local communities trickles up to the broader economy, curtailing national economic recovery.

many industries gain jobs in December despite national job loss

Over the month, the majority of the national decline was driven by losses in the leisure and hospitality industry. The private education industry, as well as federal and state governments, also saw significant declines in employment. Retail trade, professional and business services, construction, and transportation and warehousing all reported gains in December.

OTHER KEY FINDINGS FROM THE EMPLOYMENT SITUATION

The employment situation also provides a look into other key labor market indicators. The number of persons who reportedly teleworked in December rose to 23.7 percent, reflecting December’s rise in both coronavirus cases and deaths in many areas across the country, as well as increased uncertainty due to reports of a new variation with higher transmissibility. In December, the number of persons not in the labor force and prevented from looking for work due to the ongoing pandemic increased by 700,000 to 4.6 million. These individuals were not counted as unemployed due to the inability to look for work.

Similarly, the labor force participation rate remained deflated from pre-pandemic levels. This indicator reflects the number of individuals in the US which are employed or actively looking for work – discouraged workers leaving the labor force reduce the labor force participation rate. In December, the labor force participation rate was 61.5 percent, which is 1.8 percentage points lower than February – this equates to about 3.7 million discouraged workers who have left the labor force since February. Temporary and permanent layoffs also indicate labor market health. In December, the number of workers who were considered temporarily laid off increased by 277,000, now at around 3 million. As with other indicators, the increase in temporary layoffs provides insight on labor market fears with the ongoing pandemic’s spread and impact. Due to this increase in temporary layoffs, the number of persons jobless for less than five weeks also increased by nearly 450,000, now at 2.9 million in December. Conversely, the number of persons who experienced permanent job loss in December dropped by 348,000, now at 3.4 million. Though this indicator is trending in a positive direction, it remains about 2.1 million higher than February levels. The number of workers who have been unemployed for 15 to 26 weeks also decreased in December by 303,000, now at 1.6 million. The number of long-term unemployed persons (unemployed over 26 weeks) was largely unchanged from the previous month but remains 2.8 million higher than pre-pandemic levels.

The December employment situation indicates a pause in the promising economic rebound. Last month marked the first drop in the employment levels since the devastating loss of over 20 million jobs across industries in March and April. Though the unemployment rate remained unchanged at 6.7 percent, it is higher than February levels (3.2 percentage points higher) and 10.7 million Americans remain unemployed. Moody’s Analytics projects the economy will not return to full employment until the end of the year in 2023, or almost two years from now. Over the month, the nation saw a resurgence in COVID-19 cases; as a result, states and local governments were forced to impose additional restrictions (such as reduced indoor dining and increased capacity limits in restaurants) to mitigate further spread. These measures largely impacted workers in the leisure and hospitality industry with the largest decline occurring in food services and drinking places. Furthermore, these measures continue to impact local government revenues from sales taxes, permit fees, parking fees and hotel fees and taxes. Local governments must balance their budgets and thus resort to spending cuts such as layoffs, furloughs and service reductions amid revenue gaps. As noted previously, one in every ten jobs lost during the pandemic has been a local government job.

Last month, Congress passed a $900 billion pandemic aid package that does not address local government revenue shortfalls, though provides relief to households and businesses, additional support to unemployment benefits for laid-off workers and supports vaccine distribution. Local governments are at the forefront of this public health crisis and need further aid as they are facing higher service demands and expenses, as well as tight budgetary conditions across the board. Disruptions due to spending cuts from local governments can impact the trajectory of national economic recovery. Thus, the absence of federal aid amid growing fiscal constraints will further exacerbate the current economic downturn.