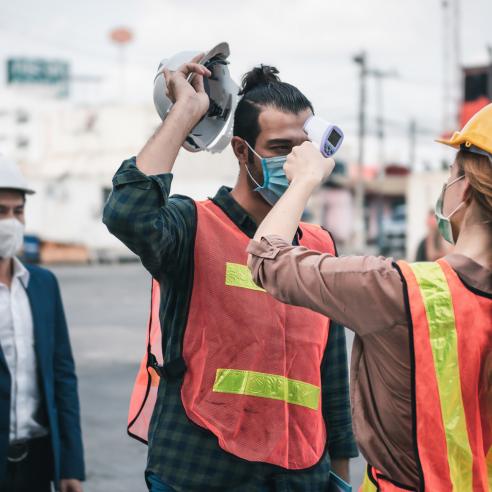 Nationally, 1.4 million jobs were added to the economy in August, leaving 13.6 million Americans still unemployed. Though this increase makes August the fourth consecutive month of increased employment, the number of workers who were permanently laid off increased for the fifth month this year, topping 3.4 million, and demonstrating that workers returning from temporary layoffs have been driving the increases in employment since April.

In contrast to the local government sector, the August jobs report suggests other major industries may be moving toward a slow recovery, despite substantial gaps that exist between August and February levels.

Nationally, 1.4 million jobs were added to the economy in August. This leaves 13.6 million Americans still unemployed - 7.8 million more than there were in February. The unemployment rate fell to 8.4 percent – finally falling below the Great Recession high of 10 percent for the first time since March 2020.

Even though there has been a steady increase in employment each month since April, the nation is far from recovering. The BLS reported that the number of workers on temporary layoff decreased by 3.1 million – driving the jobs growth seen in August. On the other hand, the number of workers who permanently lost their jobs increased by 534,000 to 3.4 million – totaling 2.2 million people higher than in February.

In April, unemployment was driven by temporary layoffs, which made up 88 percent of the 20.6 million job losses (by contrast, temporary layoffs comprised only 29 percent of all job losses in February). Since April, the overall number of laid off workers has been steadily decreasing, as has the number of workers on temporary layoff. Permanent job losers, however, have been increasing each month since February (with the exception of July). By August, workers who lost their jobs permanently made up 40 percent of the 10.3 million laid off workers after increasing by 2.2 million since February. Thus, the 10.3 million workers seen returning to work since April are primarily workers ending their periods of temporary layoff. The ever-increasing 2.2 million workers who have been permanently laid off since February represents a more accurate picture of COVID-19’s longer-term economic toll and true job loss.

The BLS recently added supplemental information on the pandemic’s direct impact on the labor force. In August, approximately one quarter (24.3 percent) of workers teleworked at some point in August due to COVID-19. This measure is down slightly from July, when 26.4 percent teleworked. Over 24 million workers in August reported that their employer closed or lost business during the pandemic, not allowing them to work their full number of hours. Finally, over 5 million people were prevented from looking for work due the pandemic, meaning they were not counted as unemployed or part of the labor force (since a person must be actively looking for work to be counted as unemployed).

Overall, the August jobs report reveals a national economy that displays indicators of recovery, but is largely unstable. Over the course of the pandemic, the federal government has invested trillions of dollars to prop up the economy. With funding from the Coronavirus Relief Fund (CRF) distributed and helping recipients temporarily hold together the economy, local governments are in need of additional direct and flexible federal aid to avoid further layoffs and rebuild workforces. Without this funding, essential local government services and workforces may face additional cuts, further weakening the U.S. economy and the nation’s ability to recover.