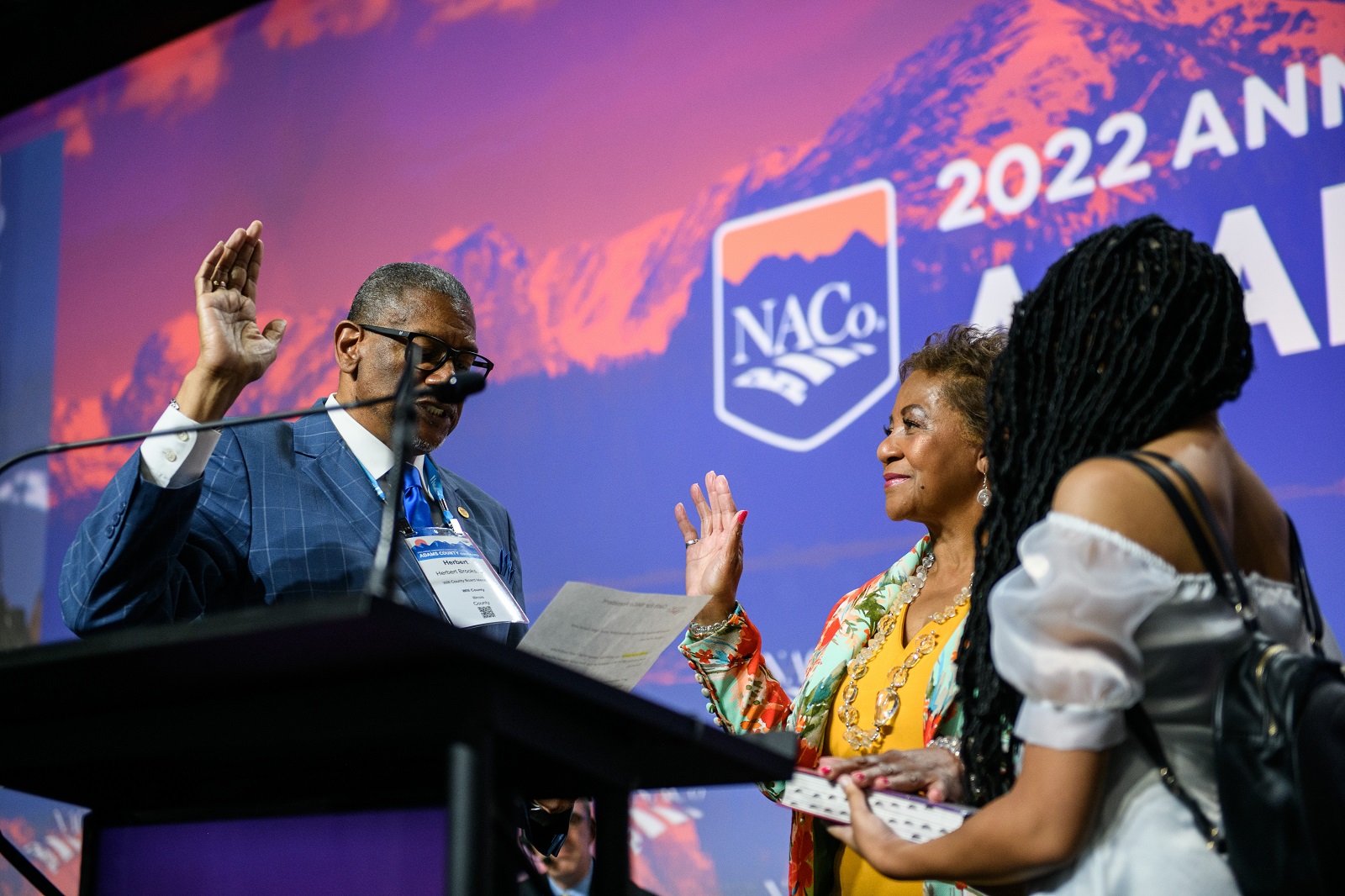 But not so she can get through a crowd. When someone comes into her office to talk, everything between her and her visitor parts when she cleans off her desk.

“I’m not answering the phone, I don’t want any papers on the desk,” she said. “Whoever is sitting in front of me gets 100 percent of my attention.”

It takes a lot of planning to allow her that kind of focus. A clock in her bathroom lets her know exactly how much time she has to get ready in the morning before dropping her granddaughter off at school and then to her Will County, Ill. office. When she arrives, she writes herself a note about what she wants to accomplish as a Board member and now, as NACo’s president.

It might be connecting with the family of a constituent who had recently died. It could be attending local meetings, where she thrives in one-on-one interactions. And now, it will be traveling the country, introducing new people to Will County.

The energetic start of her NACo presidency is a stark contrast to her youth, when she would leave Joliet, Ill. for a summer with her grandparents downstate in Carbondale, where she was born.

“It was nice to come home and power down because it was very slow,” she said. “We’d do a lot of things down there we couldn’t in Joliet, and it gave me a different experience.”

“I love looking at a person individually, how they can be more effective as an individual and how their interactions with their leadership team can improve,” she said.

While she enjoyed her corporate career, once she had raised her only daughter, Lisa, Winfrey entered public service, something she had planned for years. As a child, she and her brothers accompanied her parents when they campaigned for the first county Board member of color.

“I can remember being little in the back seat of the car, my two brothers and I were putting together pamphlets, my mother’s driving and my dad is knocking the doors,” she said. “I learned that if you wanted something to happen, you have to be involved, you have to be around, you have to advocate. You can never stop pushing, but you don’t have to shout in people’s faces. You do have to be engaged, though.”

Winfrey had been a member of the Rotarians, where a colleague suggested she serve on the Joliet Township Board.  She relished being a connector, helping residents access services that would improve their lives and giving them a voice in government. The opportunity to understand someone’s problems gave her the chance to put them in a place to succeed. Then, in 2009, she filled the term of her late representative on the Will County Board. She got involved with NACo soon after.

“I enjoyed seeing how other counties had their own challenges, but in the end, each county is a microcosm of the whole country,” she said.

She served on NACo’s Community, Economic and Workforce Development Steering Committee, Large Urban County Caucus and the Membership Standing Committee. Before she was appointed to the Board of Directors, she attended meetings so frequently that many assumed she already had a seat.

She considered running for the executive position, but she was all-in on NACo. While a woman of color had not previously been Will County executive, the opportunity to represent the county nationally was too much to turn down.

During her inaugural address at the 2022 NACo Annual Conference, she acknowledged Genesee County, Michigan’s Charlotte Williams distinction as the first African American woman to hold the NACo presidency, in 1977-78.

“It means a lot not only for me, but for our county,” she said. “We’re not as large as Cook County or Lake County, and it means a lot for a smaller county like mine to have some national representation.”