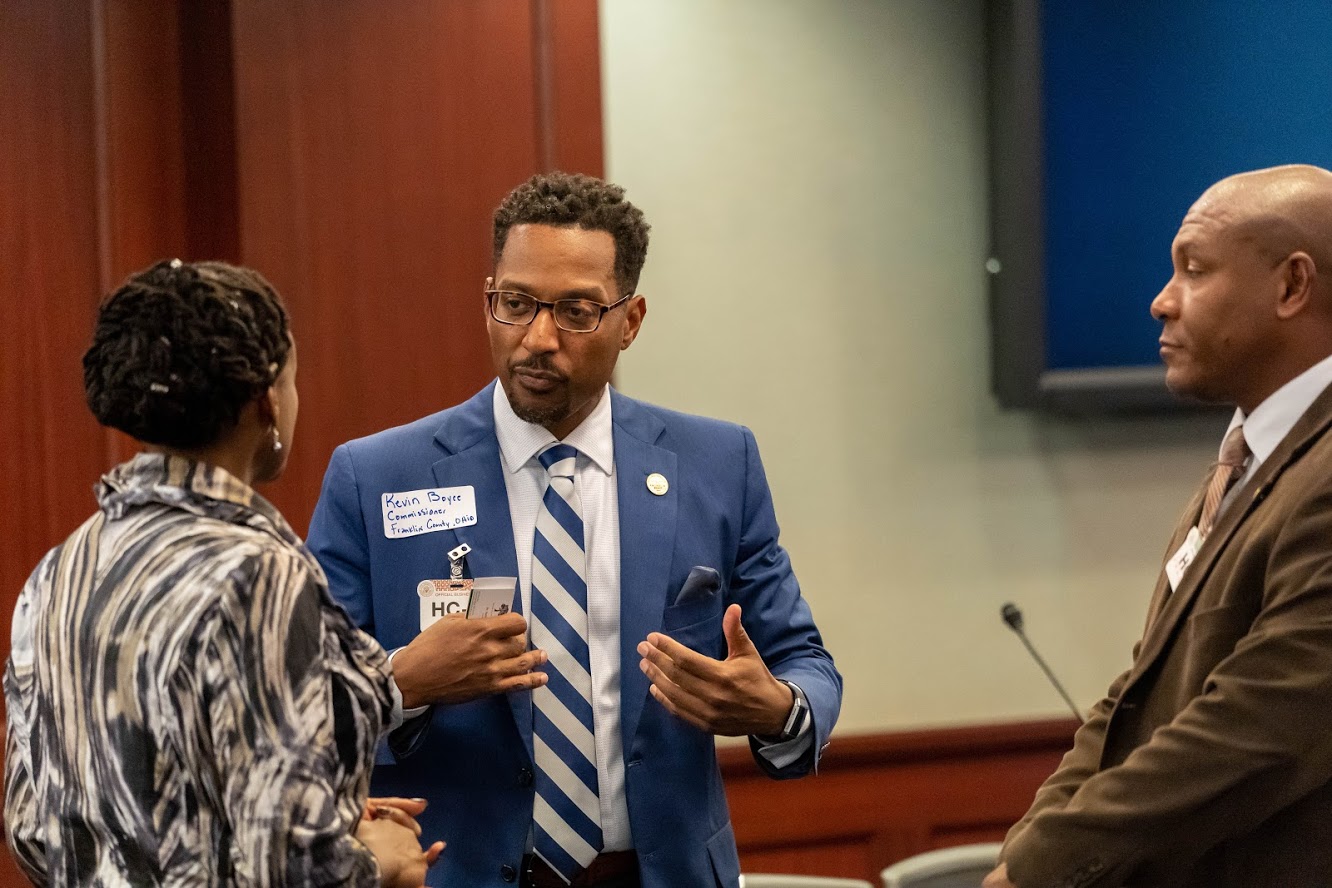 Kevin Boyce has served in state, city and county government and if the Franklin County, Ohio commissioner is sure of anything, it’s that you can’t legislate morality.

That isn’t to say there’s no role for government in fighting racism and working toward racial equity. It just requires the right perspective and patience.

“This idea that we can do something with policy or legislatively is a false sense of security,” he said, but adding “I do believe public policy and the actions that we take can be the catalyst to changing long-term situations.”

View some of the archived discussions and new ones, Wednesdays this summer at 3 p.m. Eastern

Franklin County has taken some of those steps, from a declaration of racism as a public health crisis to a 10-year, $25 million commitment to address the causes of poverty and the racial wage gap. But to complement that “long game,” Boyce says counties can best create an atmosphere in which people engage with one another, and he’s doing that most Wednesday afternoons.

“We’re hoping it’s the conversation that happens at the barber shop or the community center or church,” Boyce said. “The kind of conversation you hope carries on for the people who were watching, spurring additional conversations and self-reflection.”

He started with a series of three video conferences a few weeks after George Floyd’s death in Minneapolis, but Boyce said viewership numbers convinced him to extend the series through the summer.

For example, during the June 17 discussion, behavioral healthcare practitioner Jerry Saunders chimed in to voice his optimism that recent events in the United States’ racial awakening following this spring’s police abuses of Black men had galvanized a younger generation.

“Brown v. Board of Education was 1954, when we switched away from ‘separate but equal,’ and it said ‘with all deliberate speed,’ but we’re over 60 years later and we still don’t have that equality,” Saunders said. “They’re busy making a change and they want immediate action. And I see it in them, and I think it’s great. I don’t have a question mark, I have an exclamation point.”

The format ranges from discussions Boyce moderates to fielding questions from the audience, and the panel shifts as Boyce finds personalities and perspectives to feature.

Boyce plans to take some of the promising ideas that come out of conversations — like providing capital for minority entrepreneurs, home ownership strategies and fresh food options in food deserts — to the county’s innovation center, a two-year-old think tank that will help the concept find legs in the community.

“The pandemic of racism had been ravaging our country, no matter what part of the country you turn to, it’s very much a part of the social construct and some of the challenges that we face from poverty to all the social determinants of health,” he said. “There’s a role for all levels of government to play, some is rooted in economic contributions, some of it is rooted in policy and some is rooted in political and social contributions. It will be important going forward for us to bring them all together in a strategic way.”

Where he wants to be

A Columbus native, Boyce was appointed to the City Council and won reelection twice before being appointed state treasurer in 2009. He was then appointed to the state House in early 2012 and won two additional elections before running for the Franklin County Board of Commissioners in 2016. Why county government?

“This issue, poverty and racism,” he said. “I got to the point in my career where I asked, ‘Where can I make the most difference? Where can I have the most impact?’ I really wanted to deal with poverty because it was part of our greatest challenge. The welfare system responds to the symptom, rather than the cause, so the county is where you can change that narrative and be a ‘difference maker.’”

County service was exactly what he thought.

“I think the county is doing exactly what I wanted to be doing,” he said. “Moving the needle on the quality of life for people.”

Again, he keeps it in perspective.

“You can’t reverse 100 years of building and planning overnight, you can’t undo the destruction of neighborhoods when an interstate is built,” he said. “You can work toward fewer manufactured barriers between neighborhoods, making communities more walkable and keeping them from putting up the walls between them.

“It starts with how we do business and how we recognize racism in our own community,” he said.

Boyce said that the buy-in from white colleagues in county government was perhaps even more crucial than action by Black county officials.

“A lot of people ask me, particularly white people, ‘What can I do?’” he said. “I think white people are more important in terms of racism. I really feel like the greatest impacts will be my white counterparts.”

He praised fellow commissioners John O’Grady and Marilyn Brown for their eagerness to address racial inequality in Franklin County.

“We don’t have to agree on every single element, but they’re committed in a sincere way,” he said.

Though the COVID-19 pandemic has disrupted three of the systems in which Boyce hopes to affect change: Affordable housing, employment and public transportation, he sees the crisis highlighting the inequalities in Franklin County and galvanizing public support for change.

“The pandemic has enhanced the urgency of the blueprint,” he said. “It was an organic endorsement of what we’re doing. You can write it down, but then when a pandemic brings to light how one group of people is more vulnerable because of these social determinants of health, that gets people’s attention in a way you didn’t have it before. It’s enhanced the conversation around it.”

And so, he asked his guests June 17, “Is this a new chapter in American history, is this a new day in front of us?”

Reynoldsburg City Schools Superintendent Melvin Brown answered: “I’d like to think it is, the fact that it’s being driven by so many young people who seem to have a different perspective on the world and on life than some of us older folks do. They seem much more connected to each other, they seem much quicker to defend each other.”

Brown detailed the mid-June conditions that gave him optimism, mirroring Boyce’s — the COVID-19 situation, the economic upheaval, national strife and the motivation to make a change.

“I think all of these things have led to a convergence that feels like a movement.”