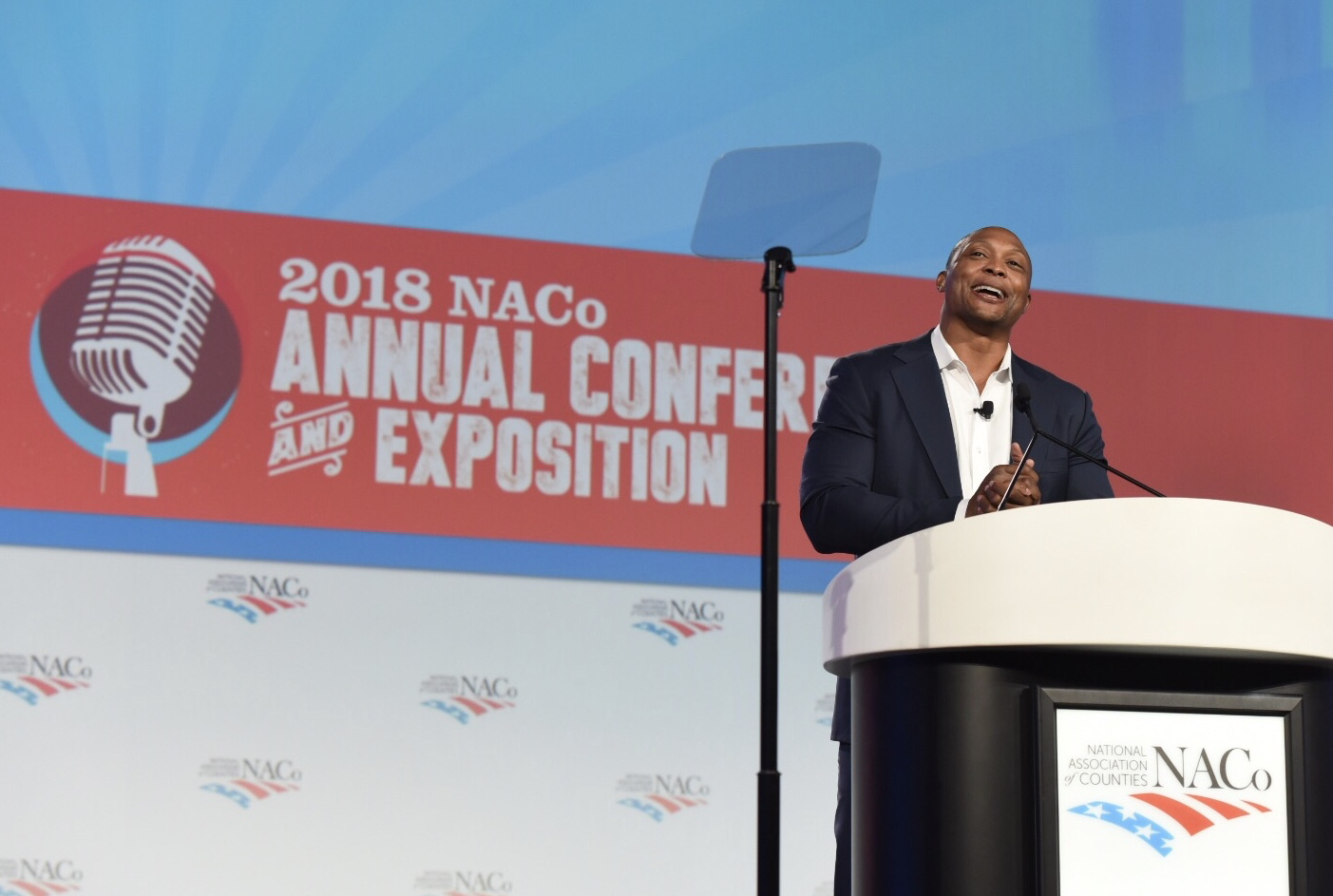 NFL legend Eddie George talks about the challenges he faced after his football career with NACo members July 14. Photo by Jessica Yurinko

In order to filter by the "in queue" property, you need to add the Entityqueue: Queue relationship.
Eddie George's transition away from the NFL prompted him to seek emotional support, find new intellectual, business and personal challenges

Eddie George is a football player. Ask almost anyone about him and that’s what they’ll say. That’s what he said, up until he was 31, when a mental lapse during a drill, while playing out a bad season, forced him off the field.

He was too busy griping to himself that he shouldn’t be running plays for the scout team, typically the role given to backup players. He didn’t pay attention to the play call and took a guess as to which way he was supposed to carry the ball. He guessed wrong.

“George! Get the hell off my field, you’re messing up my drill,” two-time Super Bowl-winning coach Bill Parcells yelled.

Suddenly, the man who won the Heisman Trophy at Ohio State and was the face of the Titans when Tennessee’s still-new NFL team played in one of the most exciting final quarters of the Super Bowl was on his own.

“They say an athlete dies twice,” he told the Opening General Session audience at NACo’s Annual Conference July 14. “As an NFL athlete, that being you created is now done. You’ll never compete on that level as an athlete. That’s literally like watching a loved one die.” George’s drive to play football stemmed from a hope that it would strengthen his relationship with his troubled father, striving to be the player his dad talked about instead of the legendary Jim Brown.

“Some handle (the end of their playing careers) better than others,” he said. “For me, why I played the game, it cut a lot deeper. I had to reposition, readjust my entire life at the end of my career, be focused about what I wanted to do and how I thought about myself.”

Through counseling, he pulled out of a depression, started a landscape architecture business, a financial advising business, an acting career and was a present father, husband, friend and family member. And 14 years later, he lives by four pillars that allow him to thrive.

Mentally, he allowed himself to shed the “me against the world” mentality that drove his collegiate career. He acknowledged that a man needs help to get through life, and therapy was crucial to maintaining his mental health.

“We think we can force things through by ourselves,” he said. “We probably can, but it will tear your soul apart and it will compromise your health. It’s okay to say, ‘I need help.’ There’s more strength in that than trying to force yourself through life.”

He continues a rigorous physical training regimen that he hopes will keep him alive to see his great-grandchildren, and also to soothe the aches from a bruising football career.

“To achieve the things that I want to do in life, I have to make sure I get my rest, get my exercise in,” he said. “I played every game for eight and a half years, and as soon as I stop (the routine) I feel every bit of it.”

George credits his relationship with God for keeping him spiritually centered and aware of his place in the world. At the same time, he also keeps that place in the world moving by surrounding himself socially with people who challenge and keep him accountable.

“If you’re the smartest person in the room, you need to get a new group of friends,” he said.