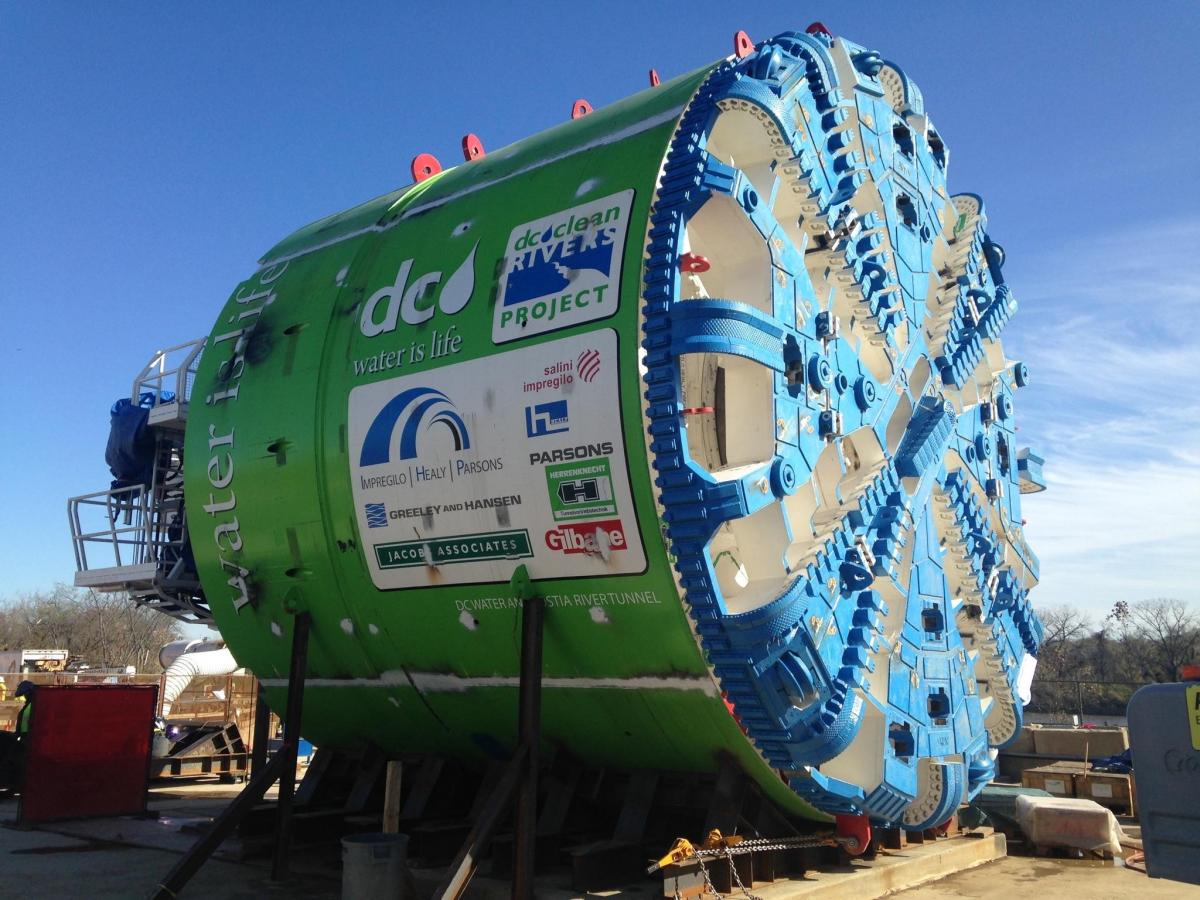 Digging floodwater tunnels under Harris County will require the use of a large boring machine, like Nannie, picutured above, which dug a 26-foot tunnel diverting sewage from the Anacostia River in Washington, D.C. Photo courtesy of D.C. Water.

The Harris County Flood Control District is working on a plan to divert floodwater using a series of tunnels beneath the low-lying county, which has been increasingly inundated with collected rainfall.

Sometimes a widened creek does the job to alleviate flooding. Perhaps a stormwater detention feature does the trick. Or maybe, if you’re Harris County, Texas and facing massive floods every hurricane season, it’s time to start thinking about digging enormous underground tunnels.

The Harris County Flood Control District is in year two of a study to figure out where larger tunnels could best divert millions of gallons of floodwater, saving lives and untold amounts of property damage annually. A successful 2018 bond measure gave the district $2.5 billion, but also an expectation that it could ameliorate flooding problems. The measure came on the heels of Hurricane Harvey, which dumped more than 1 trillion gallons of water on the county in four days the previous year.

“We were charged with being innovative, to come up with new technologies,” said Scott Elmer, assistant director of operations for the flood control district. “The bond came with a high degree of trust that the citizens invested in us, it’s something we have to deliver on.”

The flat coastal region that Harris County calls home is dotted with bayous and wetlands that have demonstrated for millennia how hard it is naturally to move water away. Add in 22 different watersheds in the county and the hundreds of municipal and special utility districts responsible for managing development and the 34 different floodplain administrators and the flood control district can often find itself penned in by chaos, trying to move away excess water from Hurricane Harvey, Tropical Storm Allison and any number of heavy rains.

The region’s development, notoriously unguided by zoning, only makes the task harder.

“Predicting future land use and development is not as easy when you don’t have an overarching comprehensive plan of development,” Elmer said. “There are a lot of constraints on implementing our traditional methods of flood control in a densely developed urban environment.”

“We’re getting to the point where the engineering and constructability of large-diameter deep tunnels have really advanced a lot in the last 20 or 30 years,” Elmer said.

The first phase of the study determined that geological conditions work in favor of large tunnels, and they would be capable of carrying enough water to address the kind of flooding the region has seen recently. The study is currently determining which of those 22 watersheds would be best served with large tunnels.

“There’s no denying the fact that tunnels are an expensive technology, but in general, we can deliver a tunnel quicker than a traditional program that would achieve the same level of benefits,” he noted.

It’s a long process, and one that won’t show any performance improvement until completion, compared to traditional remediation methods that can be done incrementally, like creek widening.

“If you have no budget limitations and you start a tunnel today, you’re still looking at 10 years until a finished project is in the ground,” Elmer said. “But at the same time, traditional methods could take up 2,900 acres in what a tunnel could accomplish in 27 acres. That’s a lot of property we don’t have to acquire and take off the tax rolls.

“It’s a much smaller footprint and much less of an impact to our citizens.”

Similar tunnels have been successful in diverting excess storm water and sewage in Dallas, San Antonio and Austin in Texas and in Washington, D.C.

So far, the flood control district has funded studies with the Economic Development Administration and Community Development Block Grant funding, but the tunnel projects have been projected to cost $1.5 billion.

“If I had to guess 10-15 years down the road where we would be, it would be having a spine tunnel to start serving and getting relief and serving to bring branch tunnels to that spine where the water can empty out into bayous and waterways without negative impact,” Elmer said.

“I honestly do believe tunnels can work in the Harris County region,” he said. “I believe they provide transformational means of flood control. I believe that they are complex and they are expensive, but I think they will be one of the bigger tools in the future for us to utilize.”