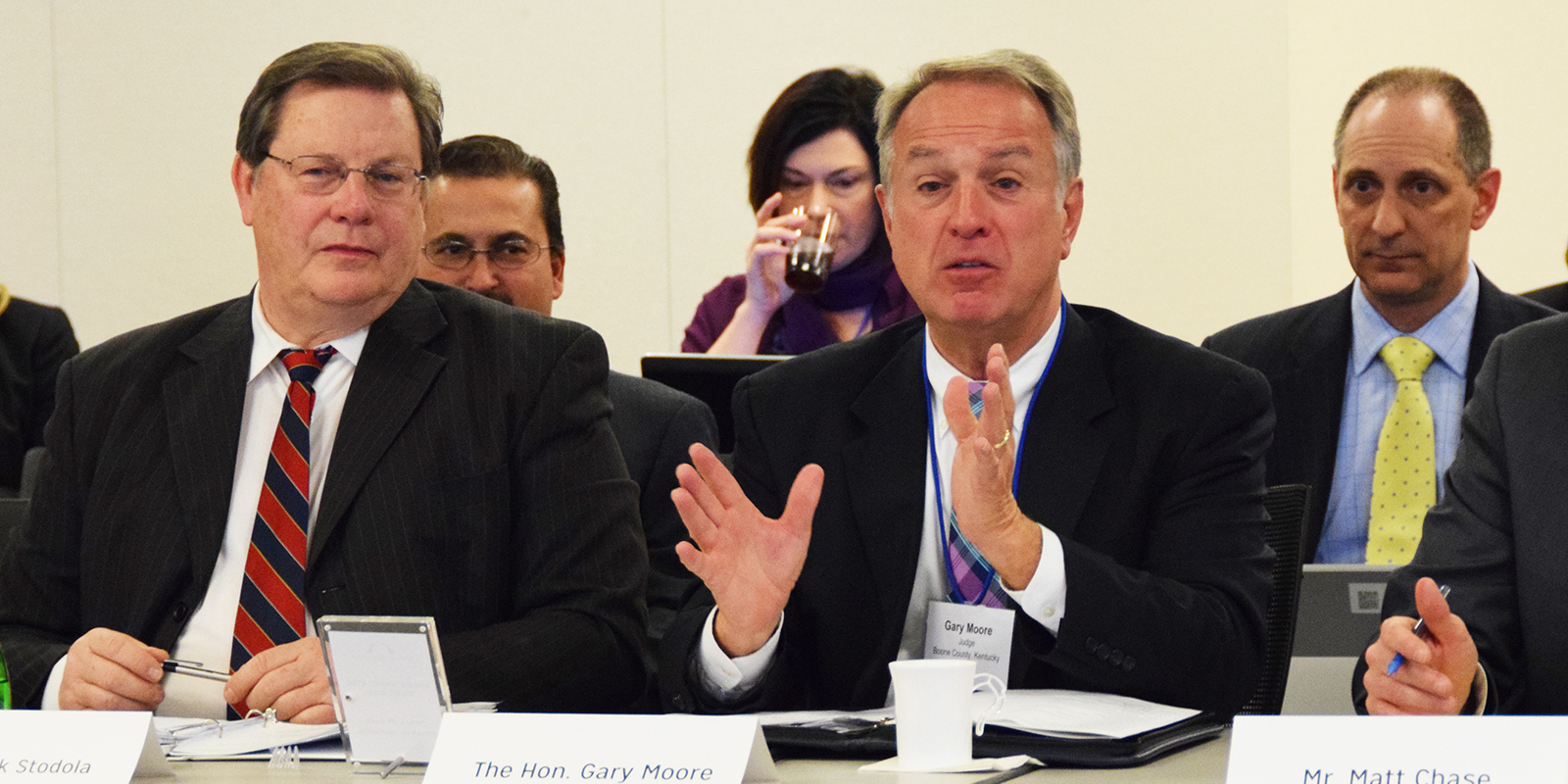 A toolkit for counties, a social media strategy, one voice with one message on the national level — these are a few of the hoped-for outcomes from members of the National City-County Task Force on Opioid Abuse that met for the first time April 7 in Washington, D.C.

A joint effort by NACo and the National League of Cities (NLC), the task force was formed to foster collaboration and ramp up local leadership in the fight against prescription drug abuse and heroin use.

There are 11 deaths per week from drug overdoses in Erie County, N.Y. — more than enough to move Erie County Executive Mark Poloncarz to issue an emergency executive order in January, in part to draw attention to the overdose outbreak and in part to mobilize the county’s resources to tackle the escalating loss of life.

Poloncarz’s story was one of many anecdotes from city and county leaders grappling with the opioid epidemic in their communities.

On their agenda were three discussion topics: prevention and education; treatment; and public safety and community well being.

To set the stage, members were first presented with a big data picture on the growth of the heroin epidemic, a trail of despair and death that has moved out from an urban core into the nation’s suburbs and rural areas, killing more people in 2014 than automobile accidents. Drug overdose was the leading cause of accidental death in the U.S., with 47,055 lethal drug overdoses in 2014, according to the American Society of Addiction Medicine

The mapped review of the spread of heroin and pain prescription abuse, by Chris Reith from Socrata, a cloud software company focused on digital government, sparked discussion about the accuracy of the data

used to illustrate the locations and penetration of prescription drug and heroin abuse. “Some communities underreport their overdoses,” said Manchester, N.H. Police Chief Nick Willard, afraid that accurate reporting would reflect poorly on their cities and counties and make them less attractive places for business.

Even with possible underreported data, the maps Socrata had prepared (based on CDC data) showed the dramatic spread of abuse over the last decade and a half.  A CDC report has stated, “Since 2000, the rate of deaths from drug overdoses has increased 137 percent, including a 200 percent increase in the rate of overdose deaths involving opioids (opioid pain relievers and heroin).”

Robert Morrison, executive director, National Association of State Alcohol and Drug Abuse Directors (NASADAD), led the discussion on prevention and education. In Morrison’s opening remarks, he said NASADAD is working “to elevate prevention as a core part of our strategy to combat the opioid epidemic.”

Morrison urged task force members to take control of their communities and “not let drug overdoses become the norm.” He also urged them to institute an addiction initiative “because in five to 10 years, there will be  another epidemic.”

HELP FROM THE FEDS

Addiction treatment was next on the agenda, focused primarily on medication-assisted methods such as methadone and Suboxone.

Treatment professionals have a nearly a 50-year history with methadone and a shorter time, 10 years, with Suboxone, but enough in both cases to know that mortality rates from all causes are reduced in half and the risk of HIV infection is also halved, said Melinda Campopiano, medical officer at the Substance Abuse Mental Health Services Administration (SAMHSA), who led the discussion.

The presentation prompted a lively discussion about stressed capacity

“In Multnomah County, there are way more people seeking treatment than slots available,” Multnomah County Commissioner Judy Shiprack said.  Judge Moore said the methadone clinic in his county sees 1,000 to 1,100 people a day, and the community is beginning to push back, afraid that centralizing treatment will increase crime rates in the area.

The final discussion took its color from the streets of Manchester, N.H., as Police Chief Nick Willard, who led the Public Safety and Community Wellness discussion along with Kern County, Calif. Supervisor Leticia Perez, described his department’s efforts to stem the drug traffic in his city and the philosophy that guides it.

“Addressing opioid abuse is not just getting the bad guys off the street, but it’s providing social interventions as well,” he said. Willard also talked about his department’s child advocacy program that “circles back with services after a SWAT raid,” its recovery coaches and the importance of having peer-to-peer programs for children and youth in any prevention efforts.

Yet, getting the “bad guy” off the street was clearly an important objective as illustrated by Willard’s recitation of a long list of arrest and drug seizures numbers. In the end though, “despite law enforcement’s best efforts, we’re not winning.”

Help from the Feds

Several executive branch agencies have announced initiatives to attack various facets of opioid and heroin abuse, many of which will reach the county level. These were announced at the National Rx Drug Abuse and Heroin Summit in Atlanta in March