Boone County, Ky. Judge-Executive Gary Moore, with his wife Linda standing by his side, took the oath of office and began his NACo presidency July 20 during NACo’s first-ever virtual Annual Business Meeting. This was the first time in the association’s 85-year history that the meeting was held online, with more than 1,000 county officials and others participating, due to the coronavirus pandemic.

“I couldn’t be more excited to see you become the top guy at NACo,” McConnell said. “Years ago, I was in county government, so this is very exciting, it’s my honor to swear you in.” McConnell was a county judge, representing Jefferson County, Ky., from 1977 to 1984.

Louisville Mayor Greg Fischer (incoming president of the U.S. Conference of Mayors), Kentucky Gov. Andy Beshear and McConnell all offered their congratulations to Moore in videos played during the meeting.

“Wow, those were some surprises I didn’t know about,” Moore said.

Moore, who is serving in his sixth term as judge executive, announced his presidential priority in his inaugural address to members: The LEAD (leadership, education, action and development) Initiative. Throughout his years of public service, Moore said he has noticed that many individuals do not fully understand county government and how county officials impact their lives.

“I want our residents to know what counties do,” he said. “I want to work with you so you can help your residents better understand how your county touches their everyday lives.”

“Now is a critical time in our nation and in our counties,” he said. “Now is not the time to be passive or idle. Now is the time to act.”

Moore is now the second Kentuckian to ever serve as NACo president. He was first elected in 1998 as judge executive for Boone County, the fourth-largest county and one of the fastest growing counties in Kentucky. He also serves as president of the Kentucky Association of Counties.

Moore has been active in NACo since 2012, previously serving as chair for the Finance Committee, the Transportation Steering Committee and the Environment, Energy and Land Use Committee. He also served as co-chair of the National City-County Task Force on the opioid epidemic and as a member of the Audit Committee.

Following in his father’s footsteps, Moore described how his interest in becoming a public servant stemmed from his father, who served as a deputy sheriff and sheriff in Pendleton County, Ky.

“He was a true public servant who loved helping others,” Moore said of his father. “From those early years, I began to look for ways to serve my community.”

Moore addressed NACo members from the Kentucky Association of Counties headquarters surrounded by his wife and colleagues. He described how July 20 now marks two special occasions in his life— his father’s birthday and the beginning of his NACo presidency.

“Just as my dad inspired me, I encourage you to be that spark that motivates someone in your community to pursue county service,” he said.

“It is a critical time, but it’s our time,” Moore said. “It’s time for America’s county officials to lead.”

Before passing the torch to the new NACo president, Borgeson noted that serving as NACo president “has been the honor of a lifetime. My presidency has been quite unusual to say the least. From personal family issues to a public health pandemic to the fight for racial equality and justice, I can honestly say this year has been challenging, exciting and sad … and yet, I remain optimistic for the future.”

A video of tributes, thanks and congratulations by NACo members, highlighting Borgeson’s year as president, played during the meeting.

In other business during the meeting, Borgeson announced that Douglas County student George Abalekpor was awarded the David Davenport Memorial Scholarship. Abalekpor is a graduate of Millard South High School, where he earned a 4.3 grade average while taking advanced placement courses. 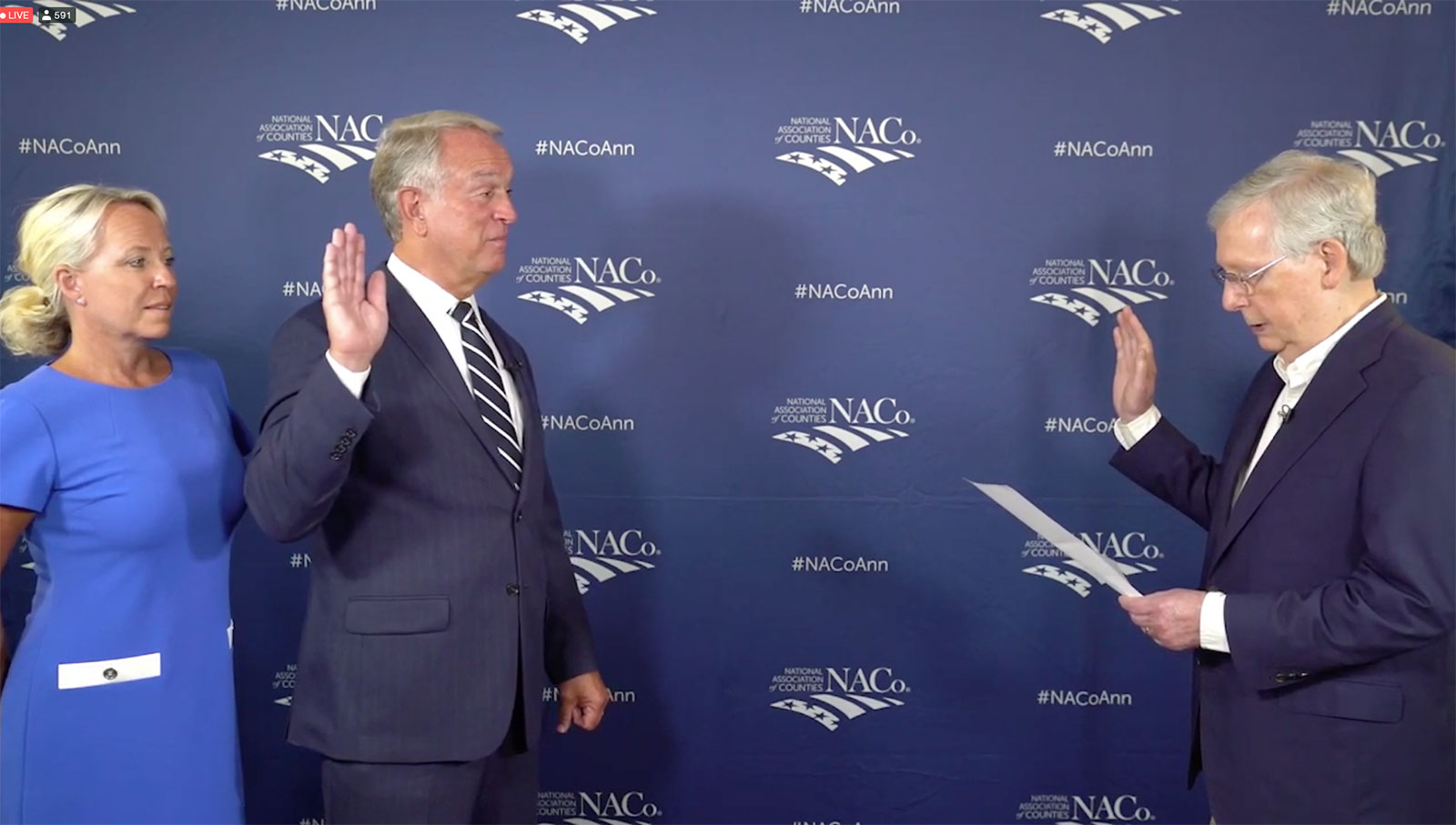