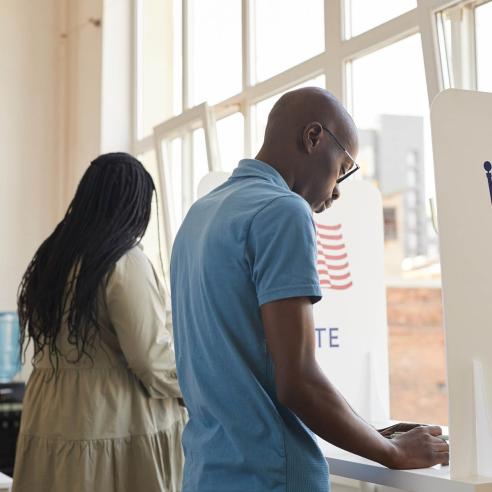 While the bill would allow states to adopt any resulting recommendations or best practices on a voluntary basis, it would mandate several reforms to the administration of elections in Washington, D.C. (D.C.). The provisions placing election-related requirements on D.C. are intended to serve as model legislation for states to adopt in the future. As currently written, counties are concerned that these requirements would impose costly unfunded mandates on counties if a state chooses to enact this model legislation. Additionally, the bill would monetarily incentivize the adoption of certain policies related to voter eligibility in state and local elections by reducing federal funding available for states that do not choose to adopt these policies. Since counties rely on states to sub-allocate federal funding to support election administration and upgrade election infrastructure, this would limit the funding available to counties in states that do not adopt certain policies in H.R. 8528.

In sum, counties are concerned with the limits that would be imposed on the federal supports we rely on to maintain election integrity and security as well as the findings in the bill that presume states hold the primary role in election administration.

This analysis provides an overview of key provisions included in H.R. 8528 and how they may impact county governments.

If enacted, H.R. 8528 would reform federal elections in the following ways that would impact how elections are administered at the local level:

H.R. 8528 would make several reforms to the administration of elections at the state level that would have both a direct and indirect impact on the county role in elections. The bill begins with several findings related to the balance of federalism and administration of federal elections, including that the U.S. Congress holds a secondary role in elections and that federal election legislation should not impose unfunded mandates on state and local elections. The bill specifically asserts that states have the primary role in administering elections and enacting legislation to set the time, place and manner of elections.

Given these findings, the bill would make several reforms to election administration at the state level. While some of the reforms would be adopted by the state on a voluntary basis, the adoption of others would be incentivized through the availability of full federal funding. Specifically, the bill would:

If enacted, the bill would require the federal government to undertake the following actions related to election security and cybersecurity:

H.R. 8528 would mandate several reforms to the administration of elections for public office in the District of Columbia (D.C.). The requirements are similar to the federal election recommendations within the bill for states to adopt on a voluntary basis or on the condition of availability of HAVA funds but would apply to elections for public office occurring in D.C., including for Federal office and any ballot initiative or referendum. In the case of federal elections, H.R. 8528 would mandate D.C. to: