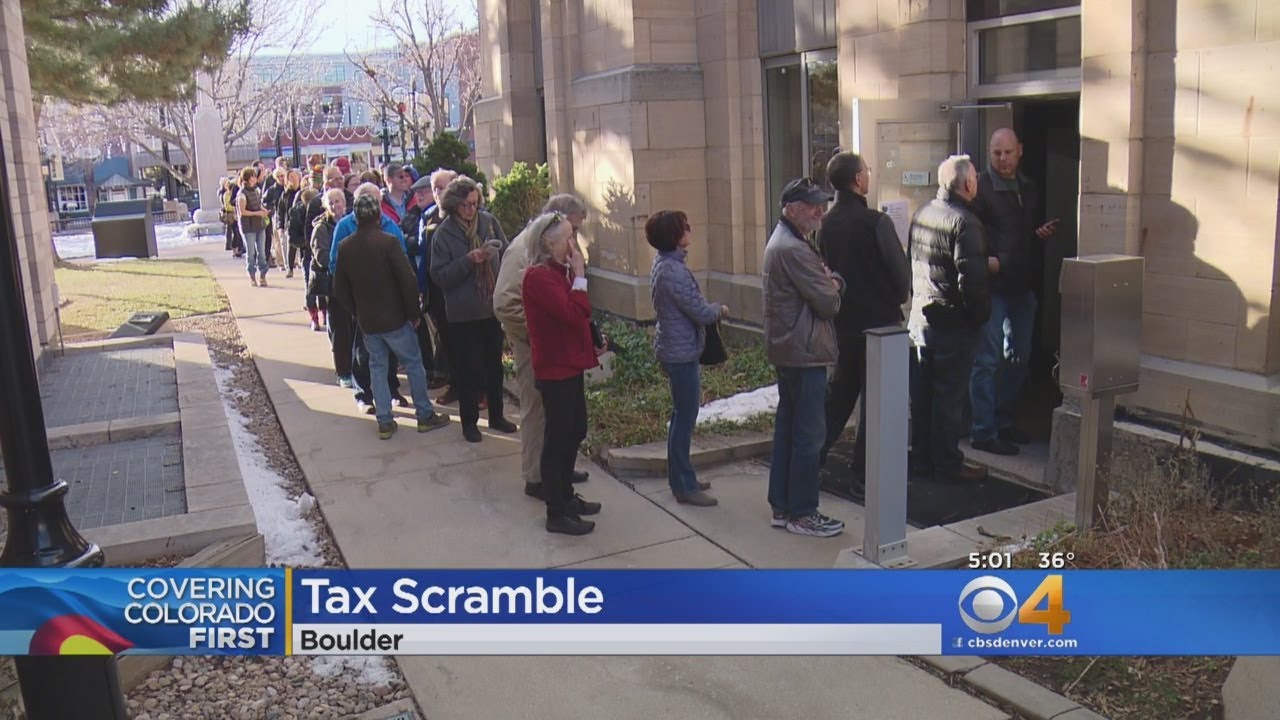 The line to prepay 2018 property taxes before the end of 2017 stretches well outside of the Boulder County, Colo. courthouse. Photo courtesy of CBS4 Denver.

County tax collectors' offices in several states spent December processing early payments from homeowners trying to get in under the wire, before the $10,000 state and local property tax deduction cap kicked in

As the year wound down, a lot of staff members in county tax collectors’ office figured the last weeks of December 2017 seemed ripe to use their vacation time.

How wrong they were.

Passage of the federal tax code overhaul meant homeowners’ state and local property tax deduction would be capped at $10,000 starting in 2018. Keying on that last part, thousands of people looked into whether they could pre-pay their property taxes before the new year, in hopes of getting in under the wire. And they showed up in long lines at tax offices across the country, eager, for a change, to pay their taxes.

In Boulder County, Colo. that meant 3,800 people coming to pay in less than a month, and the county’s collecting $32 million.

“We usually spend the last week doing what a lot of offices do, eating leftovers and doing house cleaning,” said Treasurer Paul Weissmann. “Instead we wound up working 16-hour days and coming in on New Year’s weekend to process everything. I don’t think anyone was ready for that.

“The line out the door was an hour long. People were waiting that long on the phone. Things got better when the assessor’s office staff pitched in to help.”

Weissmann said the usual pre-paid haul in Boulder County is less than 1 percent of properties.They expect a jump to 5 percent after the mailed payments are processed.

Then the Internal Revenue Service chimed in Dec. 27, saying prepayments would only be eligible for the upcapped deduction if the properties were already assessed and billed for 2018. That meant the 13,000 or so residents of Fairfax County, Va. who had already paid $93 million would end up having to pay more for their tax bills in the end. The Montgomery County, Md. Council fast-tracked a bill to allow prepayments, but the IRS ruling scuttled those plans.

Tarrant County, Texas had never allowed prepayments. Attempts to do so registered as an overpayment of the prior year’s taxes in Assessor-Collector Ron Wright’s computer system.

“When we found out about the deduction cap, we developed a workaround to be able to accept the prepayments,” Wright said. “We told the public we would make no judgment of what the IRS would do, but we would accept them, and we considered the payments a good-faith effort to pay their taxes early.”

After the IRS ruling, Wright said the system was changed again to process refunds.

“In Texas, everything is valued as of Jan. 1, so we couldn’t accept the prepayments,” Wright said. “We tried, though.”

Pennsylvania taxpayers were mostly out of luck, save for four counties on the western end of the state that had different collection systems. Lawrence, Beaver, Washington and Allegheny counties saw some late-year traffic in their treasurers’ offices.

Cook County, Ill. was not surprised by the rush, though.

“We started hearing rumblings in early December,” said Treasurer Maria Pappas. “We got 200 emails and 300 phone calls in a day, people asking if they could prepay.”

Pappas directed a team of 20 programmers to put together an online pre-payment tax bill, which was available starting Dec. 11.

“We used to have 258 people working in six offices, now we’re down to 70 in one office,” she said. “We had to have something set up online, otherwise we never would have managed.”

She said the success with the county’s prepayment was the fruit of 20 years’ worth of computerization efforts.

“We had 80,000 people debit their bank accounts, another 10,000 pay with credit cards, all online,” she said. “People still came into the office, though. I was handing out baklava and Eli’s cheesecake on New Year’s Eve.”

“I tended bar for 23 years, and that week was the closest environment in the treasurer’s office that compared,” he said.

Fitting, then, that it was the week of New Year’s Eve.