Road-weary commissioner travels to 2018 Annual Conference on a budget 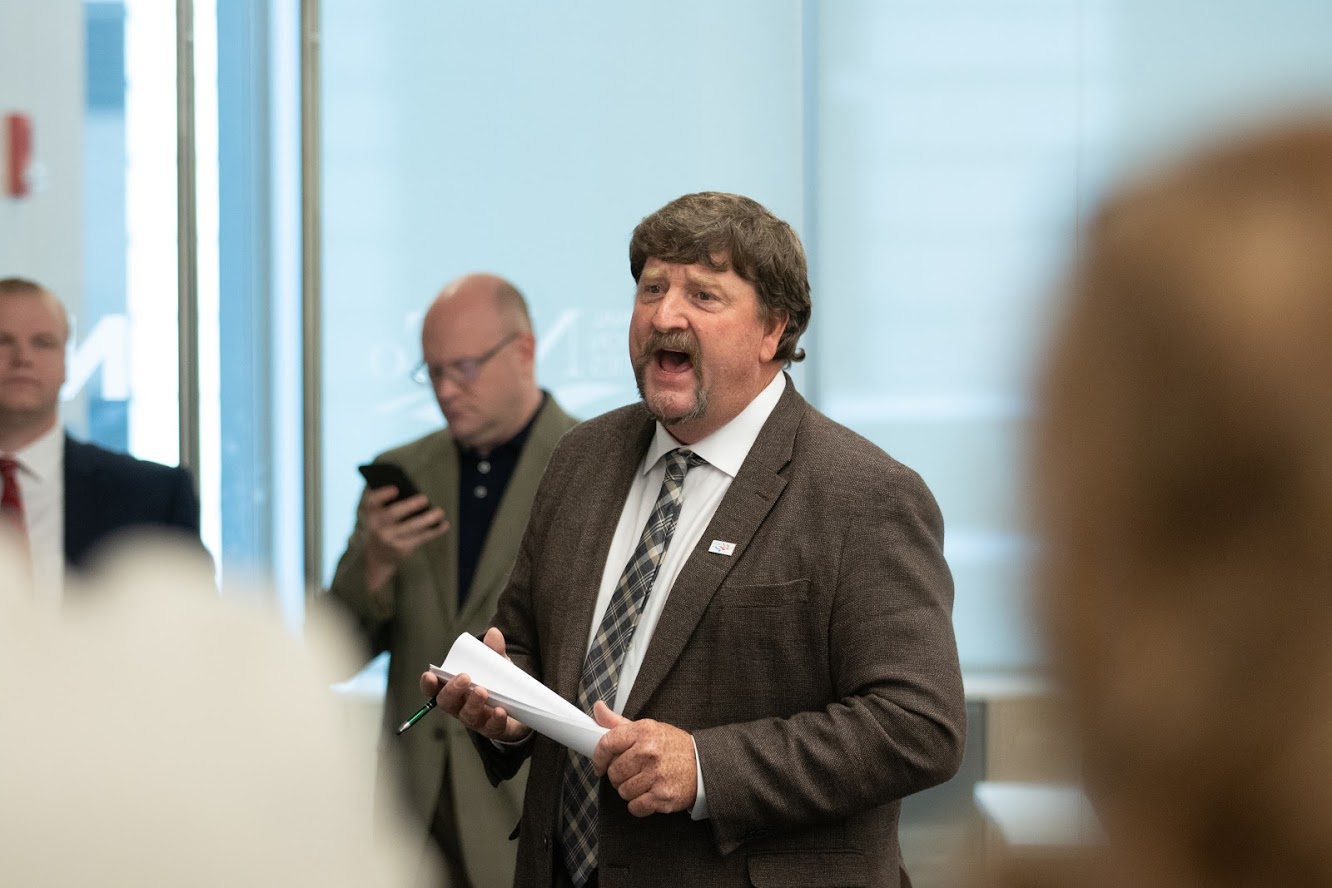 In order to filter by the "in queue" property, you need to add the Entityqueue: Queue relationship.
Jim Doherty took a bus more than 2,000 miles to the 2018 NACo Annual Conference in Nashville, seeing a good chunk of the country along the way

I was beginning to feel grounded, the rocking of the rhythm of the rails finally ebbing from my cross-country train ride to Washington, D.C.  I had not fully absorbed the principles, nor the practical application of the County Leadership Institute, so I was a bit surprised when an email arrived from NACo, urging me to attend the 2018 Annual Conference and assist the first-time attendees as an ambassador.

I had to ask myself, could I make a difference?  Could I deliver a value to Oregon and more importantly Morrow County on a national level?

I thought of my friend and mentor, state Sen. Bill Hansell, who was involved with NACo for 32 years, serving as president in 2005-2006. He left his mark and delivered services to Oregon and our neighboring county, Umatilla.

My fellow commissioners graciously offered to cover my local responsibilities for the week, so I was fast running out of excuses.

The die cast on my trip, I shifted my focus and began watching Timothy Ward’s travel tip channel. If I was going to make this voyage to NACo’s Annual Conference, I was going to save as much money on this venture to Nashville as I could. That meant booking a seat and boarding the Greyhound bus! Along with saving hundreds of dollars, I surmised that no “artist” was discovered flying into Music City on a 747. Country songs are replete with the romantic notion of a busker, guitar on his back, strolling off the Greyhound bus and into our hearts.

With a modicum of trepidation, I watched “How to Survive a Cross-Country Greyhound Trip.” Ward told viewers to sit as close as possible to the driver, don’t sleep and don’t venture into the restrooms on the bus or in the terminals. And for heaven’s sake, do not speak or make eye contact with these gypsies, tramps and thieves.

Eager and undaunted, I stood at the front of the line at 2 a.m., in Stanfield, Ore. With riders already on the bus from Portland, I was still able to commandeer a survivable location, two seats back of the first of many callous conductors. These drivers left little doubt who was in charge. I learned quickly they played fast and loose with rules regarding requisite stops. They had little sympathy for those gripped by nicotine or commissioners in dire need of walking some kinks out. If they found a spot for a break, we had 15 minutes but it was best to be back in 10.

Some 10 hours into the trip, my angst was giving way to ennui and a wish that I had funded a flight.

With Twin Falls, Idaho shimmering in the distance, the big diesel engine commenced to knocking, then ceased to drone, and 50 passengers and the driver gave out a collective groan. We rolled to a stop on the shoulder… no engine, no air, and no less than 100 degrees out there. Shouts of murder, mayhem and muted panic ensued over the next three hours as we waited for a mechanic.

I’m no Ron Carlson, but I was able to convince our driver, that given the amount of oil and water soaking into the sand, his dog was dead. He made a call, and announced, “They are sending another bus out of Boise.” Its hour-and-a-half ETA caused a scene that made the driver wish for a riot.

The travel guru had not prepared me for this! Only a dozen pizzas, delivered on the side of the road, quelled the uprising. Our shift in perspective as we sat in the meager shade consuming Canadian bacon, was just short of biblical.

Any thoughts of catching connecting buses was out the window, so I rolled into Nashville 61 hours later and a mere 15 minutes before my ambassador training. An hour into the meeting, I noticed that my fellow ambassadors were a little off-standish. I wasn’t sure why until I realized I was in the same clothes that I had put on 2,166.9 miles before.

Those clothes ended up in a dumpster out in the back of a Cracker Barrel in Nashville.

The conference started off with a bang. I was at the first-time attendee breakfast meeting wearing my ambassador badge. I had 20 first-time attendees under my tutelage out of a record 570. I’d scarce begun my delivery when one of the newbies noted my own first-time attendee lanyard. This, in short, became the message: I and they alike could wade forth and do our level best, we need not shirk in the shadows. This seemed to resonate as I watched my cohort routinely enter the fray throughout the week. With 3,000 seasoned statesmen and women in attendance, having your voice heard necessitated some moxie.

From morning till night, I tried to make a difference — from Ag and Rural Affairs, Health and Human Services, Public Lands and Public Safety to fighting for Veterans Choice initiatives. Near to my heart were meetings on the intrinsic knowledge that without arts and culture, we have no foundation. When and where it behooved us, I joined in the call to move federal legislation. When ill-conceived ideas reared their heads, I pushed back. When I was unsure about the proper stance, I listened and hoped to ask my constituents who were more affected.

It was not “all work and no play.” Disappointed that my talents were not “discovered” on the road, I joined 17 other Oregon delegates at the Grand Ole Opry show.

There and back again

With my head filled with knowledge and advice from commissioners from across the country, I began my return westward. This time, it would be different. By now, a seasoned traveler, I was first in line. I fixed my blinders and settled into the first seat. The bus filled quickly, and we waited a few minutes while the terminal staff convinced a young gal that this was indeed the bus she and her four-year-old son needed to board. As she came up the steps, I realized that there were no side by side seats left. If she was to sit by her son, someone was going to have to move. I reluctantly resigned my position and eased down the aisle looking for a vacant seat. There remained only two single seats and both were at the very back. One was next to a hard-eyed, hollow-looking young fellow. The other next to a very distraught, very pregnant young lady curled in the fetal position and sobbing incessantly. I slid in next to the young man and attempted to introduce myself; this was met with no acknowledgement of my existence.

By the time we stopped for dinner beneath the golden arches, I had taken inventory of those, including my seatmate, who lacked the means for a meal. There were a handful that looked wistfully toward those downing a Big Mac. Other times, they survived on the sustenance of a bummed cigarette.

Determined to start anew, she bought a one-way ticket to Portland. I gave her my dear friend Commissioner Sonya Fischer’s number in Clackamas County.

The other gal that became an absolute project was the young non-English speaking mother. The one that had taken over my prime front-row seat. Whether we were refueling and had re-boarding passes or changing buses in Denver, Salt Lake or Boise, she always managed to get in the wrong line. As we were departing Salt Lake City, I noticed her, steps away from entering the bus bound for Los Angeles. I shouted across the concourse, “Señora, tú autobus es este” or “Lady, your bus is this one,” at least I hope that’s what I said. As she fought back upstream toward our location, Greyhound staff at first sought to dissuade her. When the rest of the Portland-bound patrons joined in, they, quite surprised at our unity, led her to the front of our line. We couldn’t understand her, nor could she understand us, but by God, she was part of our gang.

Midway through Day Three, we cut through the Blue Mountains. Almost home. I began to think about how I would answer the inevitable question, “Was it worth it, did you make a difference?”

As we approached the exit at Stanfield, the driver came over the intercom, announced that despite being on time, it would be the briefest of stops, only long enough for one passenger to depart. Everyone else was to remain seated.

The vision of Kelly, my wife, sitting on the back of the ranch truck was a welcoming sight. Not one for goodbyes, I bounded off the bus on the driver’s heels. I grabbed my luggage and slung it up next to my wife as I hugged her.

She turned me around to a humbling sight: No less than a half dozen vagabonds had risked being left behind and came off the bus to say goodbye. My seatmate quietly extended his hand and introduced himself, followed by the pregnant gal, who for the first time, was dry-eyed and well fed. Last in line was the young mother who kissed the St. Christopher medallion around her neck and offered a simple, “gracias.” A perfect bunch of misfits.

I hope the driver waited. I like to think he did. I couldn’t bring myself to look back.

I think I made a difference. I think we all can make a difference, if only in giving a hand-up, if not a hand-out, to those nearest us on this journey.