PILT is no four-letter word for counties 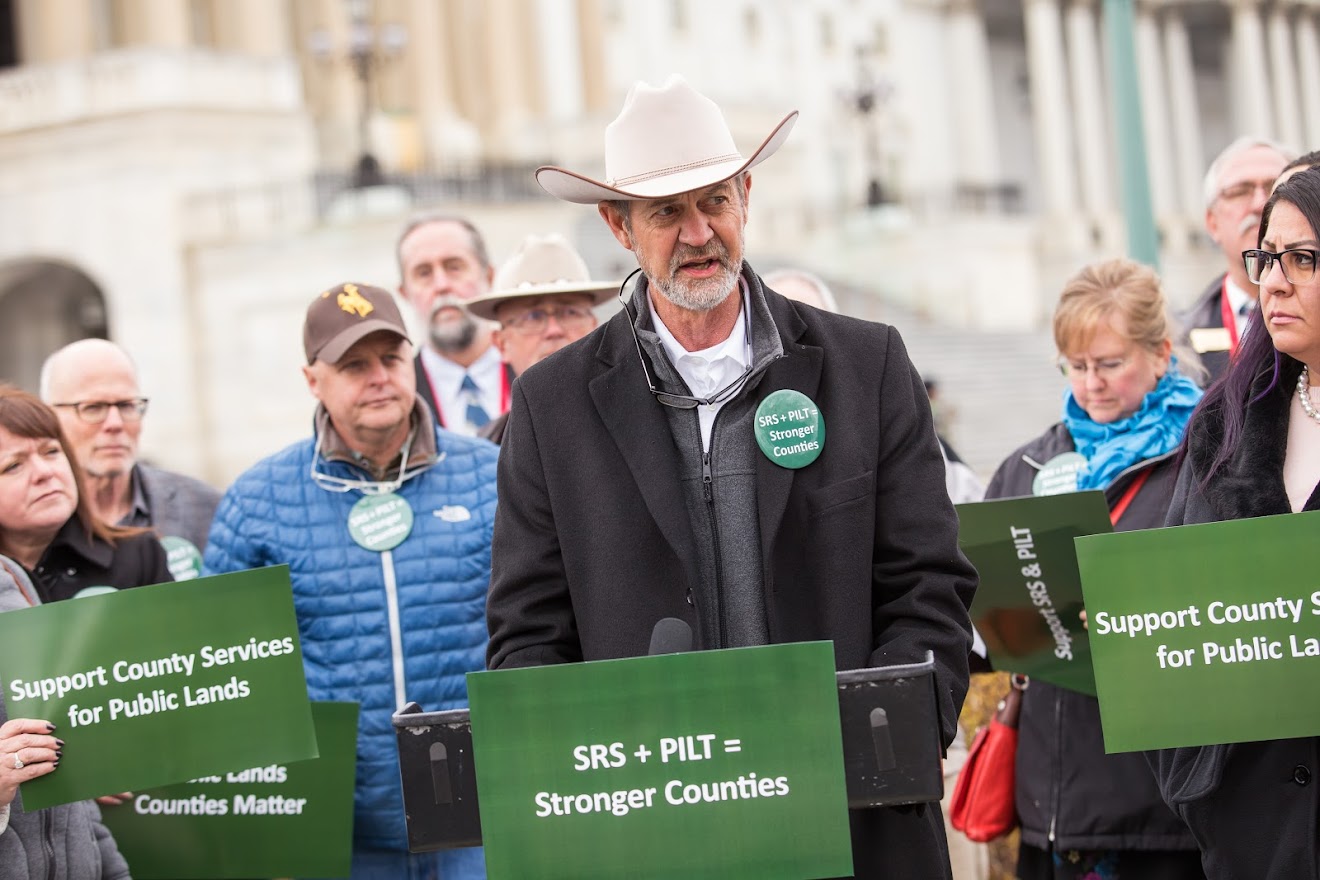 Prairie County, Mont. Commissioner Todd Devlin speaks at the 2018 Capitol Hill rally in support of the Payments in Lieu of Taxes program. Photo by Jason Dixon

With his steady demeanor and a career backed up with plenty of research, Todd Devlin doesn’t come across many surprises. But he found one in a NACo Public Lands Steering Committee meeting.

As he spoke, a hand went up in the back of the room.

It wasn’t a rhetorical question, or a heckle, but the man, who chaired NACo’s Federal Land Payments Subcommittee, couldn’t have asked a better person to explain the Payments in Lieu of Taxes program.

“That’s when I realized it was an educational issue, that we have continuing turnover with commissioners all the time,” Devlin said. “Nobody should be expected to understand that – how it all works. You’d have to be half crazy.”

Devlin has been for decades, even before taking office as a Prairie County, Mont. commissioner in 1995, among the most storied minds in public land funding policy, leading the charge for a more equitable funding for rural counties.

But that committee meeting question typified Devlin’s fight to bring the funding inequities to the audience that can make the difference, an audience outside of wonks like himself, illustrating an ongoing concern for hundreds of counties that deal with the Bureau of Land Management, U.S. Forest Service, Bureau of Reclamation and more.

What exactly is PILT?

Since 1977, PILT has compensated county governments for at a fraction of what they would otherwise glean from property taxes on land the federal government owns or manages. It helps fund services that counties provide to those lands, including road building and maintenance, emergency services, law enforcement and search and rescue operations.

That was the culmination of a process that started with President Kennedy’s desire for a wilderness bill in 1963 to formalize the protection of federal land. In the face of overwhelming bipartisan, bicameral support for the legislation, House Natural Resources Committee Chairman Wayne Aspinall (D-Colo.) set the establishment of the Public Land Law Review Commission as a condition for allowing the Wilderness Act to come up for a committee vote. With $4 million in funding, the commission’s five-year study produced 137 recommendations on how to manage federal lands in a report titled “One Third of Our Nation’s Land.”

Among the recommendations: “Payments in lieu of taxes should be made to state governments, but such payments should not attempt to provide full equivalency with payments that would be received if the property was in private ownership. A public benefits discount of at least 10 percent but not more than 40 percent should be applied to payments made by the government in order to give recognition to the intangible benefits that some public lands provide, while, at the same time, recognizing the continuing burdens imposed on state and local governments through the increased use of public lands. The payments to states should be conditioned on distribution to those local units of government where the federal lands are located, subject to criteria and formulae established by the states.”

A county’s PILT payment is a combination of its federally owned acreage, population, payments from the prior year’s federal revenue-sharing programs (such as the Secure Rural Schools program that supports roads and schools in national forest counties), facets of individual state laws and the consumer price index. A county receives the higher of two alternatives, illustrated in the accompanying chart and adjusted for 2017 payments levels.

As cattle and sheep ranchers, Devlin and his family had been BLM grazing land permittees for years. In the early 1990s, he was appointed to create Prairie County’s first land use plan. In the process, he saw a disparity with a neighboring county’s payments.

“I couldn’t understand why we’re getting 7.5 times less than identical real estate across the border,” he said.

Essentially told to put up or shut up when he brought that detail to one of his commissioners, Devlin ran for an open seat, and won. He went to the Montana Association of Counties and tried to whip up support for congressional action to change the PILT formula to a flat rate for Montana counties.

It was quickly tabled.

“I confused everybody in the room, but it was a good rookie experience,” Devlin said. “I might have lost them because I got too deep into it, but I started to outline the importance of PILT to some of these larger counties.”

Prairie County doesn’t boast a big attraction, like a national park, national monument or national forest eating up its tax base. It has a wilderness study area and two grazing pastures, but it also has a checkerboard of homestead lands that reverted to federal ownership. It also never relied too much on what is now a $176,000 PILT payment “because it was so minimal,” Devlin said, relative to the county’s budget. “But I looked at the counties that got 30 percent of their budget from PILT. If I was in their shoes, and I was relying on that payment year after year, I wouldn’t want to change it.”

Even if the payment is minimal, it’s still Prairie County’s responsibility to maintain roads that serve both taxpayers and non-taxpayers or send search and rescue teams if someone is lost in the Terry Badlands. And the federal government, whether there’s a lot of people or a lot of land, is on the hook for those payments.

Devlin realized his role wasn’t so much a catalyst to crusade for PILT reform as it was to be an educator.

“If the situation is inequitable, the crowd will understand it.”

Once in a while, he’ll get a reminder that they don’t, like from the county official who didn’t know what PILT was.

From its first payment until 1994, PILT funding remained level at $100 million nationwide.  Congress amended the payment to adjust for inflation and starting in 1995, added a 220-percent accelerated increase in per-acre payments plus an increase in payment caps that matched changes in the consumer price index.

“At the time, the PILT formula was discussed, the very rural counties weren’t at the table because they couldn’t afford to be there,” Devlin said, pointing to not only the cost of travel to lobby in Washington, D.C., but the responsibilities county officials had back home in rural communities.

“If you work the CPI (consumer price index) backwards to 1976, you will find that Congress had done their homework and 75 cents in 1976 was very close to average tax equivalency,” Devlin said.

But the formulas didn’t make sense to Devlin.

“Congress did not opt to prorate the payment per acre because of concern of losing support from senators and congressional districts in the East because they almost always had far less acres of federal lands,” he said.

Devlin developed a unifying formula, based on what he learned from a 20,000-cell spreadsheet he crafted over the years to analyze PILT payments, that would adjust payment formulas to allow every county to receive at least half of its maximum PILT payment.

“Under that proposal, every county in the nation got an increase of at least 1 cent and it all fit in the amount appropriated that year,” he said. “In other words, there were no losers.”

While the Federal Land Payment Subcommittee passed it, the Public Lands Committee tabled it at the 2008 NACo Legislative Conference. The next day, during a visit to then-Senate Majority Leader Harry Reid’s (D-Nev.) office, Reid’s senior policy advisor Neil Kornze (later the BLM director in the latter years of the Obama administration), told county officials to not let a day go by when NACo did not come to them with an alternative PILT formula, because they had the money.

“We had tabled that proposal the day before and NACo, with no formal position, supported an alternative formula,” Devlin said.

Counties received two PILT payments in 2008 through the stimulus during the financial crisis, the first of five years of mandatory funding, which was extended though the 2014 farm bill.

The current full funding of PILT totals $529.6 million under the current omnibus spending bill, but counties are seeking PILT to be cemented as a mandatory program, which would make budgeting more predictable.

Seeking a formula for prosperity

Devlin remains concerned about the future of the formula for two main reasons. It lumps together counties with populations of 5,000 and under, and the fate of the Secure Rural Schools funding program may leave some counties at a disadvantage.

The population range is a problem because it includes 321 counties, and there’s a great amount of variability in that range of very rural counties.

“When Congress looks at this, they look at it from 10,000 feet,” Devlin said. “Then they say, ‘Well geez, we’re giving you guys such and such an acre, if there’s a lot of counties getting a significant amount…the average looks pretty good.’ The small counties, because of the population caps, gives the impression that it’s OK.”

The fate of the Secure Rural Schools program is an issue because if it ends, some counties will be better off, because they will no longer have their SRS payments deducted from their PILT payment, while others could see their PILT payments decrease as SRS counties would be eligible for a larger share of the PILT pie.

“In my county’s case, why should I support SRS when the money that would replace it could be used for any governmental purpose, give me a lot more flexibility,” he said.

“Some counties would benefit from SRS going away and others would suffer.”

He was encouraged by Sen. Steve Daines’ (R-Mont.) Small County PILT Parity Act in the last Congress, which would have increased the maximum PILT payment for counties with a population below 4,500, though the bill did not make it past the Energy and Natural Resources Committee.

The challenge is taking an esoteric topic to a wider audience, winning support from the population center in the East that has little-to-no familiarity with public lands funding.

Devlin proposes starting by educating additional NACo steering committees, explaining how policies on Western lands could have consequences for Eastern counties, with hopes of building a broader coalition.

“It’s political. It’s dollars that are such a huge part of federal land counties budgets that trying to make fair or equitable across the board very well might take more money,” he noted.

As for where to go, he looks for opportunities to put the issue in proper context, which can be challenging, given its complexity.

“Testimony in front of Congress would help, but five minutes isn’t long enough.”