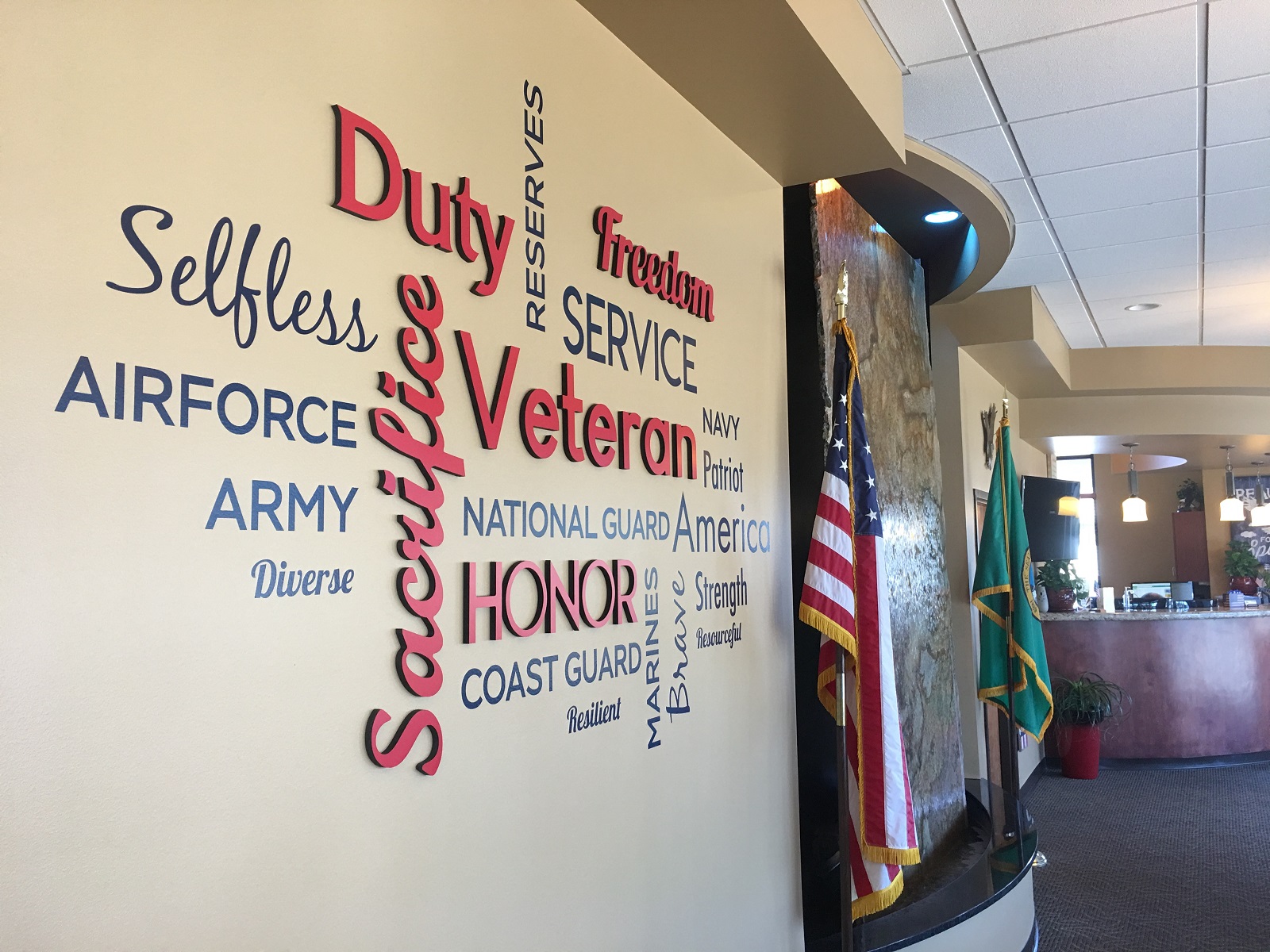 The function and design of its building create a welcoming atmosphere for a veterans service center in Spokane County, Wash. Photo by Gary Lott

The Cascade Mountains lie between Olympia and thousands of veterans in eastern Washington. Despite the physical separation, Spokane County is showing the region’s veterans that they’re not forgotten just because the state government is far away.

“I think Washington state has really done a lot in regard to engaging it with counties and creating opportunities for county veteran services officers,” said Cathrene “Cat” Nichols, director of the Spokane County and Eastern Washington Regional Veterans Services Center.

“The Veterans Benefits Administration is a really hard system to navigate for our veterans, and Spokane County has just taken on the role of being that advocate for veterans,” she said. “It has impacted every other aspect of the quality of life for the veterans that we serve.”

Soon after leaving state government to work for Spokane County in 2017, Nichols directed the first-ever state and county co-located regional veteran services office, which opened in 2019.

The function and the aesthetics were designed to be welcoming not only to Spokane County’s 44,000 veterans, but another 25,000 from surrounding counties, including some across the border in Idaho.

“It was tailor-made to honor veterans,” Nichols said. “We incorporated very patriotic artwork; we used very welcoming paint color tones. We have a beautiful water wall that creates a beautiful, serene environment for them.”

The center includes space for job assistance counseling, with computers and Wi-Fi. And once they’re in the building, Nichols said, the CVSOs can address overall issues.

The center employs local veterans and makes use of regional resources.

“They speak the language, they have the military cultural competency to really understand where that veteran is coming from,” Nichols said. “You can’t rebut their argument of survivor’s guilt or whatever unless you know what that is. And so, I think a lot of times it’s just a matter of outreach and education. It was an uphill battle getting our Vietnam-era veterans to understand that they are to be honored for their service. Because that was the last thing they were when they came home from Vietnam.”

Nichols and her staff create a culture of positivity and honor around military service, making it easier to overcome those stigmas and making it a safe environment to self-identify as a veteran to begin with.

Creating a sense of belonging and community far away from the rest of the state’s resources is important to Nichols.

The shift in Spokane County’s operations has widened the table from what had essentially been a triage operation for years.

When Nichols took the job, almost half of the county veterans service office’s $1.2 million budget was going to food and gas vouchers, which, while needed, weren’t “moving the needle” on veteran homelessness, she said.

Nichols has worked to remake a system that had been working piecemeal on issues facing veterans into something more systematic by building staff capacity. Those efforts have already paid off with more than $9 million in Veterans Administration awards.

“We took people who are working in veteran services, working with the veterans’ relief fund and providing emergency financial assistance, and we cross-trained all of those folks and got them accredited through the state Department of Veterans’ Affairs as veteran service officers,” Nichols said. “Whenever somebody came in with — it might be an urgent case where a tree fell on their car, and they can’t get to work, and they need some emergency financial assistance.

“We have been able to change the entire nature of veteran services.”

That means developing long-term strategies for each veteran, rather than triaging their crises when they happen.

“It’s connecting a veteran to the benefits that they’ve already earned. It increases their income, it increases their health benefits, it increases all different types of programs and services that can help them have a positive transition from military service into the civilian sector.”

The complexities of the VA system can frustrate, if not infuriate, laymen, causing many claims to be rejected on technicalities.

“Veterans just shoot a claim in there thinking ‘OK, I hurt my knee in the service, I’m going to apply for a service-connected disability for my knee,” Nichols said.

“Well, because they didn’t word it right or they didn’t use the right codes when it comes to diagnosis, there’s just so many pieces that the veteran could get wrong. Actually, even just using an outdated form, an outdated VA form, can get the claim denied just right out the gate. If they have to go through the appeals process, that could take five-to-seven years.”

Nichols’ said her staff’s successes are shared by the veterans and the local community.

“They’re getting a VA claims award so they’re buying homes, they’re buying cars,” Nichols said. “All of the county sales tax, all of that federal funding coming into the community, it’s just another huge return on investment for the county leaders. So, I think that we’ve been able to kind of show the proof in the pudding there, that it’s a win-win for everybody. It’s a win-win for county government because we’re able to have a sustainable model that’s working. I feel at some point we’re going to work ourselves out of a job but win-win. If we do that, then ‘bonus,’ in my mind.”

Spokane County welcomes veterans from surrounding counties, and even nearby Idaho, but Nichols is creating a consortium with all of the county veteran service officers in eastern Washington to give them the same training Spokane County’s CVSOs receive.

“We’re serving all of our surrounding counties in eastern Washington and Spokane,” she noted. “But we’re also encouraging and educating those counties like Stevens County and Whitman County, for example. “It’s been a conglomerate effect of quality veteran services, but also embracing the county veteran services officer model.”