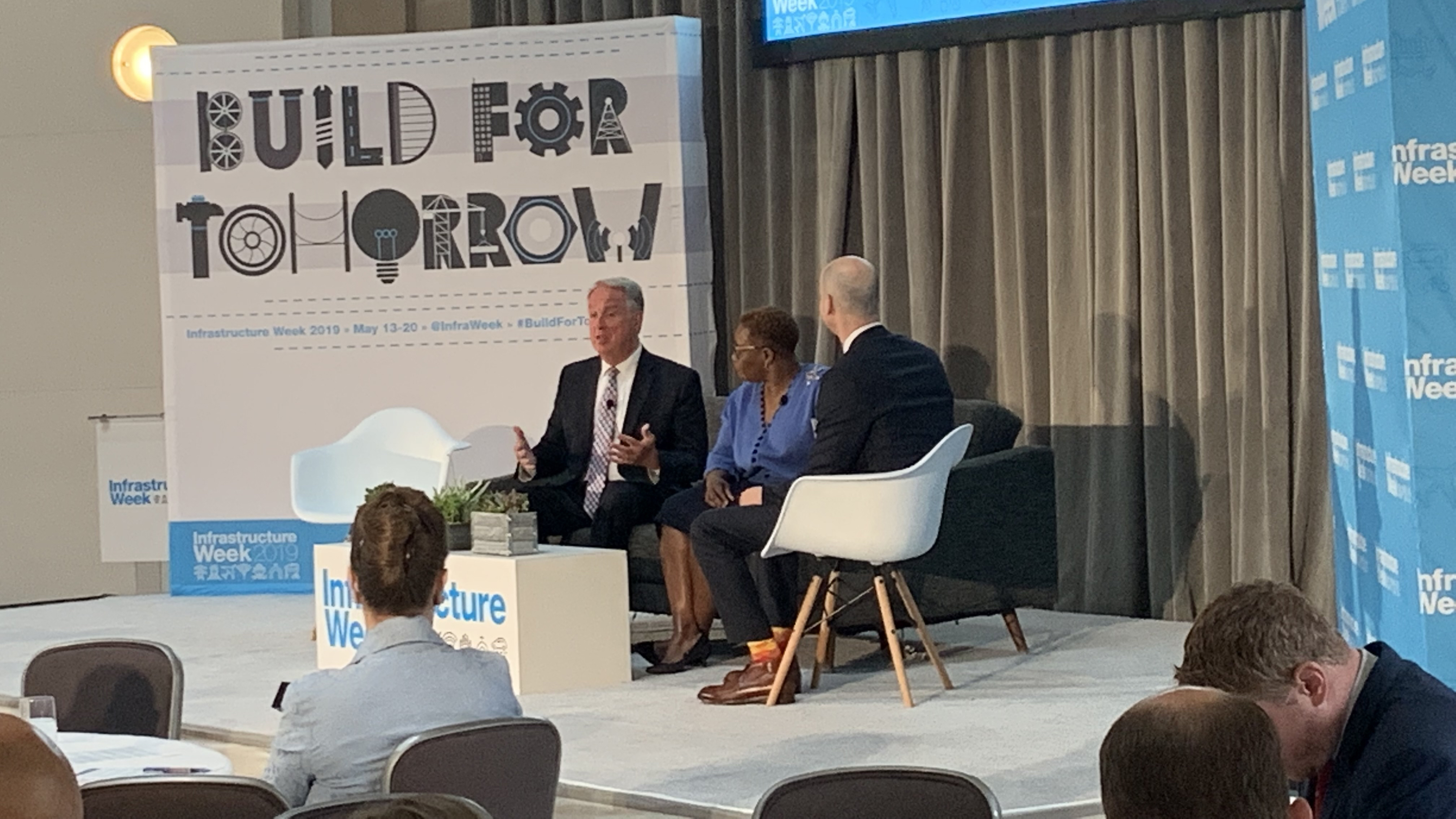 In order to filter by the "in queue" property, you need to add the Entityqueue: Queue relationship.
"Counties and cities need to work together on a regional basis to address infrastructure deficiencies"

The current and future state of infrastructure across the country was front and center Monday morning in Washington, D.C., where NACo and others kicked off Infrastructure Week 2019.

Judge-Executive Gary Moore of Boone County, Ky. and NACo Second Vice President, reminded the audience that more than three-fourths of the nation’s transit systems are owned by counties. “It’s a huge demand on our budget and that demand is competing with the other things that counties do,” he said. Moore participated in a panel discussion dubbed “Where the Rubber Meets the Road: Leadership from America’s Cities and Counties,” which highlighted the role of cities and counties when it comes to innovative infrastructure.

Moore added that cities and counties need to work together on a regional basis and emphasized how private-public partnerships help invest in infrastructure.

“We have to continue to think outside the box with partnerships, public-private, and those other investments that may help us to be able to accomplish this because we know that public funding is scarce,” he said.

Karen Freeman-Wislon, mayor of Gary, Ind., and president of the National League of Cities, said for counties, “necessity is the mother of innovation.”

She explained that when there’s a need, such as inequities in terms of access to broadband in local school systems, local officials want to do something about it to provide the best service to residents.

“Lack of connectivity has an adverse impact whether you’re in rural America or urban America, where the connectivity just doesn’t exist consistently,” she said.

Moore discussed NACo’s TestIT App, which can be used to test the speed of broadband in different areas.

“We’re being innovative because we have to,” he said.

“We have to understand that infrastructure truly is a root of many issues,” said Scott, who spoke on the “Infrastructure: Building Opportunity, Breaking Down Barriers” panel. He shared his thoughts on infrastructure, explaining that it is not only the foundation for economic development, but for mobility and livability.

The president of the American Federation of Teachers, Randy Weingarten, who also spoke on the panel, said she believes infrastructure creates middle-class jobs, fills the needs of community members and creates a sense of dignity and safety about the future.

As a former teacher, she added that infrastructure impacts school systems by affecting their water, sanitary conditions and safety conditions.

“Infrastructure by its nature has the capacity to unleash all of its forces and the might of our economy, our capital, our people to serve a much higher purpose,” he said.

Steve Demetrious, chair and CEO of Jacobs Engineering and a member of the Business Roundtable Infrastructure Committee, highlighted the “Delivering for America-Infrastructure Driving America’s Economy” report.

“In the case of American infrastructure, we need to take action now,” he said. “We must get America back in the business of investing in efficient, modern and productive infrastructure.”

In a panel titled “Upgrading America’s Infrastructure for the 21st Century,” business leaders discussed the future of infrastructure.

CEO of Siemens USA Barbara Humpton said that the country is at the front end of bringing digitization to infrastructure.

Jason Andringa, president and CEO of Vermeer Industries, said he foresees the ability to monitor how infrastructure is aging and then performing proper maintenance as a common occurrence in the future.

Robert Puentes, president and CEO of Eno Center for Transportation, noted that he believes the country does a good job building new things, but does not do a good job maintaining it.

“We’re already starting to move away from the ribbon-cutting as being the coolest thing and recognizing that there’s technological upgrades, there’s way to integrate things, so the conversation on infrastructure is changing,” Puentes said.

An ‘urgency to act’

Later in the afternoon, speakers discussed ways to find a bipartisan path for a national infrastructure agenda at the “United by Infrastructure: Business, Labor & the Urgency to Act” fireside chat.

Neil Bradley, executive vice president and chief policy officer at the U.S. Chamber of Commerce and Sean McGarvey, president of North America’s Building Trade Unions, said they are working together to create an atmosphere that makes action possible by policymakers.

“Once you begin building momentum, I’m confident that we can find ways to finance airports, finance water systems, finance railroads in a way that everyone can come together and agree,” Bradley said.

McGarvey added that the country needs a massive infusion by the federal government to lead the way to work with partners, counties, states and cities to do a massive infrastructure build. State and local district councils and local unions are interconnected and have been more effective in moving policy makers and getting legislation done to provide resources to invest in infrastructure, he said.

He told attendees that the American Society of Civil Engineers rated American infrastructure at a D+.

“It won’t be great if we do not have at worst an A- on infrastructure over the next 25 years,” he said.

For the United States to be competitive in this century and in a competitive global economy, the country needs to invest $4.5 trillion, according to Hoyer.

Hoyer went to the White House with House Speaker Nancy Pelosi (D-Calif.) and other House leaders to talk to President Trump about a bipartisan investment for infrastructure. After the meeting, both parties agreed on a $2 trillion infrastructure deal.

“Investment in infrastructure will yield benefits in the near term and perhaps more importantly, in the long term,” Hoyer said.

Hoyer said attendees at Monday’s kickoff event have the ability to spread the word about the importance of infrastructure.

“I urge you to use your platforms… to continue sending the message that infrastructure is the key to a stronger economic future for America,” he said.