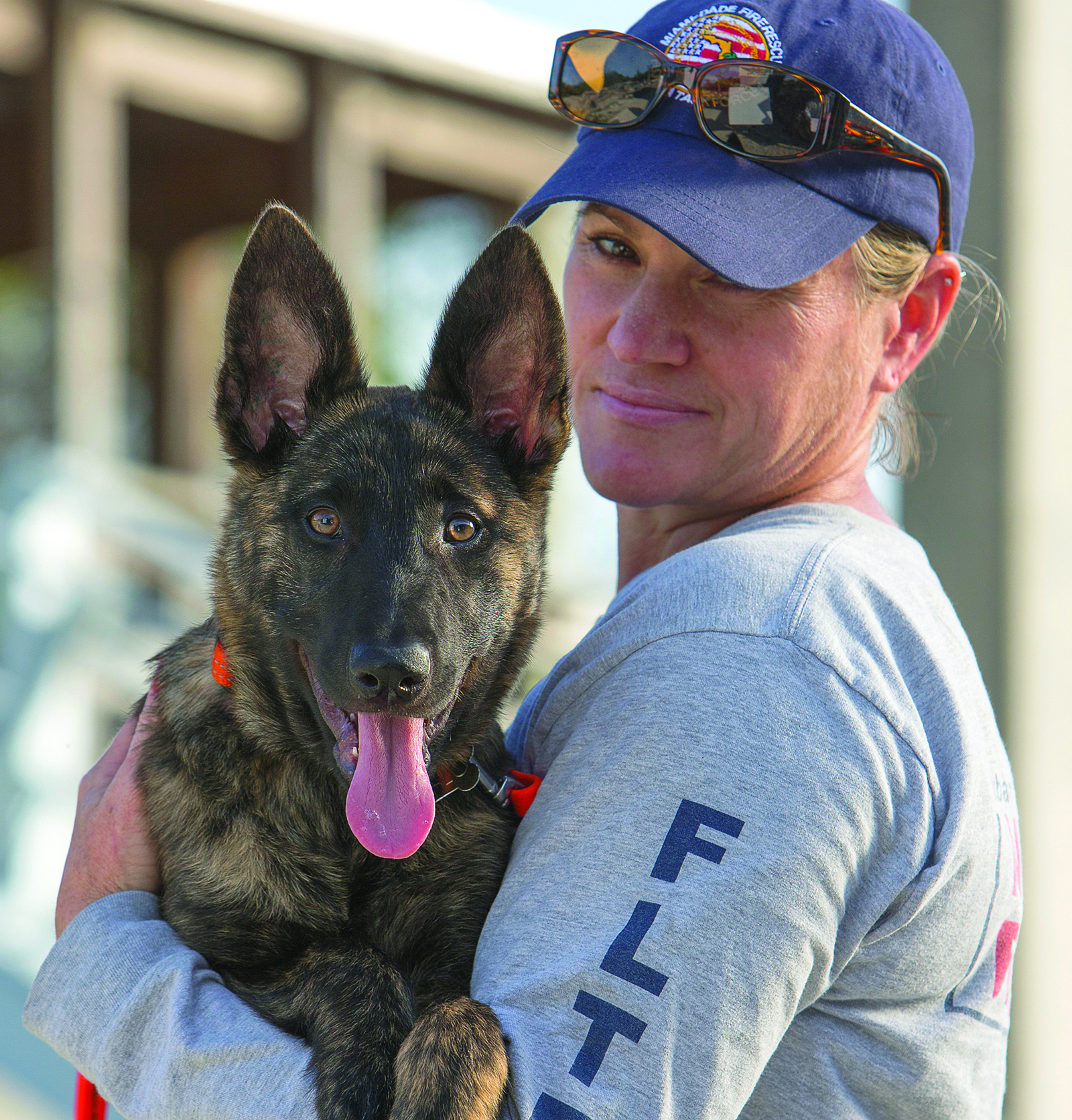 Capt. “Cat” Labrada pauses for a photo with Halo, her search and rescue dog.

In order to filter by the "in queue" property, you need to add the Entityqueue: Queue relationship.
A rescue dog trained for Miami-Dade County Fire's Florida Task Force 1 disaster response team plays a big part in an IMAX movie in theaters nationwide.

Constant barking signals that someone is alive under the rubble. Whether it’s the earthquake devastation in 2010 in Haiti, the Florida panhandle after hurricanes in 2018 or a parking garage collapse in Miami, Florida Task Force 1 has been there, searching for survivors, with rescue dogs leading the way.

Now, one of those dogs is getting her star turn in an IMAX movie Superpower Dogs, playing primarily in museums nationwide. Halo, a 4-year-old Dutch Shepherd is one of four dogs featured in the 45-minute film. She works with Florida Task Force 1 (which is one of 28 FEMA-certified urban search and rescue units), sponsored by the Miami-Dade County Fire Department.

Watch the trailer for Superpower Dogs

The film chronicles the nearly three years that Capt. “Cat” Labrada spent preparing Halo to be certified as a search and rescue dog. Labrada is the training coordinator for the task force. And though Halo has not yet been deployed to a disaster, the film aims to chronicle the hard work and training that go into preparing dogs for this task.

“Sometimes you’ll have a dog go a whole lifetime without deploying and that’s just the name of the game.”

Labrada has spent nearly 20 years with the task force, after working as a trainer at Orlando’s Sea World. She moved back home to Miami, took a job at a veterinary clinic and adopted a Yellow Lab that she intended to train for dog shows until she met a woman at the clinic with a search and rescue shirt. A few questions later and Labrada was on her way to an open enrollment for the fire department and that Yellow Lab had a career change to public safety.

Florida Task Force 1 handlers choose, buy and train their own dogs, and Halo is Labrada’s fourth, but her first Dutch Shepherd.

“They are all about work,” she said of Dutch Shepherds like Halo. “They are motivated by work, they have to be doing something. They don’t have an off switch.”

That’s a contrast to the work-hard, play-hard personality of a Yellow Lab. Labrada made that transition after the early loss of her third Yellow Lab.

After a few months, she felt the itch to train another dog, around the time filmmaker Daniel Ferguson was looking to chronicle the training process for Superhero Dogs.

Set up with Labrada, he brought his filming crew to Michigan where Labrada met puppy Halo, who makes an appearance in the film’s trailer, and it was a match made on the silver screen.

“I was nervous and it was stressful,” Labrada said, underselling the difficulties of training a new breed of dog on camera.

“You have this deadline, but you also have the support. I think they got lucky, finding me, because of the team that I represent. It’s a very big organized team, but the dogs have good days and bad days the way we do.”

Training a search and rescue dog boils down to regimented play and building loyalty to “victims.”

“Positive reinforcement and consistency — over and over,” Labrada said.

Handlers take turns hiding and letting dogs find them, while ratcheting up the difficulty, adding noise and movement to force the dog to focus on scent.

“They need to understand fully to use their nose to do what all of their senses were doing to begin with,” she said. “They have to trust their nose. You need to teach your dog that getting to someone in a hole, under a pile is the best thing ever.”

Each time the trainer uses the search command, it’s the same work every time, the dog searching until it finds the person hiding. The dog then barks until the “victim” offers a toy — the dog’s reward for a job well done.

“In real life, obviously the victims can’t reward,” Labrada said, pointing out that as a result, the dog will bark until someone shows up to offer a reward.

A veteran of aquatic mammal training at Sea World, Labrada said the transition to canines was a little difficult because “you can’t just walk away from them, they can follow you,” but having the dog as a part of her family is an added benefit. Not that Halo hasn’t been a challenge.

“It was easy when it came time for Halo to work, but the obstacles I ran into were outside of the job,” she said. “Particularly socialization; she’s always on high alert and I needed to train her to learn it’s not always about the chase. She’s part of my family, she has to be able to be home when my son has his friends over.” Her progress has impressed Labrada.

“A few years ago I didn’t think it would be possible that she would be able to maintain her composure with a bunch of little dogs and children around.” The process takes roughly one year, if a dog is mature. FEMA doesn’t certify dogs younger than 18 months. A search and rescue dog typically works for 10 years.

Halo and her breed can be workaholics, so part of being a good handler is being able to manage a dog’s workload.

“You have to be your dog’s advocate, you can’t let your dog overheat,” Labrada said. “Hurricanes don’t happen in the winter, so we’re all dealing with heat and stress levels. We all watch over each other’s dogs.”

Florida Task Force 1 has a complement of nine live-search dogs and three cadaver dogs. They do not search for evidence in police investigations. The dogs work on half-hour shifts, punctuated by water breaks and rest.

“We train them for endurance, but they are athletes and you just have to watch them,” Labrada said.

The stress can build up, and dogs telegraph emotion. Florida Task Force 1 found 11 people over six days, which meant a lot of days, the dogs were going home without a “save.” The team would take them back to base and do training, allowing them to find people and feel some success. “It’s a mental thing for them too,” Labrada said. “They get depressed and you can see it and they don’t work as well.”

Labrada likes the finished film, and marvels how Ferguson condensed three years into 45 minutes. She said the film accurately depicts the work she and the task force members do, though the film’s brevity can be misleading.

“It doesn’t show how much time it really takes to train a dog really well, it  might give a false idea that it’s not as grueling as it is,” Labrada said.

“It’s years of blood and sweat and hiding in dark places, all for the dogs. That’s the biggest part of this, it’s not standing up there with a leash watching your dog do the dirty work.”