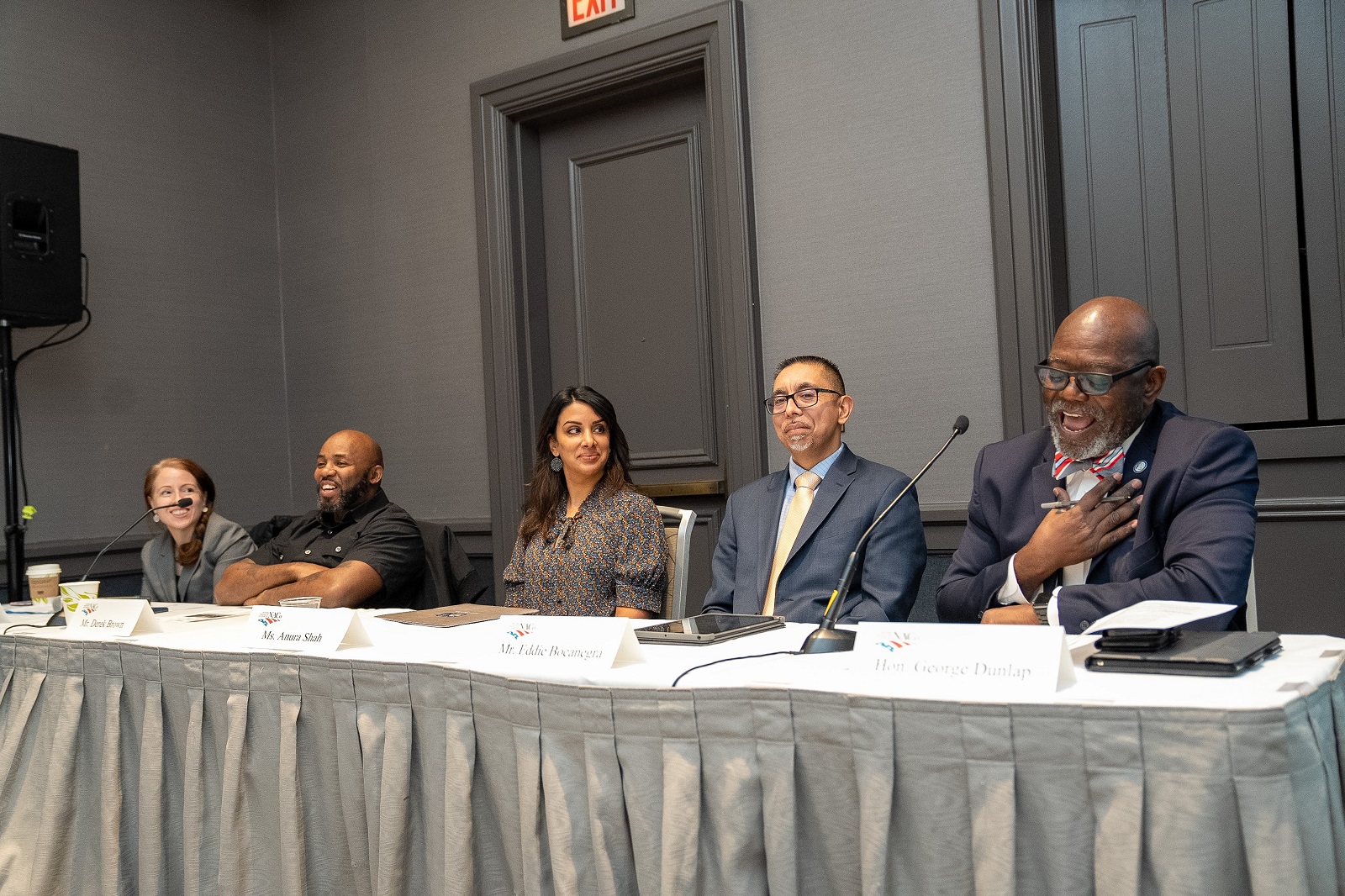 Community violence intervention experts discussed strategies to reduce gun violence at the county level last week at NACo’s Large Urban County Caucus symposium in Illinois, emphasizing the need for grassroots movements that engage those identified as high-risk and provide support to those impacted by community violence.

Bocanegra grew up in the West Side of Chicago in an area he refers to as “the 60623.” He belonged to a local street gang in his youth, which led to him serving 14 years in prison for shooting and killing a rival gang member in retaliation for a shooting that paralyzed a member of his gang.

Through his personal experience and time spent at the DOJ, Bocanegra has found that there’s often a disconnect between recommended community violence intervention policies and what actually takes place in a community, he said.

“In theory, things sound amazing, but the way they look in practice, particularly with communities and organizations on the ground that have been grossly underinvested to really provide adequate efforts of support services for its communities, and for its particular population –– where do we start with that?” Bocanegra said. “You have communities, like North Lawndale, still recovering from the civil rights movement back in the 1960s.

“These are communities deeply affected by gun violence –– the lesson in regard to my previous work is that we have an opportunity to really take some of the best science, some of the best models out there and to really think about, how do we support these organizations, these individuals, leaders, including government, to really be able to scale their services to continue to research their programs and to do it in such a way that really braids federal dollars in their local efforts as well?”

The disconnect that Bocanegra identified led to him developing and launching READI (Rapid Employment and Development Initiative) Chicago, an anti-violence outreach program that targets high-risk men in Chicago’s South and West sides and offers them job and educational training, as well as cognitive behavior therapy.

In June, President Biden signed into law the country’s most significant gun reform bill in decades, and in September, the Justice Department announced it would grant $100 million toward reducing community violence. Bocanegra acknowledged these are great steps, but more still needs to be done, he said.

“One hundred million dollars when you spread it across 50 states –– it’s not a lot,” Bocanegra said. “But it’s a good start, to think about, what is the kind of evidence that we need to have to convince Congress that the populations that we’re talking about today are worth the investment?”

Shah also discussed a disconnect in theory and practice, pointing to advocacy groups like Every Town, Giffords and Sandy Hook Promise and universities well-known for their CVI research, like Johns Hopkins and Washington University in St. Louis, while highlighting how there’s not enough locally focused efforts, like county support groups for those impacted by gun violence.

“They work on studies, they do important work, but many of these organizations are also focused on changing legislation and policy advocacy work versus actual boots on the ground victim-support services, so we have to think about it from that perspective,” she said.

She urged county officials to put resources into not only fostering a sense of community around CVI, but to also provide support for the financial and physical ramifications of gun violence, like assisting with applications for victim’s compensation funds, Social Security disability and home modification grants.

“Where can someone go in your county when they just need someone to talk to? … Where can they go if they need a case manager with expertise in something like forensic social work to help them navigate the myriad of supports that they will need for a lifetime?” Shah said. “Things like transportation to follow up with medical appointments, where can they go for this? Especially if they are newly wheelchair-bound, their life is going to be dramatically different.

“And above all else, what about mental health services like therapy, like counseling, specifically geared toward gun violence and violence prevention? Just think about it for a second in your county –– where do those individuals go? Is there a one stop shop for this?”

Shah’s long-term recommendation is for counties to create crisis clinics, she said.

“We need to establish an actual brick and mortar [location] that can serve as a central point of contact for support and resource pathway in a formalized way, which means funded,” she said. “…We need a central entity that’s going to take this issue on –– we cannot leave this up to the victims. We cannot leave this up to their families. And we can’t piecemeal this either –– it’s just too important and too big.

“It crosses too many lines of our social systems here to leave this up to a fragmented system, so it can be the start of your formalized method of delivering these prevention and recovery services.”

Boxing Out Negativity is an example of a grassroots organization that has found success in Cook County, Ill. The youth boxing program on the West Side of Chicago was created by Derek Brown, who was born and raised in the area. He joined a gang in his teens, which led to him going to prison at the age of 17.

Since 2009, Brown has devoted his life to youth outreach in the hopes that he can prevent others from having similar experiences to his own, starting Boxing Out Negativity and funding the program in its early years himself so that local youth could participate free of charge. Since then, the initiative has received funding from organizations like the Illinois Criminal Justice Information Authority and The Chicago Fund for Safe and Peaceful Communities.

The organization goes beyond boxing, offering meditation circles, bringing in local mental health experts and hosting other events, like Bike Out Negativity and Street Love Rides.

“It’s a true community within a community taking a holistic approach to supporting physical, mental and spiritual wellness in a family-like environment, centered on positivity,” Globokar said. “Coaches can have an incredible impact on individuals’ lives, but people are complex and it moves beyond sport.

“It’s one thing to build a connection with a kid building proper technique, but to truly take the time to step back and have meaningful conversations and to have shared experiences and shared meals and outings and all those things just builds an entirely different level of connection and influence.”

Brown shared one of the organization’s success stories and said he thinks initiatives like Boxing Out Negativity are the way to help fight a national issue on the local level.

“This one kid was recently shot, he was highly gang-involved,” Brown said. “He didn't come to us right after he got released, but it was about three months later –– at that time he was using PCP, drugs, all of the above and he got jumped in the streets. He came to Boxing Out Negativity with the intentions of enhancing his fighting skills…but what he learned was in order to learn how to box you have to become your greatest self.

“…The man that we’re speaking about is now an employee of ours, he’s a coach. This is the model that we can just put all over –– if somebody like Derek Brown can do it, anybody can.”