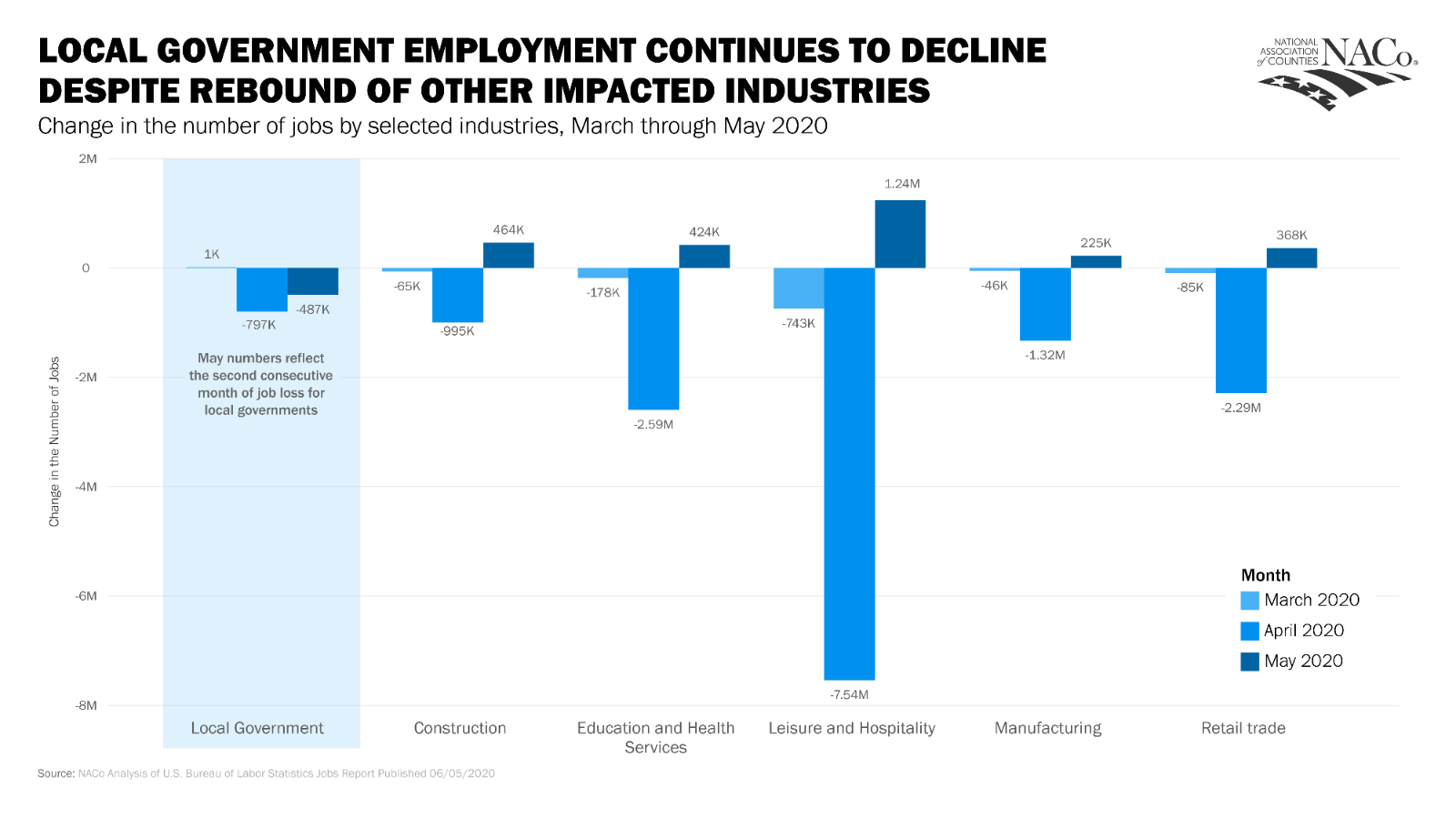 Much of the decline in local government employment occurred in education systems, with nearly 310,000 education-related jobs lost to local governments in May. However, another 177,000 jobs were non-education jobs such as healthcare practitioners, social workers, law enforcement officers, maintenance crews and construction workers. Overall, since March, local governments experienced a decline of more than 523,000 non-education jobs. Individuals in these jobs are directly responsible for providing essential services and resources to counties, many of which are amid the ongoing public health crisis, subsequent economic hardship and civil unrest.

Check out the full May jobs report from BLS here

The continued hardship of county and city governments prevails at a time when other industries are seeing a historic reversal: overall, the unemployment rate decreased to 13.3 percent and 2.5 million jobs were gained across industries, surpassing the previous record of monthly jobs gained in a single month from 1983.

The COVID-19 pandemic and efforts to mitigate its spread impacted every sector of the labor market, causing a devastating loss of more than 20 million jobs and an unemployment rate of 14.7 percent — the highest rate since the Great Depression — a month earlier. Counties are facing unprecedented challenges and economic strain from efforts to alleviate the spread of the pandemic — such as business closures and stay-at-home orders — including a $114 billion loss of revenue and an estimated $30 billion in COVID-19 related response costs through the end of FY2021. As counties wrestle with financial realities, many are forced to furlough workers, pause nonessential capital projects and rework depleted budgets while continuing essential services to residents. So far, the National Association of Counties (NACo) has tracked 120 counties which have been forced to furlough or lay off a share of the county workforce due to COVID-19 budget impacts, though many more counties are expected to have enacted similar measures.

Despite the economic impacts of the COVID-19 pandemic, recovery is on track for several industries. Local government, however, is not yet one of those industries, as illustrated by its continued decline in employment. Employment increased substantially in May for some of the hardest-hit industries such as leisure and hospitality, construction, education and health services, retail trade and manufacturing industries. At the issuance of the BLS jobs survey, 23 states had initiated reopening and the Paycheck Protection Program (PPP) funds had been distributed. The increased business activity paired with federal funding for small business paychecks stimulated job growth in these industries.

The leisure and hospitality industry rebounded with an increase of 1.2 million jobs — over half of the jobs gained in the economy — and the industry's unemployment rate dropped to 35.9 percent.

Employment in the construction and manufacturing industries increased by 464,000 and 225,000 jobs, respectively, while healthcare increased by 312,000. Retail trade employment increased by 368,000 jobs following a decline of 2.3 million in April. The recovery across industries signals good news as revenue streams for counties will begin to grind back to life; unfortunately, this upturn will likely not cover losses sustained in recent months. 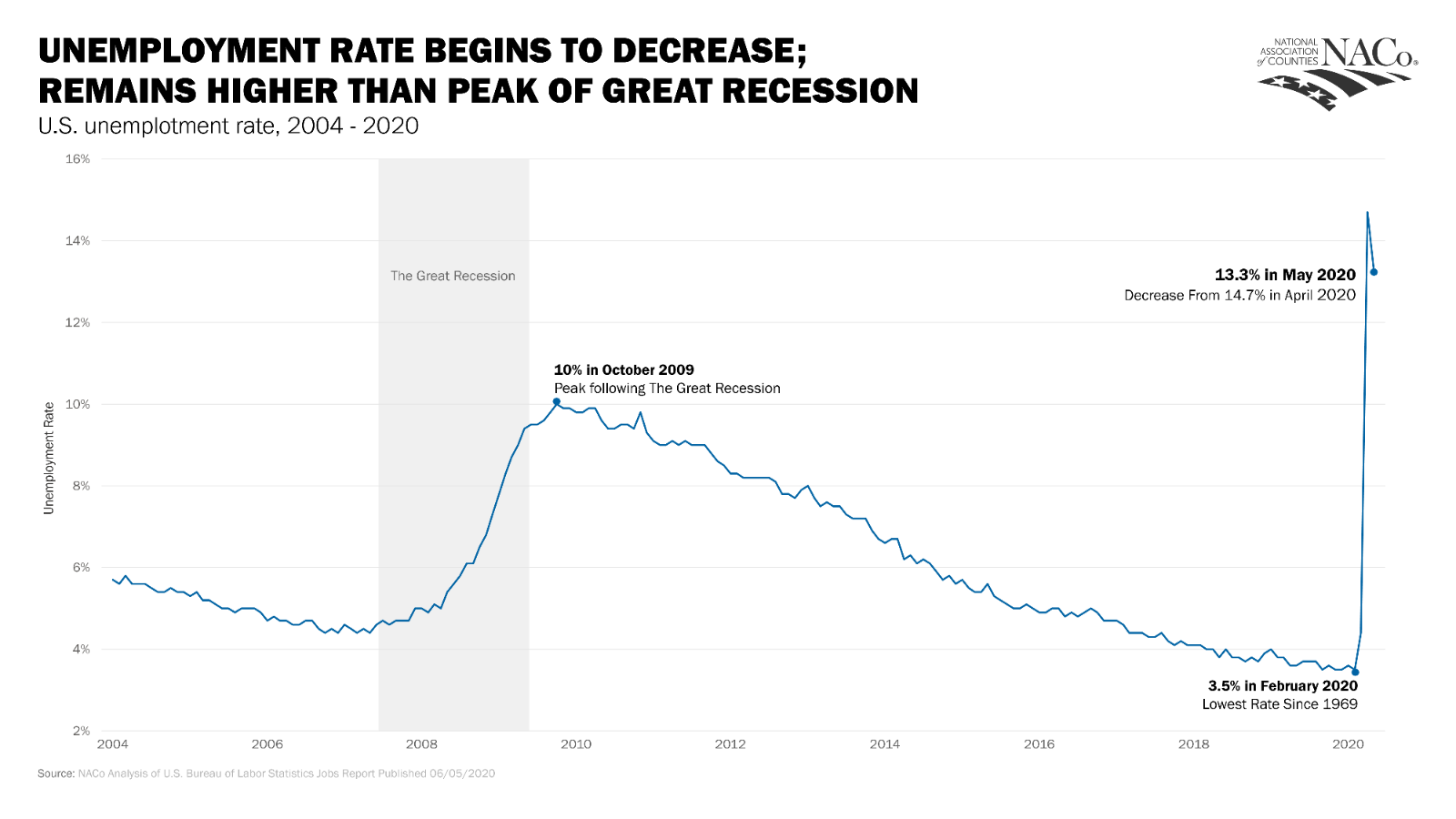 Overall, unemployment rates for minority workers remain higher than the national rate. The unemployment rate for Hispanic workers dropped to 17.6 percent in May, while it remained at 16.8 percent for African American workers.

Following a dramatic increase of 16.2 million in April, according to BLS data, the number of people on temporary layoffs fell by 2.7 million to 15.3 million in May. However, BLS reported that misclassification errors impacted the labor force measures. During the pandemic, 4.9 million workers were misclassified as "employed but not at work" instead of "unemployed on temporary layoff." Thus, the April unemployment rate would have been higher at 19.2 percent as opposed to 14.7 percent, and the unemployment rate in May would be 16.1 percent as opposed to 13.3 percent. Nevertheless, the overall trend remains unchanged.

Although the latest jobs report presents a national economy on the road to recovery, county governments are still reeling from the economic strain created by the pandemic. Counties are on the frontline of the COVID-19 response and have lost significant revenue because of efforts to contain the pandemic. The continued decline in local government employment reflects the ongoing manifestation of those impacts at the local government level. Faced with major budget shortfalls, counties continue to work towards balancing support for the adversely affected members of the community and facilitating the reopening of local economies with reduced county staff levels. 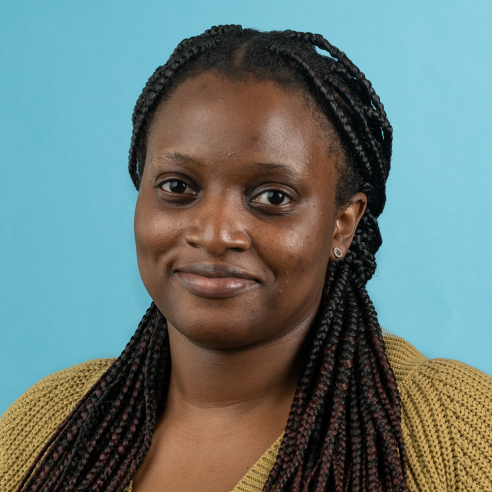 Stacy is NACo's senior analyst for research and data analytics in the Counties Futures Lab. She is responsible for leading research projects (including scoping, data collection, analysis and writing) and acting as the primary analyst for the County Explorer briefs that translate key CE data points for NACo audiences.