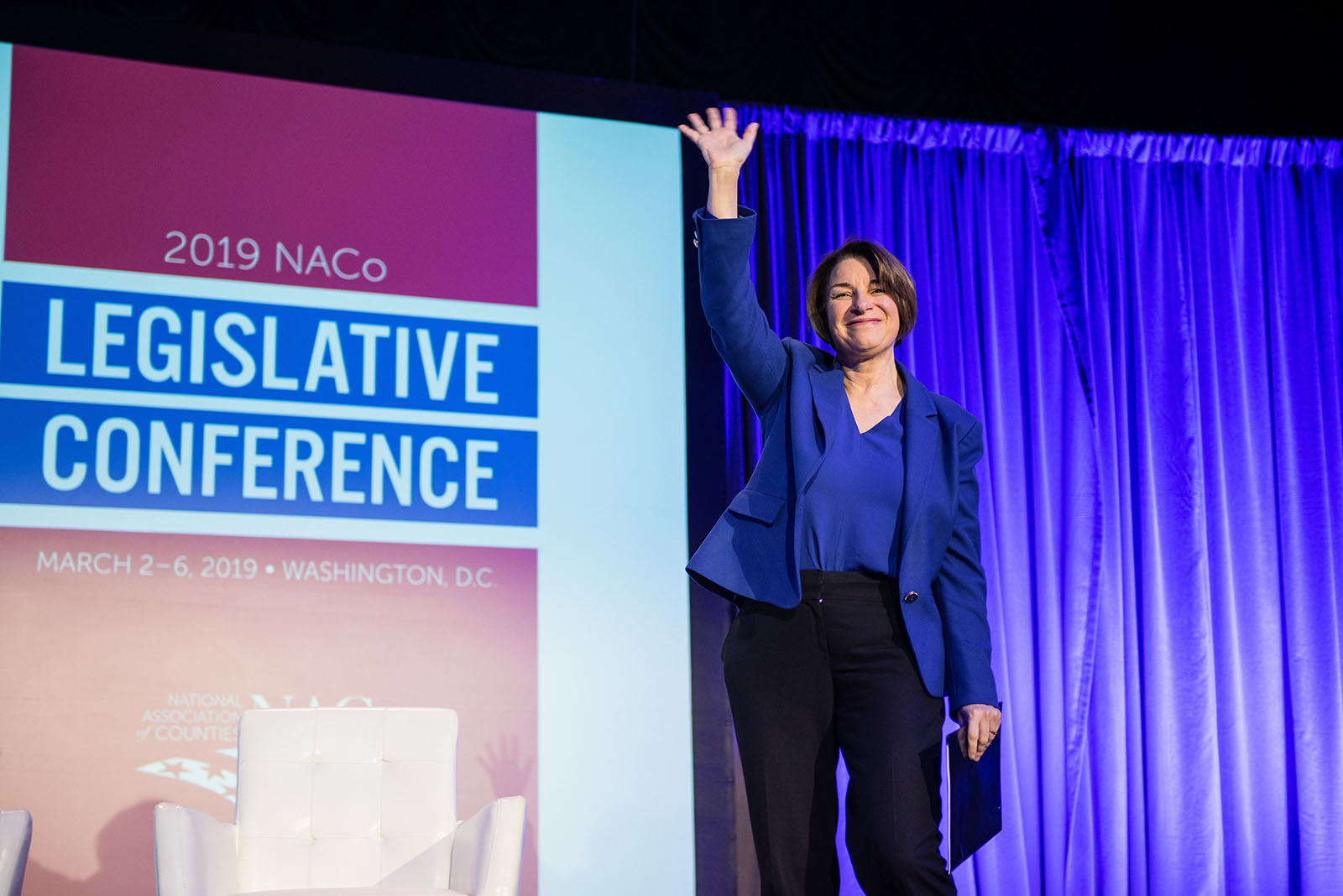 In order to filter by the "in queue" property, you need to add the Entityqueue: Queue relationship.
Sen. Amy Klobuchar, a former Hennepin County attorney, announced her bid for the presidency weeks before speaking at NACo's Legislative Conference

Minnesota Sen. Amy Klobuchar, a former county attorney, told a NACo audience March 5 that Congress and county officials “have our work cut out for us” when it comes to everything from criminal justice reform to infrastructure.

The former Hennepin County attorney told NACo members at the annual Legislative Conference that it was “probably the best job I ever had.”

Klobuchar, 58, is running for another job — she announced a run for the White House Feb. 10 on a snowy day in her hometown, joining a crowded field of Democrats running for president in 2020.

“We couldn’t have a more important time for local officials…with healthcare, infrastructure or dealing with criminal justice issues,” said Klobuchar, who mentioned she was recovering from a cold.

“It’s one of the reasons I get energized when I visit all of our 87 counties in Minnesota.”

What she hears when she’s visiting counties in Minnesota: The cost of their healthcare, infrastructure and workforce issues, she said.

“What it means is we should be governing from the heart, from opportunity and not from chaos,” she noted.

Klobuchar recounted a story about the Interstate-35 bridge, an eight-lane steel truss arch bridge, that fell across the Saint Anthony Falls of the Mississippi River.

“Last time I was here, I remember the story about the bridge coming down on a beautiful day in Minnesota,” she said. “A bridge shouldn’t fall down in the middle of America.”

The bigger story, she noted “was about community. When it collapsed, the entire world was focused on our town. People went in and out of that murky water to save lives.”

“A school bus plunged down 30 feet and the driver one by one got the kids off that bus,” she said. “That is community. I know you have seen it every single year in your own communities.”

“In the words of my friend John McCain, fight for a cause larger than ourselves,” she said.

“Locks and dams; rail, roads and bridges — we need to invest in infrastructure in this country,” she said. “I truly believe there’s a will to get it done and we need your help.”

Rural broadband, she noted, should be able to “get done” in the United States “by 2022.”

“If the whole country of Iceland is hooked up I think we can too” she said. “There’s no reason we should have a digital divide.”

Other areas that need work, she said include workforce training. “Counties have job openings and the workforce doesn’t match up,” she said. “We should be doing so much more with apprenticeships. Not everyone wants to needs a four-year degree.”

“My own dad started out with a two-year degree,” she said. “There are many paths for success and we need to design our education system to meet those needs.”

On another issue important to counties — immigration reform — the country needs to look at it “not just as a security issue,” she said. “We need workers in our factories and our fields. They are America.”

Costs in the form of pharmaceuticals and healthcare was another topic that Klobuchar mentioned in her address, specifically how to bring down those costs by stopping “big pharma” from “paying off generics to keep their products off the market.”

“We don’t have compeititon for so many drugs,” she noted. “Think about what we could do” if Medicare could negotiate prices, she added. “It’s also about the taxpayer burden.”

Challenges to counties, she said, continue to be the opioid epidemic and criminal justice reform. Government needs to change prescription practices and stop illegal drugs from coming out of places like China, she said.

Criminal justice reform is a challenge whether you’re in a rural or urban county,” she said.

“Part of our job is to build trust and talk about what we can do better. We have to have more accountability in our criminal justice system,” such as videotaping interrogations, she said.

Counties can also save money with shorter sentences and treatment for drug offenders, she added.

“I have an optimistic view of our country, I see people every day doing their jobs, like you. I’ve been there on the local level and I bring that every day to work.”

“We want to improve peoples’ lives and we need to put politics aside,” Klobuchar said.

“I cannot emphasize enough how important that is. So, thank you for being at that point in democracy. If we didn’t have you I think we’d be in a lot more trouble in this country.”