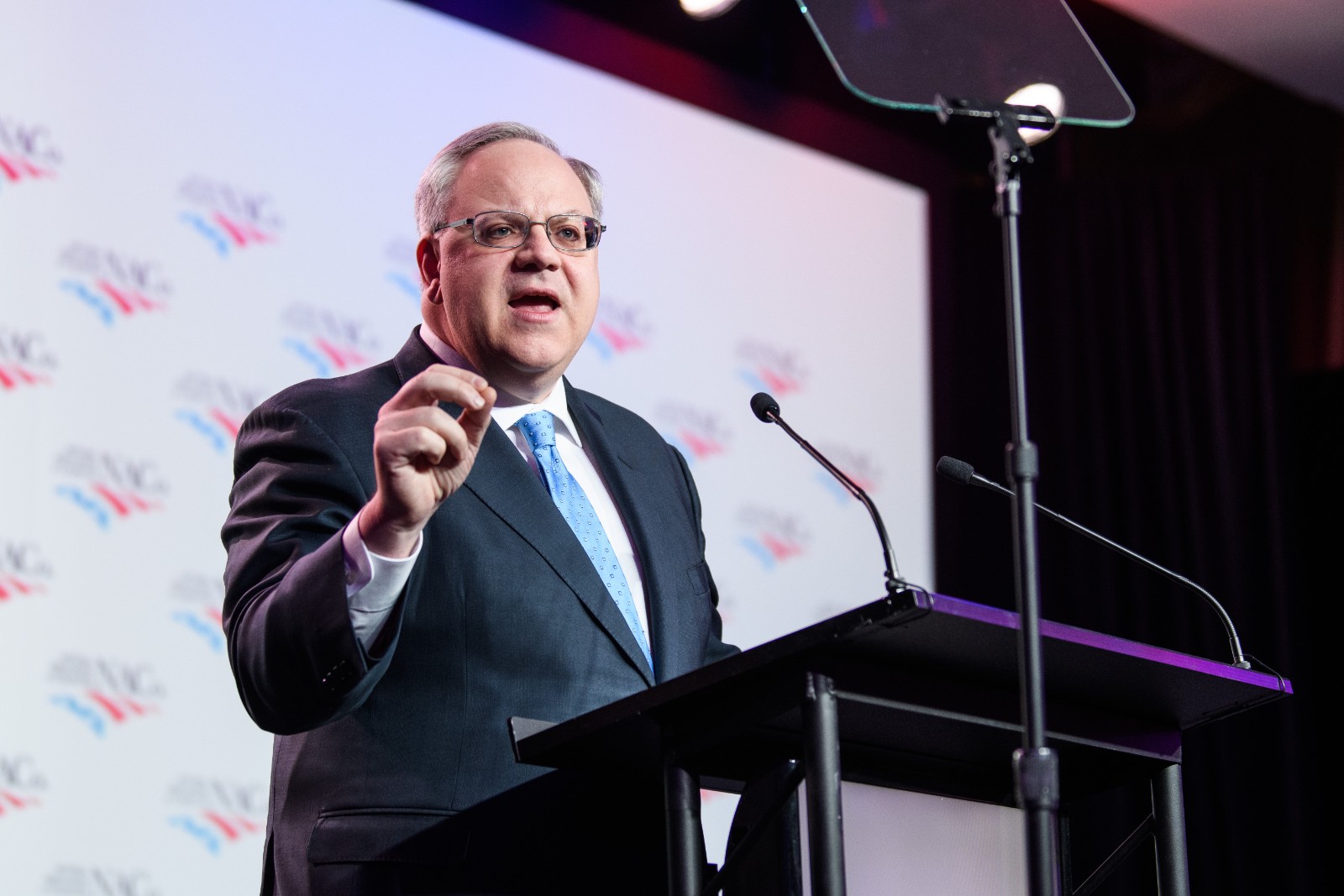 As long as he is Secretary of the Interior, David Bernhardt wants to bring county governments inside the department’s decision making processes.

That process, he told Monday’s opening General Session audience, involves due diligence, time and careful reflection of any issue brought to him, along with careful evaluation of the views of the issue’s stakeholders.

It’s personal for him.

“I grew up in a small rural community in western Colorado and was completely surrounded by federal lands,” he said. “And one of the things that I left home with was the knowledge of how consequential decisions Interior makes can be to communities.

“Our decisions at times can have a great impact on your economic hopes and dreams.”

In a conversation with County News, Bernhardt elaborated on several issues of interest to county governments,

“I think the president has given us very clear direction that he believes in more active management of our rangeland and forest to prevent catastrophic wildfire,” he said.

“No matter where you sit, it looks like fires are larger...fire season [is longer]. We should begin to think about how we manage the workforce.”

“That time can be used for fighting fires or working to prevent fires, primarily through active forest management or controlled burns,” he said. “I’m really optimistic that Congress will support this initiative.

“We’re going to be very aggressive in every state in looking at how we do veg (vegetation) management and maintaining fire breaks,” he said. “That’s a big priority of ours. It’s amazing what a fire break can do for controlling fire.”

The department is three years into a reorganization started by Bernhardt’s predecessor, Ryan Zinke.

The relocation of the Bureau of Land Management headquarters to Grand Junction, Colo. has received the most attention. While the agency’s core leadership staff will move to Colorado, other BLM staff will move to “centers of excellence” elsewhere in the West, “where their work will line up with that done within the state that they’re located in.”

Such moves will put BLM staff closer to land over which the agency has jurisdiction, virtually all of which is west of the Mississippi River. Bernhardt said the new BLM headquarters has a targeted opening date at the end of 2020.

The reorganization effort has already consolidated 49 previous DOI regions into 12, organized around watersheds.

“At the end of the day, all of this is focused on better serving the American people,” Bernhardt said.

The reorganization has also included revisions of the department’s business processes,

“We’ve really sped up a lot of the the way projects move through our approval process,” he said. “That may be one of the most consequential reorganizations. We’ve been in a position with government for a long time that we’ve been almost paralyzed by analysis. We’ve gone from an average of 5.2 years per EIS (environmental impact statement), to last year, 1.2 years.

I think with the new regulations we can do that or better pretty consistently.”

Bernhardt hopes that streamlining can help reduce delays and costs for infrastructure projects on public land.

“With that, good projects get approved and bad projects get denied, but there’s no reason for it to take seven, 10 years,” he said.

President Trump’s commitment to the Trillion Trees Initiative will involve a significant effort by the Department of Interior.

Bernhardt estimated the department planted 18 million to 20 million trees a year, slightly less than the Department of Agriculture.

“We work with companies that are rehabilitating and reclaiming land,” he said. “In some places, we’re fighting invasive species and then planting native vegetation.”

There’s no way the department would really go wrong in its part of a reforestation effort, he said.

“Whatever a person’s perspective on climate change, there’s no doubt that increasing greening has a lot of upside. When you get down to it, plant life is the very basis of life.”

The Department of Interior has a wealth of data, but it is plagued by incompatible formatting and will need work before its user-friendly for the public to make sense of. Frankly, Bernhardt said, it needs work before department staff can make sense of it.

“We have so much data and we have a ways to go before it’s seamless to the American public,” he said. “Some of the data in GIS files but different offices use different standards, so I can’t unpack it. We spend well over $1 billion a year on GIS data and we need to really make it usable and transparent for the American public. That’s an area where there’s a lot of interest.”

The department is finishing up a web tool that allows users to enter a ZIP code and can see nearby wildlife refuges and what species living there can be hunted.

Counties and the DOI

“Over the last three years, it’s my hope that the counties realize that we are accessible to them, that we seriously consider their positions and they should know that the people at the top at Interior fully recognize how significant the decisions we make can be on those counties,” Bernhardt said. “As a result of that, we take it extremely seriously when they have a decision coming across our desk, that affects them in a particular way.

“I hope that they walk away saying we have a good relationship, we’re not going to agree on everything but what I want them to know is that there’s never an instance that we disagree where we haven’t gone through a real effort to see ‘how does this line up with the law, how does this line up with the president’s policy?’ and try and harmonize those with their wishes.”