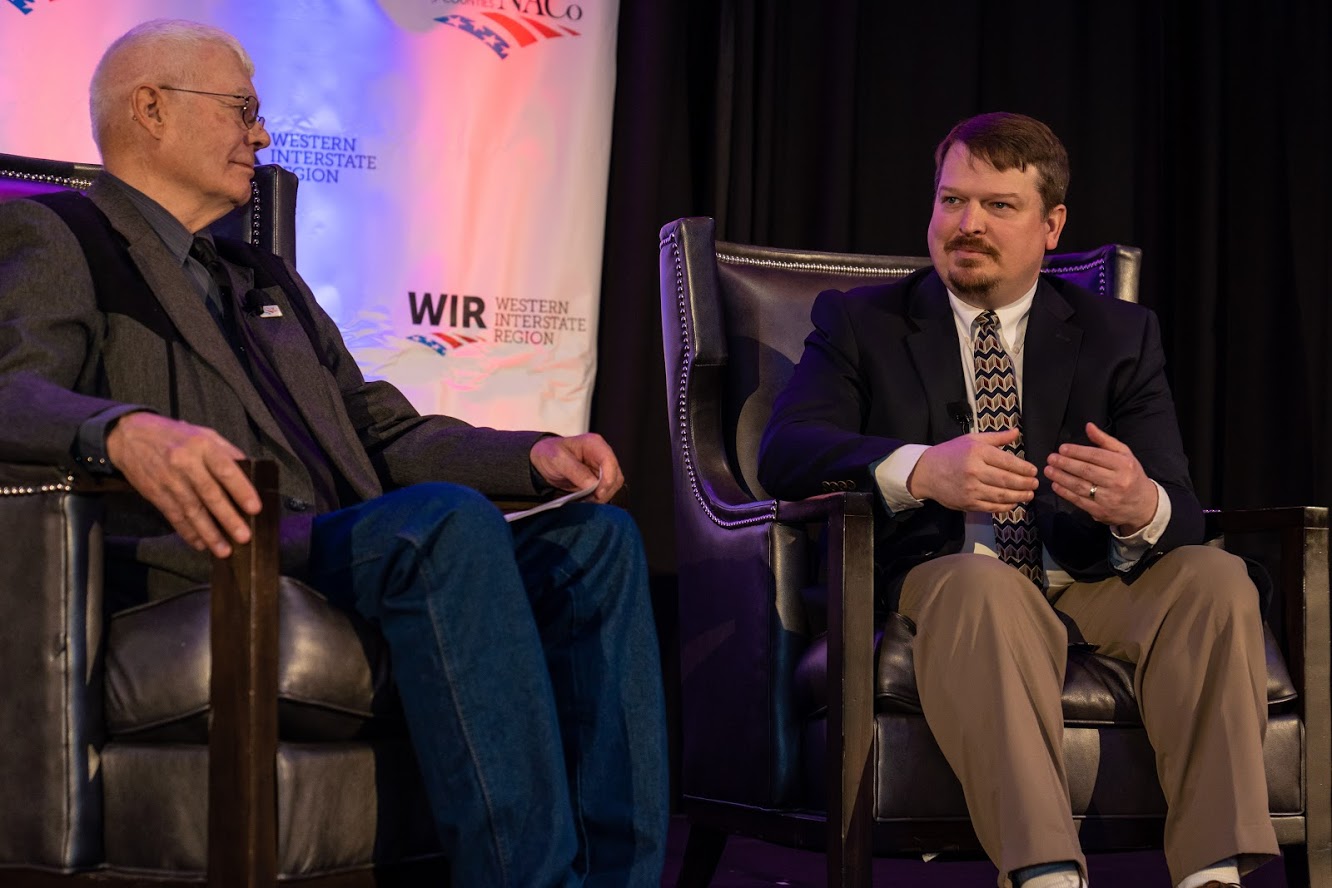 WIR Past President Joel Bousman interviews Joe Balash, the Department of the Interior’s assistant secretary for land and minerals management, during the WIR Conference's General Session May 17. Photo by Hugh Clarke

In order to filter by the "in queue" property, you need to add the Entityqueue: Queue relationship.
Interior assistant secretary updates on resource extraction policies at NACo's WIR Conference

Alaska native Joe Balash is one of many rural westerners in leadership positions at the Department of Interior. As assistant secretary of land and minerals, his role there is part of a statement by the Trump Administration as to how the department will be run.

“It’s more than just having people from a western city who go out to the rural parts of their state for recreation, but having people (in DOI leadership) who have lived in, grown up in and understand the management of federal lands impacts the lives of everyday people,” he told the WIR General Session audience May 17.

That placement of Interior personnel is chief among the department’s priorities has been restoring the trust of western constituencies. Balash updated the WIR members on the first two-plus years of the Department of Interior’s operations.

In his own perview, he is stressing the need for an inventory of critical and strategic minerals and a way of making them accessible. That includes simplifying land use designations.

“There seems to be custom descriptions of different land use designations in almost every single plan,” he said.  “The problem with that is that it creates a little bit of sleight of hand in understanding what exactly what is being proposed.”

Along those lines, streamlining the National Environmental Policy Act is also a high priority, but with sensitivity for local input that could reach the state and even the county level.

“The current public comment time is 90 days, and as we try to streamline the NEPA process to get things done in one year, we’ve found that the comment period eats up a big part of that timeframe,” he said, while acknowledging some states might want to allow more comment time. ”Finding a way to make sure there’s a state alternative but also a county alternative is something that makes a lot of sense.”

The Department of Interior has taken a series of steps to encourage oil and gas drilling on public lands, which has cut application time by nearly two-thirds, down to roughly 100 days. It maintains a standing task force to look at applications for permits to drill, increased the availability of information technology and training to those charged with reviewing applications, using authorities, like categorical exclusions, already on the books and updating regional management plans for place where energy development is a high priority.

“We’re looking for ‘all of the above’” for energy generation, he said, but was concerned that regulations guiding certain renewable energy types were counterproductive and would need revision to be competitive with fossil fuel sources.

The said the dual administration of the Endangered Species Act between the Interior and Commerce departments was causing confusion in the courts.

“We’re attempting to bring them into alignment as best we can, and using the same standard for when a species goes on the list or goes off the list.

“Ultimately where we want to get is a place where if a species needs to be listed, the actions we take are going to lead to preservation and restoration of that species’ population, some outside groups use the ESA as a weapon to prevent certain activity,” without basis.

He is hoping for a rule to reconcile that rift by the end of the summer.

Balash considers the Bureau of Land Management’s handling of the sage grouse as the best example of how the Trump Administration has approached a difficult issue, by developing a state-by-state approach, bringing in widespread input as to what chances they would like to make to sage grouse management plans.

As for counties working more closely with the Department of Interior, Balash said the most important things they could do is be cognizant of the department’s schedules and cycles and bringing as much accurate information to the department that they have.

“Sometimes we literally have to flip through books to find things,” he said. But with GIS, a lot of that data could be better expressed electronically.