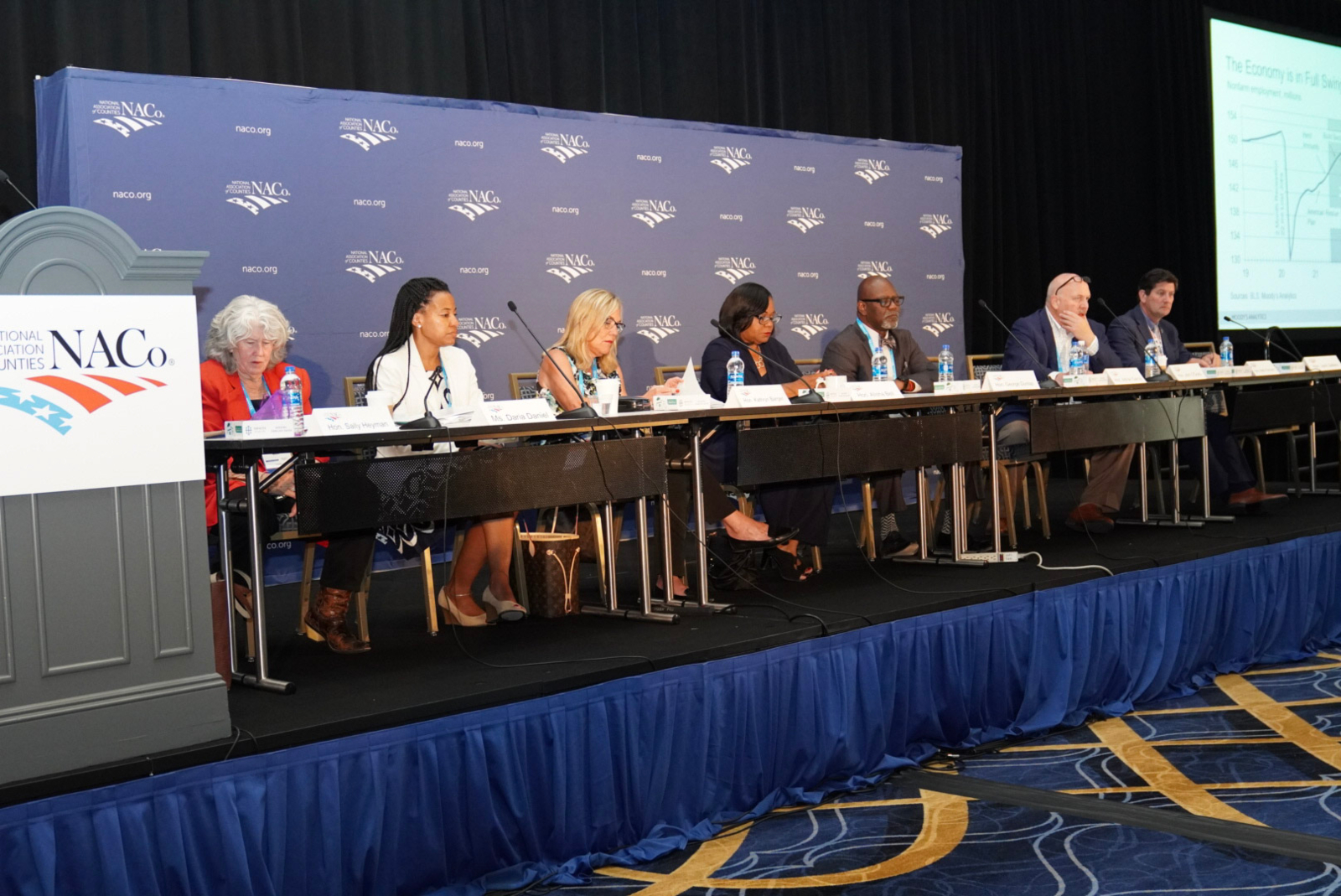 Some of the members of the NACo’s Large Urban County Caucus hear from an economist at their meeting July 11 at the Annual Conference. Photo by Hugh Clarke

The country is on its way to a full recovery post-COVID-19, according to Moody’s Analytics Chief Economist Mark Zandi.

Zandi’s observations were a part of a meeting of NACo’s Large Urban County Caucus (LUCC), whose members discussed COVID-19’s economic impact and smart infrastructure July 11 at the 2021 NACo Annual Conference.

Zandi shared his outlook on the upsides and downsides of a post-COVID-19 economy.

The country lost 22 million jobs last March into April at the height of the pandemic and the country is still down 6.8 million jobs from pre-pandemic levels, according to Zandi.

However, it’s his opinion that the country will fully recover from the pandemic by early 2023.

“I think this will be one of the quickest economic recoveries from recessions since World War II.”

When looking at the outlook of the economy in a post-pandemic period, Zandi said he thinks there will be several fundamental changes that will have long-lasting shifts in the economy.

He cited an increase in online use, less travel, more remote work and the migration away from urban areas.

“I don’t think it’s ever going back to where we were,” he said.

While Zandi is optimistic about the future, he said there are some risks — one being disinflation.

“Obviously the economy has reopened very rapidly,” he said, explaining how increased demand causes supply prices to increase with both commodity prices and industrial prices spiking.

“In my view, this will be temporary,” he said.

Zandi said another risk relates to the government support that has been keeping the country going throughout the pandemic.

“Those supports are soon coming to an end… and that means a lot of households that are still struggling — lower income houses, communities of color — are going to have to adjust to all that which tends to be difficult.”

The final risk he identified is the pandemic itself and the possibility of a resurgence.

“There are risks as I mentioned… but I do want to say I feel about as good about the economic outlook as I have in a long, long time — including before the pandemic,” he said. “It’s prudent to be cautious and guarded against the downsides, but I think we can take some solace — the economy is going to be at our back the next couple of years.”

There are 50 million injuries and 1.35 million deaths worldwide because of vehicle crashes due to human error and inattention, according to Stefania Yanachkov, Waymo’s federal policy and government affairs staff.

Waymo’s mission is to improve safety on roads throughout the country.

“We believe that we need to just remove the driver and really believe in nothing short of fully autonomous technology,” she said.

Fully autonomous driving is unlike other technologies that may ask a driver to take over or intervene during the ride, she said.

“Waymo is always the driver, from beginning to end,” she said. “You don’t have to sit behind the wheel or have a driver’s license to use our technology.”

The technology provides a 360-degree view of up to three football fields in all directions of the vehicle.

Yanachkov described the Waymo One, a ride-hailing service similar to Uber or Lyft, but lacks a human driver, and Waymo Via, which is a fully autonomous trucking service.

Waymo One is currently only available in the Phoenix area but does not require specific infrastructure to be implemented.

“We’re aware that a priority for local governments is really integrating the technology and services with public transportation, but also making transportation systems more equitable and sustainable,” she said.