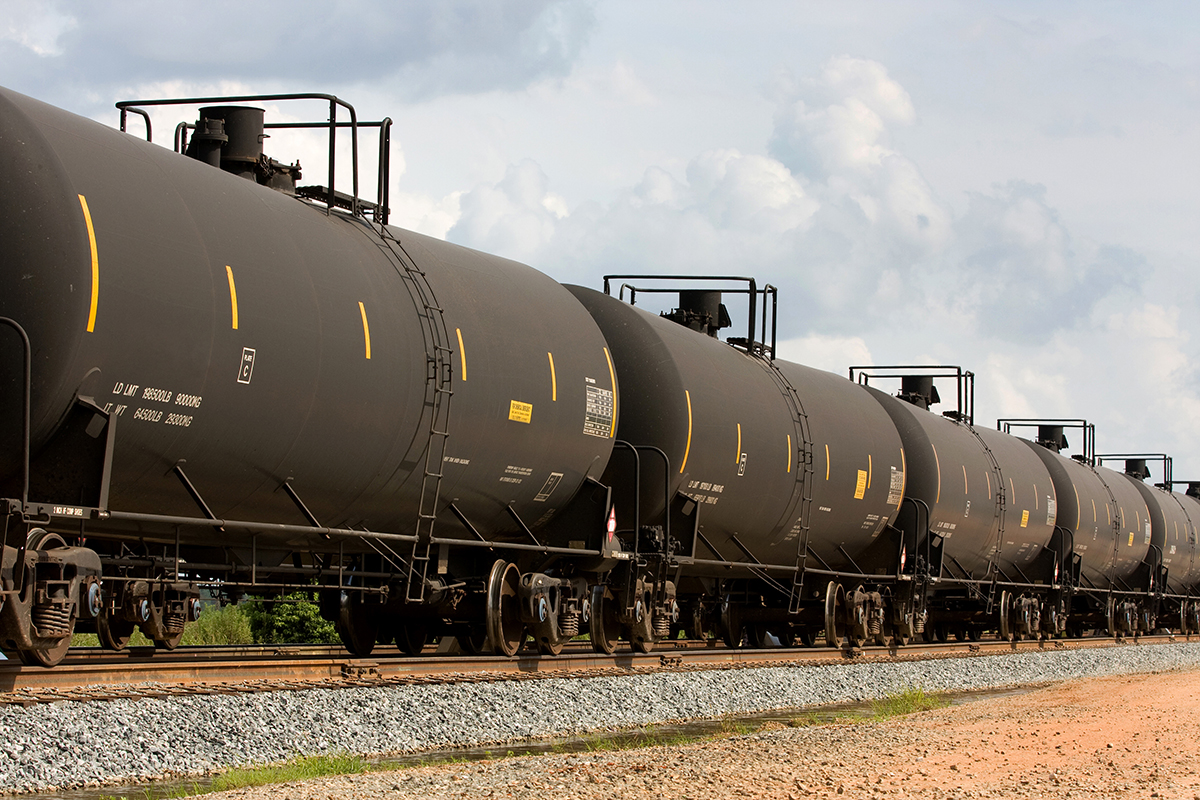 More crude oil than ever is now moving across the United States in railroad cars, but it's going to move a little slower after new U.S. Department of Transportation regulations take effect. Rail shipments of flammable liquids, primarily crude oil and ethanol, are now subject to new speed limits and routing restrictions, among other provisions of a final rule on transport of those liquids, issued May 1. Five days later, another train derailed and caught fire in North Dakota, adding to the more than a dozen domestic train derailments resulting in spilled Bakken shale oil in less than two years.

Thick black smoke rises from the oil train derailment near Heimdal in north central North Dakota on May 6. Photo courtesy of Curt Benson

Trains carrying primarily crude oil and ethanol will now be limited to 50 miles per hour 40 miles per hour in urban areas and they will have to take the least-hazardous route, which will be determined by 27 fac tors contained in the rule. Railroads will also designate a point of contact on both routing and the contents of the tank cars who will be available to local emergency responders. A hazardous train is defined as one with 20 or more continuous tank cars carrying flammable liquids or 35 tank cars throughout the train.

"The truth is that 99.9 percent of these shipments reach their des tination safely," said Transportation Secretary Anthony Foxx. "The ac cidents involving crude and ethanol have shown us that 99.9 percent isn't enough. We have to strive for perfection."

"It all helps," he said. "There's a lot more space between these smaller communities in the Midwest, but that doesn't mean people feel safe. The general public doesn't consider the safety ramifications until something happens with these oil trains."

Judd Freed, director of emergency management for Ramsey County, Minn., sits roughly one-eighth of a mile from a rail line that carries Bak ken crude four times a day. Ramsey County was one of 15 counties of focus that DOT examined because of its population density and number of trains per day that carry Bakken crude through the county.

"The version of the (new stan dard) car seems protective and cost-effective," he said. "I'm just worried about the implementation time and whether failure to comply will have any penalty. We're accepting a high level of risk for a long time."

Despite his reservations, Freed was encouraged by the railroad industry's participation.

"I'm glad they're doing some thing," he said of the rule. "I'm glad it's not just another round of 'blame the railroads.' The big positive was that it was nice to see the industry embrace the rulemaking process. I see no reason to expect they'll take all this time to upgrade their cars. They probably won't wait until the last minute."

Freed said he would have liked to have seen more investment in at-grade protection. He also wishes the risk-assessment data were available by county, rather than by state, so counties could figure those numbers into local planning.

"If we could get all the risk data about the physical critical infrastructure, that would be very helpful," he said.

He is also concerned about plans to take advantage of new braking systems by running trains closer together because those systems were developed and tested at a lower density.

Safety improvements included in the final rule were forged by DOT with input from the Federal Railroad Administration, Pipeline and Hazardous Materials Safety Administration and Canada site of the Lac-M gantic derailment and fire that killed 47 people in 2013.

In addition to the speed limits and routing requirements, the rule mandates a new enhanced tank car standard and a risk-based retrofitting schedule, a new braking standard, operational protocols for trains car rying large volumes of flammable liquids and new sampling and testing for oil.

That train that derailed in Lac- M gantic carried its oil in the DOT -111 tank car, a design rendered ob solete by the final DOT rule. Those cars will now have to be retrofitted to meet the standards set by the new DOT-117, which uses a stronger, thicker shell.

Foxx pointed out that the en hanced breaking system mandated in the rule for trains traveling faster than 30 miles per hour could have prevented a collision with a stopped train in a 2013 derailment in Cass County, N.D.

"(These brakes) can be the differ ence between a contained fire and a catastrophe," Foxx said.

More than 182,000 signatories were represented in roughly 3,200 comments submitted to DOT. The rule is the culmination of almost 30 actions the Department of Transportation has taken over 19 months, including emergency orders and safety advisories.

The Wells County, N.D. derail ment in early May forced the evacu ation of the 40 residents of Heimdal when the BNSF train carrying crude oil from the Bakken shale caught fire. There were no reported injuries or incidents of property damage in the incident.

Wreckage of the BNSF oil train derailment smoulders just outside of Heimdal, N.D., more than 10 hours after the accident. Photo by Eric Hylden / Forum News Service