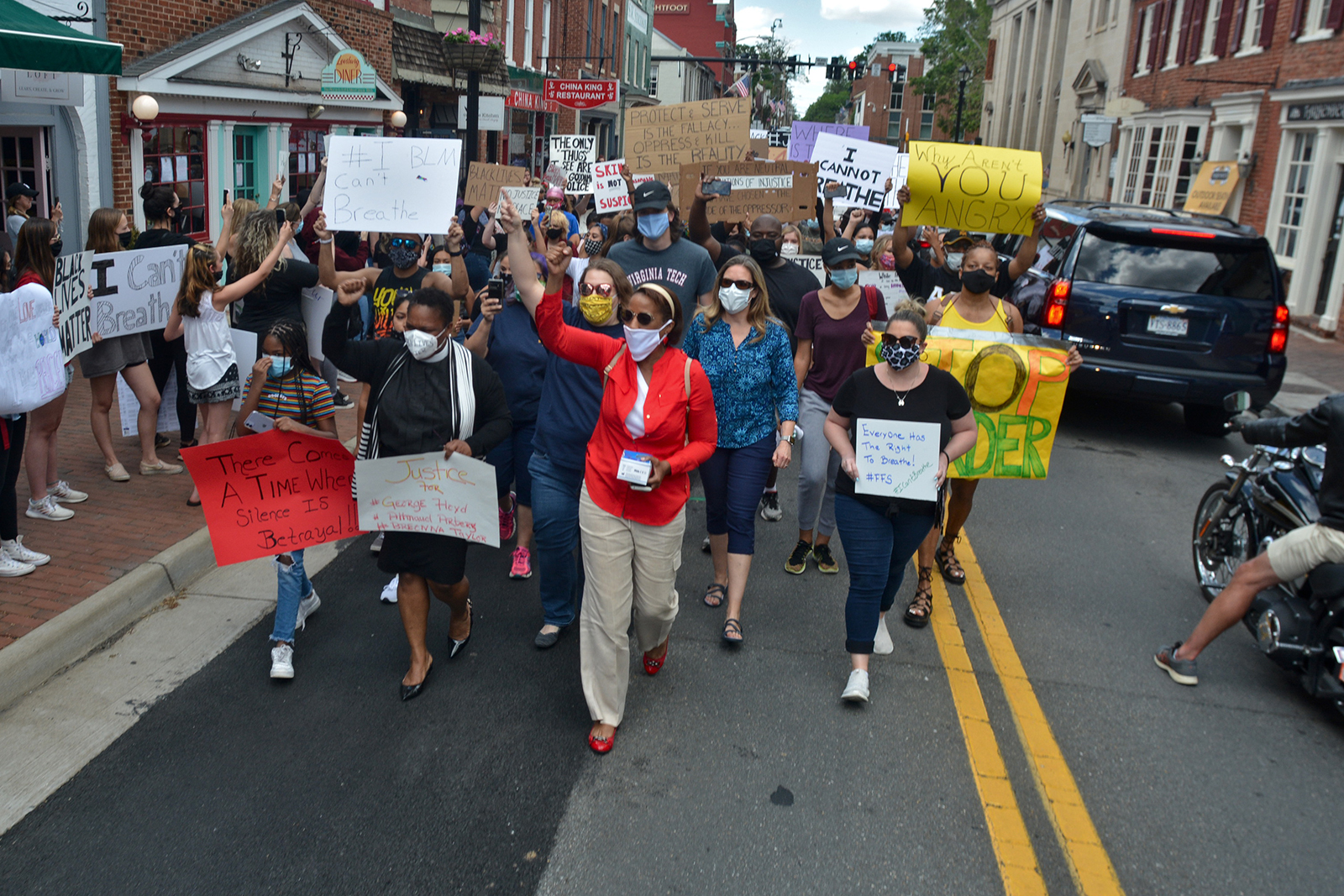 Loudoun County, Va. Supervisor Phyllis Randall, chair of the Board of Supervisors, walks with residents in a demonstration against racial injustice May 31 in Leesburg, Va. Photo by Renss Greene|Loudoun Now

The death of an African American man, George Floyd, in police custody May 25 in Minnesota has drawn reactions from county officials across the country, as peaceful and violent protests continue around the nation.

“We extend our heartfelt condolences to the family and friends of George Floyd and communities in pain across the country,” said NACo President Mary Ann Borgeson, a Douglas County, Neb. commissioner, in a statement.

“We must redouble our efforts to foster constructive, civil dialogue and actions on issues related to race,” she said. “Violent demonstrations will only deter the worthy pursuit of justice and equality in our communities. As county elected officials, our purpose and focus must be to build safe, vibrant counties where ALL our residents can thrive.”

In recent years, counties across the country are partnering with stakeholders in their communities to examine policies of racial equity to ensure that all boats are lifted. County sheriff departments are also looking at their training policies to prevent racial profiling.

Meanwhile, last week, county officials participated in marches to show their support for the cause of racial justice and equality in light of the violence in Minnesota.

In Michigan, Genesee County Sheriff Chris Swanson laid down his helmet and baton to join a crowd chanting “Walk with us!”

“When I saw the crowd and felt the frustration and the fact that we were only accelerating the issue, it was time to take the helmet off, go to the shot-caller, the lead organizer, give him a big fat hug, and say, ‘What do we need to do?’ That was the tension-breaker ...,” Swanson said in an interview on NBC’s Today show. “They wanted to know what I thought and I looked at the lead organizer and said, listen, that guy (Minneapolis Police Department officer Derek Chauvin) is not who cops are. We’re horrified. They said, the crowd needs to hear that. I said, get the crowd.” Chauvin, faces a second-degree unintentional murder charge in Floyd’s death, while three other officers on the scene also face charges.

Spokane County (Wash.) Health Officer Dr. Bob Lutz joined thousands of people last week protesting racial injustice, marching to the Spokane County Courthouse. “It really showed that people of all colors are not willing and not wanting to allow this issue to rest,” Lutz told The Spokesman-Review. “We mustn’t allow the ill will of a few, however, to detract and distract from the will of thousands who rallied yesterday in downtown Spokane, who peacefully protested the killing of George Floyd and the many black lives.”

Some county officials, including Franklin County, Ohio Commissioner Kevin Boyce, were caught up in protests that turned violent. Marching with other local leaders in Columbus, Boyce was pepper sprayed during a march decrying the death of Floyd.

The Franklin County commissioners also issued a statement: “We don’t have all of the answers to these very big issues, but we see them and we are committed to working with our community on solutions. Peaceful protest has a long and important history in our country, and we will not condemn it. We do call on both the protestors and the police to exercise restraint. The safety of all of our community members must be our highest priority. Addressing the systemic inequities that have led us to this point must be our ultimate objective.”

In Minnesota, the Ramsey County Board declared a monthlong state of emergency after the civil unrest, looting and arson following the death of Floyd. The declaration, in effect until June 30, overlaps the county’s other ongoing state of emergency for the COVID-19 pandemic response.

Coronavirus testing sites in Los Angeles County were shut down last week when nearly 3,000 people were arrested during protests there.