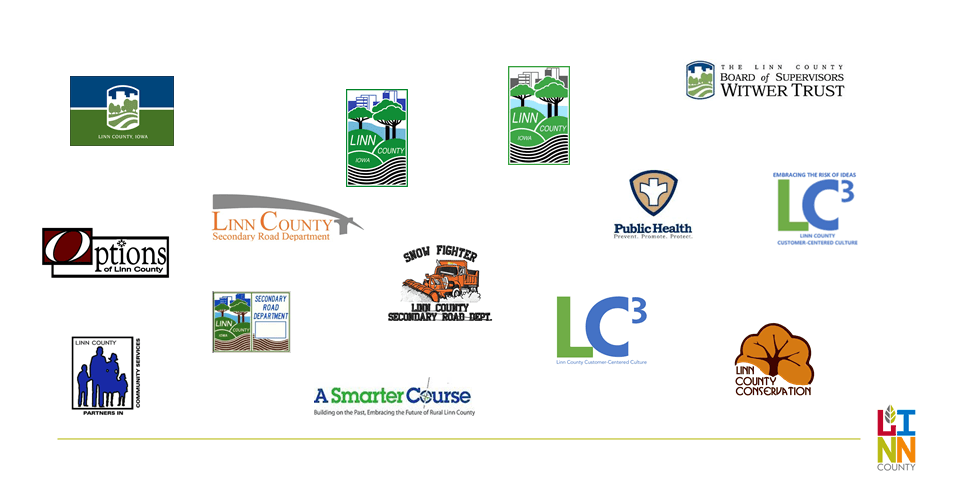 In order to filter by the "in queue" property, you need to add the Entityqueue: Queue relationship.
A re-branding effort isn't just a cosmetic change - it's an opportunity to examine the way citizens experience interactions with county government

The Linn County, Iowa Secondary Road Department was in charge of clearing roads, so it seemed natural for equipment to bear pictures of snow plows, hard at work. Visual shorthand for the county’s conservation department? A tree, of course. But the actual county seal was a modernistic collection of trees, buildings and rolling hills along the banks of the Cedar River.

A look at the collection of the county’s different logos could beg the question — are they all on the same team?

“Counties in general are pretty diversified,” said Joi Alexander, Linn County’s communications director. “There is a problem sometimes, where people wonder if something is a county department or a nonprofit that includes the county’s name.”

Likewise, communications from individual employees could be a crapshoot, right down to the signature on people’s emails. Linn County doesn’t have a central administrator dictating policy, so it was natural for different departments to fracture like that.

“Some people just had their name, others have their favorite quotes,” Alexander said. “We didn’t have a policy in place, so we didn’t have any standards or expectations.”

Linn County is in the middle of a re-branding effort that Alexander and several officials hope will put all of the county government on the same page. Other counties are doing the same thing, with the intent of establishing unified messages and consistent visual identities, or more fundamental changes.

Washington County is also re-branding, and in November the County Board approved a new logo for the county as part of a larger effort that included stakeholder meetings and public input. The suburban county northwest of Milwaukee has as common of a name as you’ll find in local government, with 30 counties (and a Louisiana parish) naming themselves after the first U.S. president. In that case, not making a name for itself among nearly three dozen competitors would be tantamount to willfully heading to the back of the line.

“We’re competing for the labor market, for businesses to locate here,” said Jamie Ludovic, Washington County’s central services director. “People make a judgment about you in the first 10 seconds, so you have to look professional.”

Part of Washington County’s problem was that the previous county logo did not transfer well to different media.

“Technology was really an impetus here, we were going to have to recreate the logo and symbols anyway,” Ludovic said. “Our re-branding was part of a larger communications strategy planning process.”

Jefferson County, Colo., another county with a popular name, also came upon re-branding in the process of reckoning with new technology. In this case, the county was overhauling its website and wanted a clean look.

“We had been using the same seal since the 1800s,” said Kate McIntire, Jefferson County’s public affairs director. “It was time to update it.”

In making wholesale changes to a county’s style, some risk lies in alienating stalwarts who identified with the “old look.”

“Getting a handle on the culture shift was hard,” she said. “Everyone had developed their own identity for a while, so we didn’t want to separate them from that, but we really had to re-frame what being one county meant.”

“We had to balance the diversity of different needs,” McIntire said. “The perceived loss of identity was a hang up, so we made up for that by trying to differentiate within the (new) brand.

“We wanted to balance how to continue to honor the history while still moving ahead it to a more modern vision. The key to that was to come together around shared values before we started thinking visually.”

Talking about those ideas could be challenging with both county staff and their elected bosses in the room, so Jefferson County’s consultant used anonymous keypad polling in group discussions to help level the playing field and take the intimidation out of discussions.

Ludovic said resistance to a new brand in Washington County was based in large part over concern that the county was throwing away something that represented the work county staff had done together. And that re-branding can seem like a luxury, given the demands on county budgets.

Washington County Administrator Josh Schoemann acknowledged as much in an email to county staff.

“I know $30,000 seems like a lot of money for a few words and the icon,” he wrote, stressing that the process would be worth the money and effort.

Ludovic said the decision to re-brand wasn’t taken lightly, and the County Board had an earnest debate about the wisdom behind it.

“We’ve heard ‘why are you spending money on this when you aren’t funding X; you aren’t able to serve these people in need,’” she said.

“That’s a difficult thing to address, but you need to have the right, business-minded people who see it as an investment in our future. The majority of our County Board and the majority of our department heads that feel it’s important.”

Linn County managed to complete its process without hiring an outside agency.

“We did it, but I wouldn’t do it again that way,” Alexander said.

“It was a budget-driven decision, but we missed out on a lot of things like focus groups and stakeholder meetings.”

Linn County got its new design the way a lot of counties found their seals — they asked for submissions from citizens and businesses located in the county.

The winning submission, the county’s name, complemented by a two-toned leaf, will — like many new logos from this crop of re-branding projects — be replaced online first at little to no cost.

“We can take care of electronic changes easily, that’s a low-cost process,” McIntire said of Jefferson County’s re-branding, for which a consultant was paid $50,000.

“We’ll include redesigns of vehicles and other physical assets as part of the regular maintenance budgets. There’s no need to replace everything at once.”

Not just a pretty picture

In Washington County, the branding effort is going deeper than standardizing artwork. The process begun to solicit input from county departments has continued, bringing county workers on board to align various departments to create a feel and customer experience that reinforces the image the county hopes to convey.

How Washington County would be interpreted would be the result of deliberate planning and execution on the part of county staff.

“It’s important what we’re driving — that image in the community,” Ludovic said. “How it appears, how we interact with the public, that feeling people get when you walk into the courthouse, those are direct results of somebody taking the time to figure it out.”

Ludovic said departments had individual discussions among themselves about where they fit in the overall county and where they are headed.

Schoemann emailed county employees, explaining why the exercises in the re-branding effort were important and how it went beyond attractive new logos. “Similar to any journey, the documents will serve as the map and compass necessary to determine where we are at, where we are going and shooting for,” he wrote. “Without these critical tools, decisions can easily return to being more haphazard with things like across-the-board cuts, a compensation plan that fails to compensate, being all things to all people and being mediocre at many things instead of being great at a few high priorities.” The branding effort yielded mission and vision statements that stress the county’s stability, reliability and quality of life, and Schoemann suggested that county staff could look to the new seal as shorthand for their commitment to that mission and vision.

“Without those words and a symbol to represent them, we are all too easily lost in the busywork of our day-to-day.”