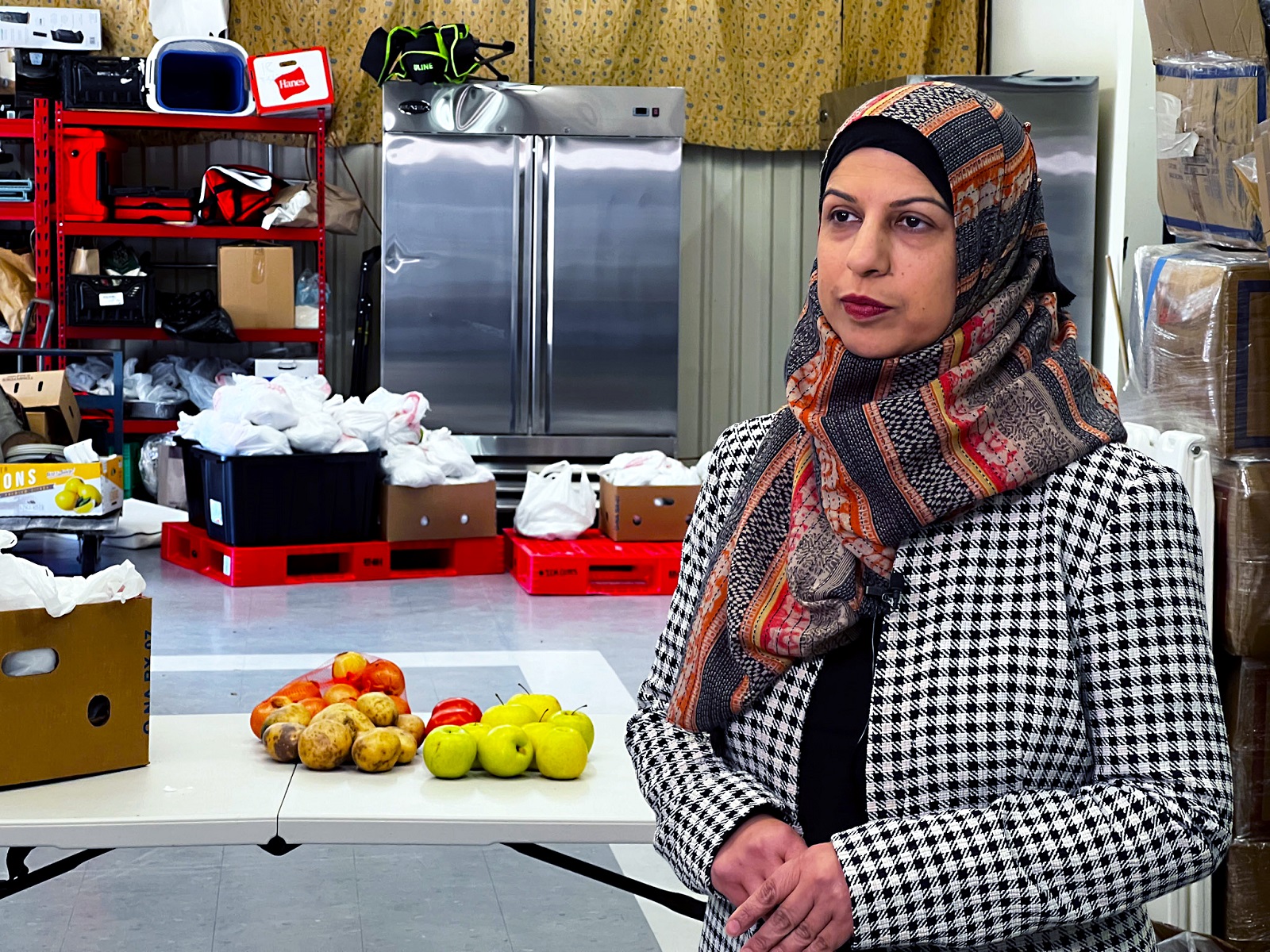 The sign outside of the Islamic Center of Maryland has carried the same message for two years. “#ICMCARES — RESPONDING TO COVID THRU FAITH.”

Adileh Sharieff, a trustee for the mosque in Montgomery County, wrote the message early in the COVID-19 pandemic. For two years, in addition to nourishing congregants’ souls she and her team have been nourishing their bodies and more.

“I put it up and just kept it there,” she said. “Nobody has said anything about taking it down yet.”

The mosque is a part of an operation to ensure that residents haven’t gone hungry as the pandemic has uprooted lives, jobs and careers.

“Montgomery County is one of the most expensive places in the country to live,” said Heather Bruskin, executive director of Montgomery County Food Council, which executes the county’s food security plan. “We have many residents who make too much to be eligible for benefits but not nearly enough to cover all their costs of living.”

“That was a staggering number,” Bruskin said. “Even though on average we’e one of the wealthiest counties across the country, we actually have tremendous income inequities.”

“We knew what strategies are needed to build our resilience in the community and address hunger in our local population,” Bruskin said, noting that the group didn’t have the resources to be creative and flexible with its strategies for food distribution. In addition, the council’s new food assistance resource directory and online searchable map allows residents to find providers close to them and providers could connect and coordinate with each other.

“We didn’t know who all the providers were, what their services were like and there were a lot of redundancies in services,” Bruskin said. “We really needed as many partners as possible who had deep connections within hard-to-reach communities.”

The Islamic Center has been one of those partners. Trustees capitalized on the ties of faith to let congregants know where could find food. The mosque initially relied on community donations to fill its pantry before associating formally with the food council and the Manna Food Center.

“We started out reaching out to our seniors first and then we started doing our food drives and distributing to the greater community,” Sharieff said. “Food is so basic that it should be available to everybody and that’s kind of what we did. Whenever we’re doing our food distribution, anybody gets something.”

Sharieff also found out that a distribution system without registration was more appealing, partially because some worried it would interfere with their visa status but also because others didn’t want to be on a list.

“It was a matter of pride for a lot of people to be on a list where they might be somebody that is requiring help,” she said.

The mosque became a natural nexus for delivering vaccines and other crucial supplies too. The turnout to do the work touched Sharieff, who noted that the working conditions, including wide-open doors during the winter to provide safe airflow, weren’t always comfortable for volunteers. They also responded in force when she solicited donations for children’s books.

“It makes me very emotional when people come back,” she said. “They’re giving their time after a long week, but people were essentially putting their own lives at risk in order to make sure somebody has the food so that they’re taken care of. I’m grateful to the people that came to ICM because they trusted us, they liked our service, it was volunteers, it was family-based. I’d have seniors, kids, I people of all ages.”

Invisible hand in the fields

Since 1980, Montgomery County has designated 93,000 of its 324,480 acres as an agricultural reserve, restricting development to one house per 25 acres, and supporting 558 viable farms, 454 of which produce crops for local consumption.

“We need to focus on growing more food and producing more food here locally because California and other parts of the world aren’t always going to be our breadbasket or our grocery store,” Bruskin said. “Climate change and political impacts globally are going to affect our ability to feed our community outside of likely future pandemics.”

Michael Protas has been running One Acre Farm in the ag reserve for 15 years, and he’s seen the attitude change recently. “You could certainly just go the grocery store and get your tomatoes, maybe they weren’t in season, but people did start getting the sense that maybe [they] can’t always just rely on this system that is very fragile, and nobody understands how it works and sometimes it just doesn’t work,” he said.

Prior to the pandemic, Protas had a consistent roster of 200 clients for this community-supported agriculture operation, through which he would supply food 22 weeks of the year. Thanks to grants through the American Rescue Plan, he’s built two high tunnel greenhouses, allowing the farming growing season to nearly double, to 43 weeks, and participate in the Food Council’s Farm to Food Bank program. The farm was also able to build an office, which helped its business operations, gives workers a respite from the summer heat and allowed the farm to play host to other small farmers from the county.

“Small farmers are generally very independent, so we kind of like to be on our own. But it is important and there’s a huge knowledge base that not everybody has,” he said. “In the traditional business sense, you don’t share your knowledge with your competitors, but in the farming world, there are so many people in Montgomery County and farmers are such a small percentage of the population. Even if I wanted to, I wouldn’t be able to feed one-one-thousandth of the population of Montgomery County.” Nearby, Bridgette Downer owner of Chicken of the Woods Permaculture Farm has seen her subsistence farming operation grow thanks to ARPA funding through the farm-to-food bank program. Previously serving a customer base of 90 homes in two subdivisions, her farm has transitioned to high calorie, indigenous crops like corn, beans, squash and sweet potatoes that can be preserved easily and can sell for a fair price.

“Whenever we would have crops to harvest, we would call up community food rescue and we’d actually get volunteers to come and help with harvest,” Downer said. “Now we can grow crops with a greater security that there would be a purchaser. Now we’re able to design our crop planting charts such that we would have a very large harvest and all we would be responsible for was getting that harvest boxed.”

The fall of 2021 saw the sIart of the food council’s SNAP outreach program, which addresses a disparity that shows Montgomery County has the lowest enrollment rate in all of Maryland relative to the number of eligible residents. The county is asking local schools to refer families who are not connected with benefits who might be eligible.

After setting a target of 60 encounters with new SNAP enrollees a month, the council kicked off with 150 requests for support in the first two days.

“I think it really underscores how we have a lot of work to do as a community to make sure that we’re still reaching out and finding those people in those households who aren’t connected to the support that they need so that we can close these gaps even further,” Bruskin said, noting that enhanced SNAP benefits were due to expire soon, taking monthly benefits down to $30, from $130.

“The pandemic really showed us how hyper-local partnership with both state and federal-level government partners is really critical to being able to harness the resources that are available to connect on-the-ground expertise of our community and be able to take advantage of the tools that really the federal government has alone to be able to support these community challenges,” Bruskin said.

“The American Rescue Plan Act funding gave us the opportunity to try new things and we found out that they worked. So even though that funding is spent, we now can go to private funders, or to our county government, or to state funds and be able to replicate this program and grow it through other resources because we’ve shown that it works.”