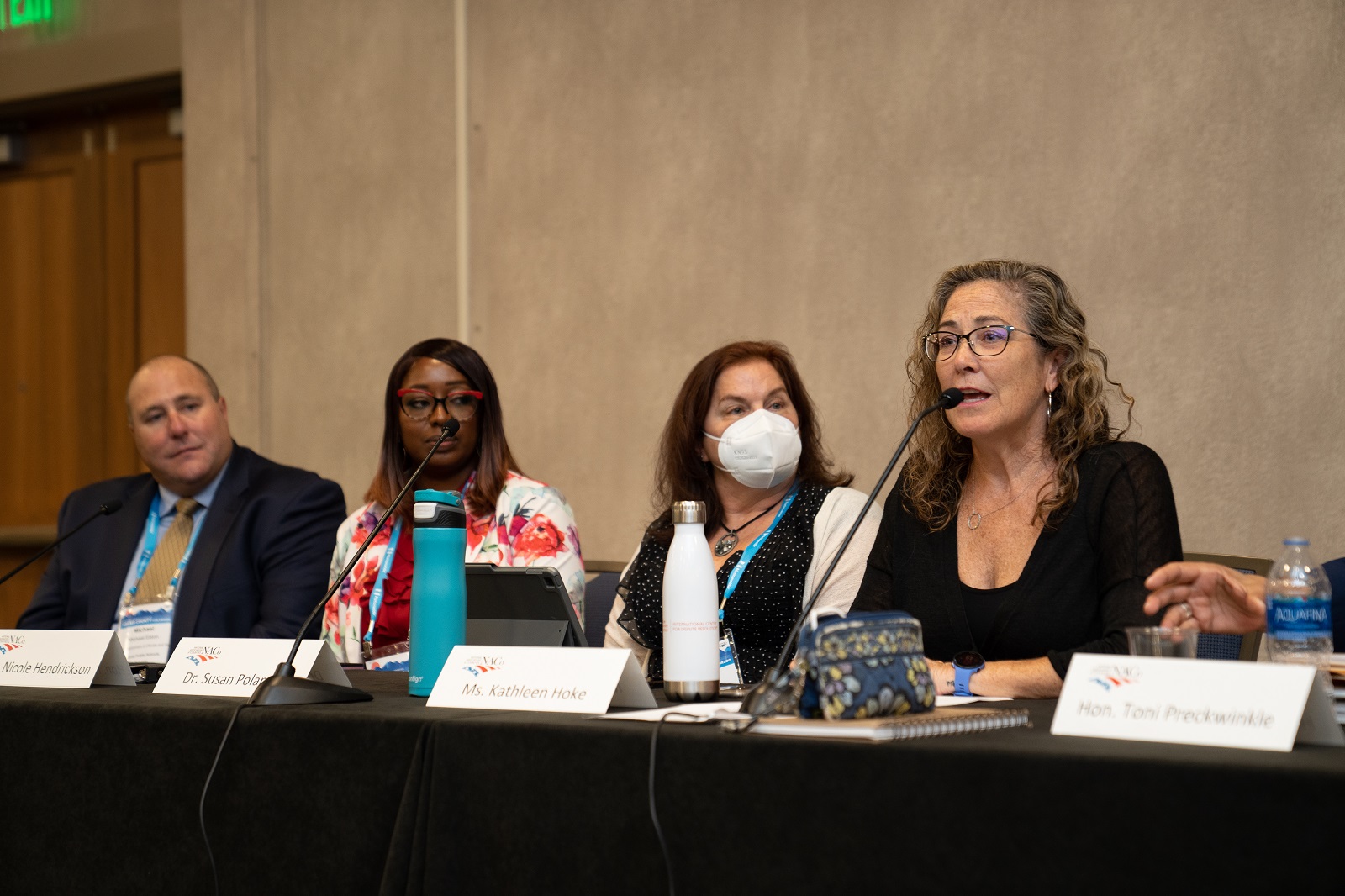 Pots are boiling over across the United States and while police and prosecutors work to clean up the spillover of gun violence (more than 75 percent of murders in 2020 were committed with a firearm, according to the Brennan Center), hoping those examples will serve as a deterrent, counties are trying to lower the temperature in their communities.

That tactic involves treating violent crime as a public health hazard. Mecklenburg County, N.C. houses its Office of Violence Prevention, the first in the state, in its public health department. That effort is celebrating the run-up to its second anniversary with the release of its community violence strategic plan.

“We have a lot of communities across Mecklenburg County and across this country that have been disinvested in over a long period of time,” said Tracie Campbell, senior health manager in charge of Mecklenburg County’s violence prevention efforts. “Because of that, we got to the place that we are. There are a lot of inequities in health outcomes, there are a lot of inequities in education, in transportation, in housing, in food security — all of those things are things we’re working on. All those things are violence prevention.”

Mecklenburg County’s findings track with what the Brookings Institution has seen nationwide — not a dramatic increase in crime across the board, but spikes of gun violence in underinvested areas, which accounted for a 30 percent rise in the national murder rate between 2019-2020. In July, the Council on Criminal Justice found that homicides had decreased slightly in 23 major cities in the second half of 2021.

Much of the overall county effort encourages collaboration among disparate human service agencies and nonprofit organizations working on the root causes of poverty and inequity, tied together strategically. The county-led Carolina Violence Prevention Collaborative systematically coordinates the efforts of almost 200 community-based organizations working to address those insecurities and looks for the gaps in those services.

“A lot of those community-based organizations were not necessarily working together,” Campbell said.

That’s not to say there’s nothing new happening in Mecklenburg County — the county and the city of Charlotte are each contributing $250,000 to fund a violence interruption program, an adaptation of the “cure violence” tactic, which embeds social service providers in high-risk communities, who then work to earn the trust of residents in need of help. From there, the “violence interrupters” can be a liaison between the community and human service providers on a regular basis. They also jump to action on demand: When a community member is wounded in a violent incident, the violence interrupter visits them and their family and friends to discourage retaliation.

But the comprehensive approach is what Campbell says will make a difference.

“This work is long and hard, and you don’t see the difference really quickly,” she noted. “It takes a while for you to actually see something happening, but you’re going to have greater outcomes when you collectively apply more than one of these strategies and work together.

“That’s what we’ve seen across the country, that people are having great success or greater … because they’re doing more than one thing. You can’t be a one-trick pony.”

Cook County, Ill. is also targeting the roots that lead to violence, investing $85 million over three years in grants to neighborhoods and municipalities seeing the highest rates of gun violence.

“It’s no coincidence that our neighborhoods with the highest rates of gun violence, neighborhoods where people who do not feel safe, are Black and brown communities that have experienced the history of racism, police brutality and disinvestment and traumas,” County Board President Toni Preckwinkle told NACo’s Health Policy Steering Committee at the 2022 Annual Conference in Adams County, Colo.

“In a single weekend in Chicago, it’s tragically common to see a number of individuals injured or killed that would qualify for a description as a mass shooting.”

Nicole Hendrickson, who chairs the Gwinnett County, Ga. Board of Commissioners, agreed with Preckwinkle that closing the resource gap in troubled communities was an opportunity to reduce the economic pressures that drive people to commit crimes, crediting the American Rescue Plan’s (ARPA) $65.1 billion allocation to counties.

“Fortunately, federal funding that has been allocated to local governments to address pandemic-related issues has given us unprecedented opportunities to invest in those solutions for our residents who have so many different backgrounds, so many different experiences and circumstances and they have different needs,” she said.

Gwinnett County has allocated $62.1 million of its nearly $182 million ARPA allocation to equity-focused service provisions, allowing the county to expand its Health and Human Services model to enhance community resource support in targeted underserved areas. The county also invested $29 million to address the economic inequities exacerbated by the COVID-19 pandemic.

By directing their ARPA funding to struggling areas, counties are hoping to make a difference in the lives of their residents, pierce the clouds of community disengagement and ultimately improve outcomes and reduce distrust of government. That was one of Campbell’s goals while Mecklenburg County developed its community violence strategic plan. The county held a variety of listening sessions and focus groups with residents not only to glean information, but to reach out to residents.

“People don’t think government listens, and when something is a problem and we don’t think we’re being heard, we become disgruntled,” she said. “We were really listening to people and being upfront about why the plan was important. My hope is that community will see themselves in the plan and know that their input meant something. And that’s how we’ll make a difference.”

Harris County, Texas is trying to better allocate personnel to emergency calls through its Holistic Assistance Response Teams program. By assigning trained health professionals to respond to 911 calls related to homelessness, behavioral health, substance use or nonemergency health or social welfare issues, the county hopes to reduce the workload for law enforcement by an estimated 21-38 percent of calls.

Multnomah County, Ore. is funding a behavioral health gun violence response team. The seven-person team will include a combination of mental health clinicians and peers with gang experience and will coordinate with the Department of Community Justice’s Juvenile Services Division to use therapeutic interventions to address underlying needs.

Counties nationwide are funding gun buyback programs and collecting record numbers of firearms. King County, Wash. created a permanent voluntary safe firearm and ammunition return program within the sheriff’s office. While the gift cards those buybacks offer may not deter criminals, the efforts reduce the number of guns in circulation and in households.

Counties get the handcuffs on gun regulation

While some counties are bringing in historic numbers of firearms in gun-buyback programs, particularly after the May school shooting in Uvalde County, Texas, counties have seen their ability to restrict firearms use curtailed by the U.S. Supreme Court this year.

“Before the Supreme Court’s term this year there seems to be a bit more wiggle room but certainly after the decision this term, we’re left with a much narrower window, but there still is opportunity to address the violence associated with firearms from a public health perspective,” said Kathleen Hoke, director of the Network for Public Health Law’s Eastern Region office.

New York State Rifle and Pistol Association v. Bruen still allows a sensitive places regulation, allowing governments to set regulations for their buildings and property, but the decision criticized the landmark District of Columbia v. Heller decision for giving governmental entities too much power by having an interest balancing test in setting local gun control regulations. The ruling puts the burden on governments when setting limitations.

“The government must now affirmatively prove that its firearm regulation is part of the historical tradition to set boundaries on guns,” Hoke said.

The Bipartisan Safer Communities Act, passed in June, contains several provisions and opportunities for funding for counties. It includes: