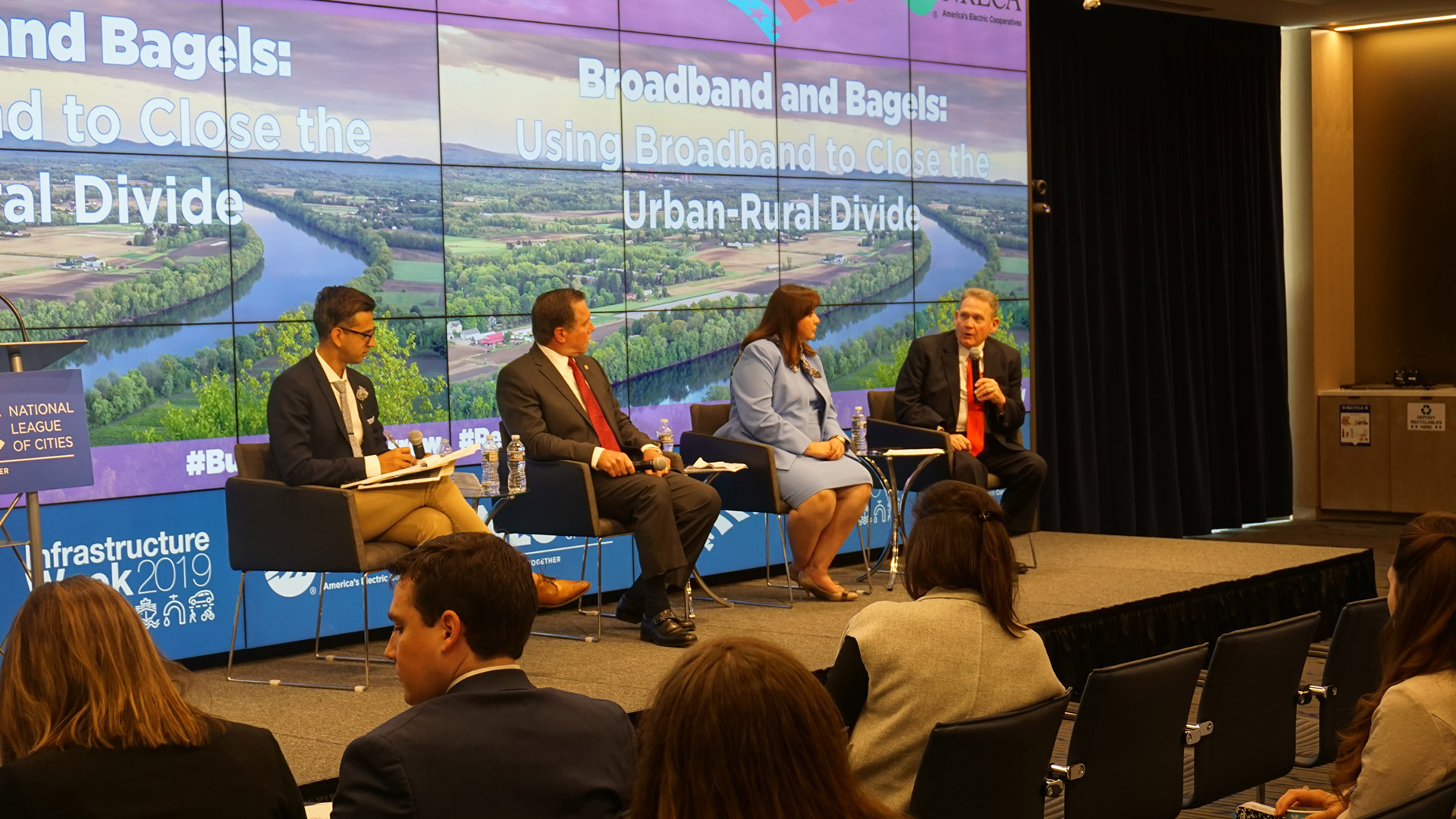 In order to filter by the "in queue" property, you need to add the Entityqueue: Queue relationship.
Counties, cities and NRECA can help the FCC identify spots where broadband is needed.

The key to getting broadband to rural areas — and to people who can’t afford it even if they have access — is collaboration, a panel of speakers said Wednesday, May 15, on Day 3 of Infrastructure Week.

That means collaboration between local, state and federal government, as well as private companies and others, said panelists during a discussion of “Using Broadband to Close the Urban-Rural Divide” co-hosted by NACo, the National League of Cities and the National Rural Electric Cooperative Association.

In 2009, Carver County, Minn. received a USDA grant for $7 million and the county kicked in $4 million, said panelist Randy Maluchnik, who chairs the board of commissioners. Working with a small private telecom firm that was successful in the bidding process, the county was able to add a fiber optic ring around the county. It helped that the telecom company owner had a history of working to bring broadband to rural areas and was excited about the project. “He was on the backhoe — there’s nothing like a passionate person,” Maluchnik said.

A piece of the broadband puzzle was getting public buy-in on spending $4 million from the county budget. “We had a lot of political upheaval … it was one of my tough votes,” Maluchnik said. But it paid off. “We were able to get a return on investment in under six years.”

In addition to hooking up its own offices to the network, other cities and towns and schools in the county were also a part of it, and formed a cooperative to purchase software needed from a private provider, he said.

Building partnerships also figured in an electric co-op building out a broadband network in Pennsylvania. Panelist Craig Eccher, president and CEO of Tri-County Rural Electric Cooperative, Inc. in Mansfield, Penn., said the co-op is helping itself and its members and seeing private firms step up to the plate. “What I found interesting, once we launched this project three years ago, is that private companies upped their game,” he said.

There continues to be another challenge, though, which is the issue of affordability, he noted. “Some of the issues we see without broadband —the sad part, is that the education issues, 50-60 percent of students receive federally supported breakfasts,” he said. “How do you afford it even when it’s built out?”

“These kids have great infrastructure when they go to school,” he noted, “but when they go home they don’t have any connectivity. You have that in urban and suburban areas but not in rural areas.”

But Corina Lopez, vice mayor of San Leandro, Calif., said residents in her city also have issues with affordability. But the city is making inroads by offering free wifi at eight public parks, starting last fall. In some cases, the wifi is also available to homes in surrounding neighborhoods, so residents can use the free wifi, she noted. The city also partnered with Tech Exchange, an organization that refurbishes old computers and gives them away to low-income residents and helps them sign up for $10 per month internet service. They city library hosted Tech Exchange to get the word out to residents.

All of the panelists said they can help the Federal Communications Commission identify spots where broadband is needed. “We really do know what’s going on at the local level,” Lopez said. “We know our neighbors, we know what their needs are.”

“I’m looking for leadership from the federal government,” Maluchnik said.

“I’m a big fan of the TestIT app,” said moderate Christopher Ali, a media professor at the University of Virginia, referring to an app that helps measure broadband speeds. NACo has partnered with the Local Initiatives Support Corporation and the Rural Community Assistance Partnership on the app, to identify areas with low or no connectivity to help ensure adequate funding for broadband infrastructure. Find out more about the app on the NACo website here.