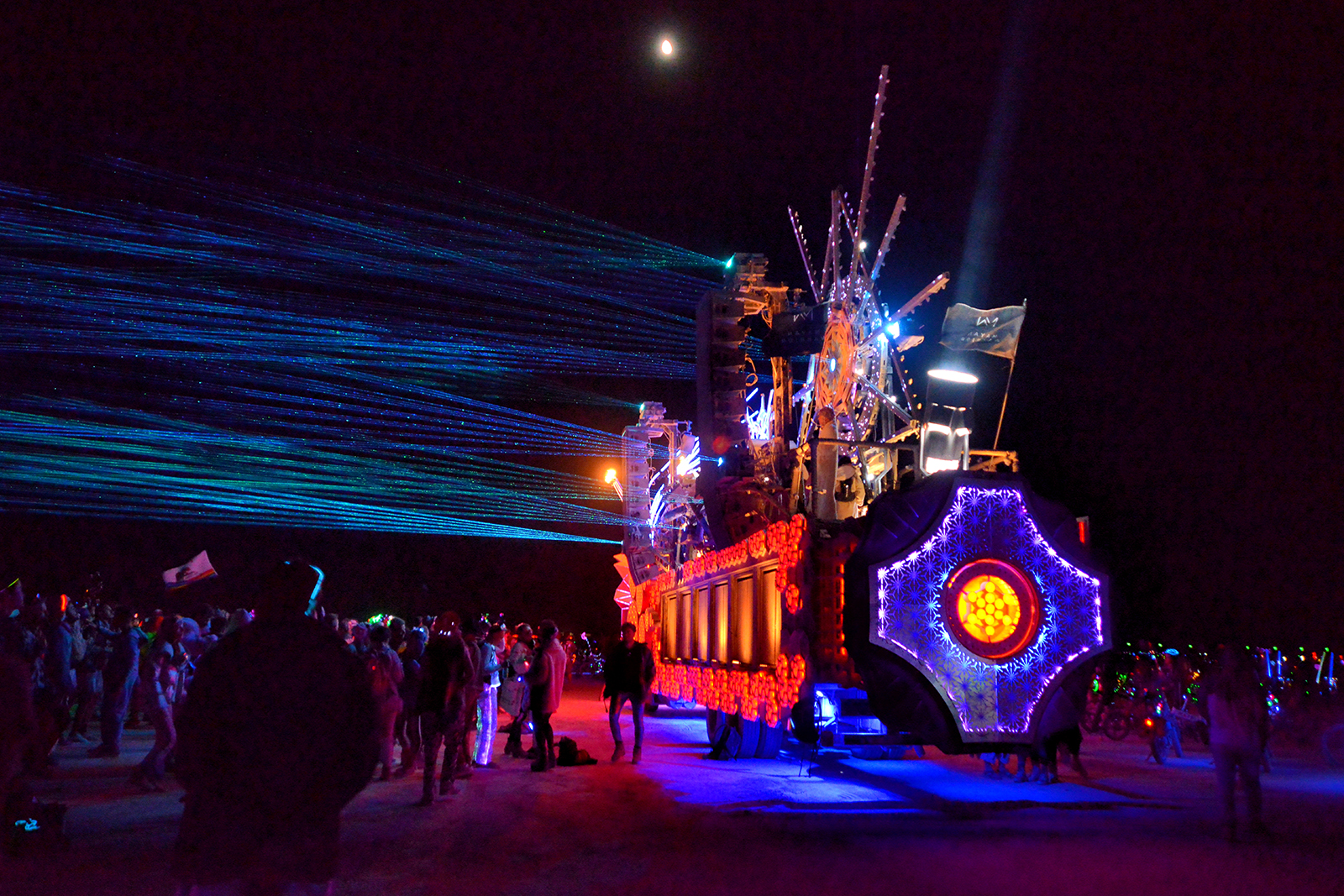 Burning Man, an annual gathering in late August, attracts thousands of artists and revelers to the Northwestern Nevada desert. The crowds entering and exiting the area pose challenges and opportunities for surrounding counties. Photo by Bryce Quayle

In order to filter by the "in queue" property, you need to add the Entityqueue: Queue relationship.
Burning Man will draw thousands of revelers to the Northwest Nevada desert, and their arrival will have various effects on Pershing, Humboldt and Washoe counties.

For a week, Pershing County, Nev. jumps up eight spots in total population for the Silver State. Up to 70,000 people will converge on the Black Rock Desert wilderness area starting Aug. 25 for Burning Man, the 33rd year of a gathering that involves the assembly and dismantling of an ersatz city on an expansive salt flat.

Though the event has evolved and gentrified from its origins as a counterculture gathering, it still operates on a series of principles that emphasize artistic expression and inclusion and features a variety of art installations, music performances, all culminating in the burning of a four-story effigy. Participants settle into a grid layout, which provides some order to chaos (and directions to emergency personnel). The event is held on a U.S. wilderness area, under Bureau of Land Management jurisdiction, but its execution involves the three northwest Nevada counties that become hosts, service providers and transportation hubs for revelers.

Though it doesn’t play host to the event, most revelers travel north from Reno through Washoe County, which ends up realizing the most tax revenue from supply purchases along the way.

“There has been more recognition of what local governments can do to participate in events like this,” said Washoe County Assistant Manager Kate Thomas. “What our role is, not only to make sure the events are successful but taking some of the principles and the ideals from the event and incorporate it back into the work we do as community builders.”

Burning Man has been solely in Black Rock Desert since 1991 and has grown steadily from 250 attendees that year to more than 51,000 in 2010, up from 43,000 a year before. That coincided with a turning point in local attitudes toward the event.

“Not that long ago, it was a giant pain for folks, and there was a lot of grumbling about the traffic and the commotion,” Thomas said. “Now there’s a turnaround, we have the art in the community from the event and locals have realized there’s a lot more to gain from the folks who come through town in offering car washes and spa days rather than fighting it.”

In Gerlach, the last permanent town before the desert, the stores fly banners “we’re your playa supplaya,” and the event has a Black Friday-scope effect on local merchants’ revenues.

“Folks are able to make their living outfitting people who come from all over the world to participate in Burning Man,” Thomas said. “Some people are buying RVs, others are buying food and supplies for a week and a lot of them have flown right into Reno, so they’re getting everything here.” After some rocky years and minor legal actions between organizer Black Rock City LLC and different surrounding counties, the event is coexisting and collaborating with local governments.

“Once a year we bring all cooperating agencies, including Washoe and Pershing counties, to meet at the Emergency Operations Center in Reno to review past operations and look ahead to the coming year, oftentimes practicing emergency response scenarios,” Burning Man spokeswoman Megan Miller wrote in an email. “Counties were deeply involved in our 10-year permitting process that recently concluded with an Environmental Impact Statement.”

Outside of the direct economic benefits, Washoe County received a $75,000 grant from the National Endowment for the Arts to create a series of art installations along the road to Black Rock Desert.

Other counties in the northwest part of the state are also participants in the Burning Man cycle, but don’t see the same payoff. Once split among Pershing, Humboldt and Washoe counties, the event now takes place entirely within the former’s boundaries, though Washoe briefly broached the topic of shifting county lines in 2018.

“The city of Lovelock (the county seat) doesn’t derive much tax revenue from the participants at Burning Man,” said Pershing County Commission Chairman Larry Rackley. “They don’t really stop here; If they’re coming from the east, they’ll stop in Fernley (in Lyon County) for groceries.”

Pershing County makes roughly $300,000 by providing 45 sheriff’s deputies for the week. Though Black Rock City has a temporary jail, offenders are eventually brought to the county jail in Lovelock for their hearings, which typically brings the jail to capacity.

“Where we get behind and where we lose money is when sheriff’s personnel have to be there before and after” the event, Rackley said. “That’s about $30,000 that the county eats every year.”

Rackley said the event organizers often have a representative at County Commission meetings, and the organizers have been active partners in the planning process.

“Our staff meet regularly with district attorneys to consult on legislation and law enforcement matters,” Burning Man spokeswoman Megan Miller wrote in an email. “Depending on the issue, Burning Man meets with county departments such as roads and health. Burning Man representatives meet year-round with sheriffs to discuss matters of concern with respect to public health and safety, from traffic management and vending operations along the highways to on-site emergency response coordination.”

Most eventgoers travel to the desert from Reno through Washoe County, but a few travel west through Humboldt County’s dirt roads.

“The heavy truckloads will turn the roads into talcum powder,” said Humboldt County Commissioner Jim French. “If we get some rain, the roads end up like gumbo. We’re usually still catching up with repairs the next year.”

Humboldt General Hospital is back on as the medical care provider for Burning Man after a few years off, and the hospital brings its $100,000 field hospital structure, along with eight extra ambulances that French said sit idle for the rest of the year.

Far removed from the commerce that Washoe County enjoys, some Pershing County residents take exception to the bohemian atmosphere at Burning Man, but Rackley said others take advantage of the county’s senior center’s day and night trips to the event. He’s gone a few times and was impressed.

“The lights are incredible, they’re really breathtaking,” he said. “I don’t go every year, but it’s always a good trip.”