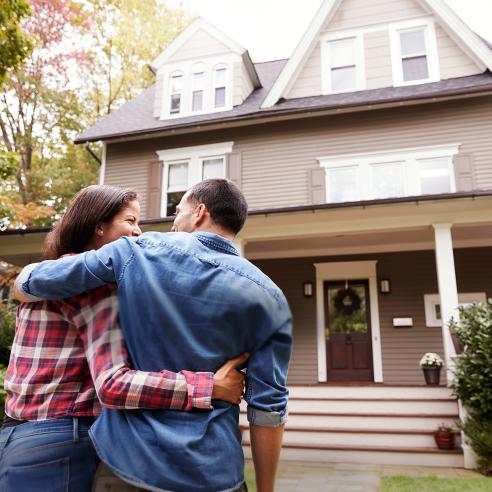 Counties of all sizes and in all regions of the country are struggling with housing affordability. In 2016, over one-third of all American households (34 percent) were burdened by housing costs, in that they spent more than 30 percent of their income on housing.1 This challenge is most pronounced in large counties, where 34 percent of homeowners with mortgages and 53 percent of renters were burdened by housing costs in 2016.2 That said, medium-sized and small counties are also struggling with housing cost burdens: half of renters in medium-sized counties, 46 percent of renters in small counties and 28 percent of homeowners with mortgages in both categories had housing costs that exceeded 30 percent of their household income.3

Although housing affordability affects counties of all sizes in every region of the U.S.,4 each county is unique, facing its own set of obstacles and equipped with its own set of tools to navigate these obstacles. This toolkit, therefore, outlines the role of counties in addressing housing affordability, the extent of the problem and a variety of county-level solutions in four major categories: (1) inter-jurisdictional partnerships; (2) funding and financing solutions; (3) planning and zoning strategies; and (4) federal resources. Finally, the toolkit includes an appendix, which discusses common housing affordability metrics, reviewing their characteristics and limitations. This toolkit summarizes and builds on research conducted by the NACo Counties Futures Lab throughout 2018.

The U.S. Department of Housing and Urban Development (HUD) categorizes households relative to the area median income (AMI) to determine whether they qualify for housing programs:

According to NACo's analysis of data from the American Community Survey, in 2016, the number of cost-burdened homeowners was lower than the number of cost-burdened renters in counties across the nation. In 2016, more than 17 million homeowners and more than 19 million renters were burdened by housing costs. This represents an increase of more than 2 million renter households from 2010.16

Map 1: Distribution of Housing Cost Burdens for Homeowners Across Counties

Map 2: Distribution of Housing Cost Burdens for Renters Across Counties 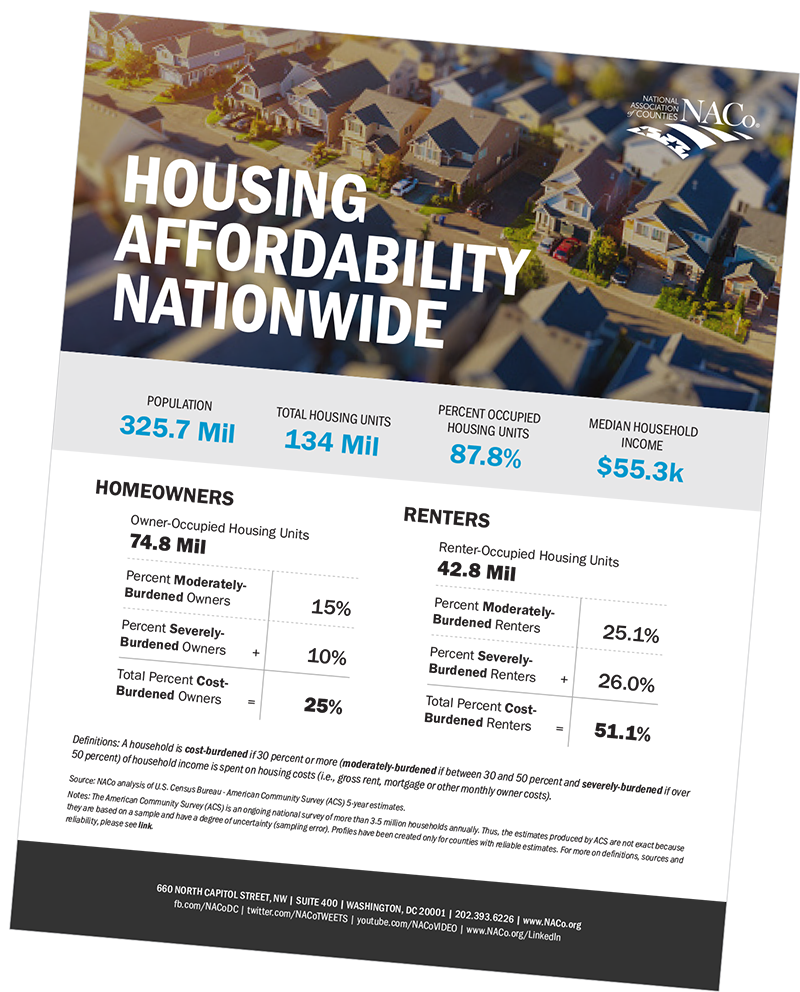 NACo’s County Explorer Housing Affordability Profiles are a compilation of selected indicators covering housing affordability challenges, housing cost burden trends, median household income, demographics and more for the 3,069 counties with county governments. Check out NACo’s County Explorer tool to find out more and compare your county across several indicators with other counties, your state, similarly sized counties or the median for the 3,069 counties.

For more information on how challenges with housing affordability are spreading across the nation, see NACo County Explorer’s Affordable Housing Profiles at www.NACo.org/CountyExplorer.

Inter-jurisdictional affordable housing programs are managed jointly between counties, cities and other governments. These programs, governed by inter-local or regional agreements, allow multiple organizations to more effectively tackle issues that expand beyond jurisdictional boundaries and authority.23 Since affordable housing is often a regional issue, inter-jurisdictional programs can have a more focused and strategic approach to by enhancing coordination, sharing information and generating additional funding resources. Over the past decade, more county governments have begun recognizing these benefits and working with other jurisdictions to create affordable housing. 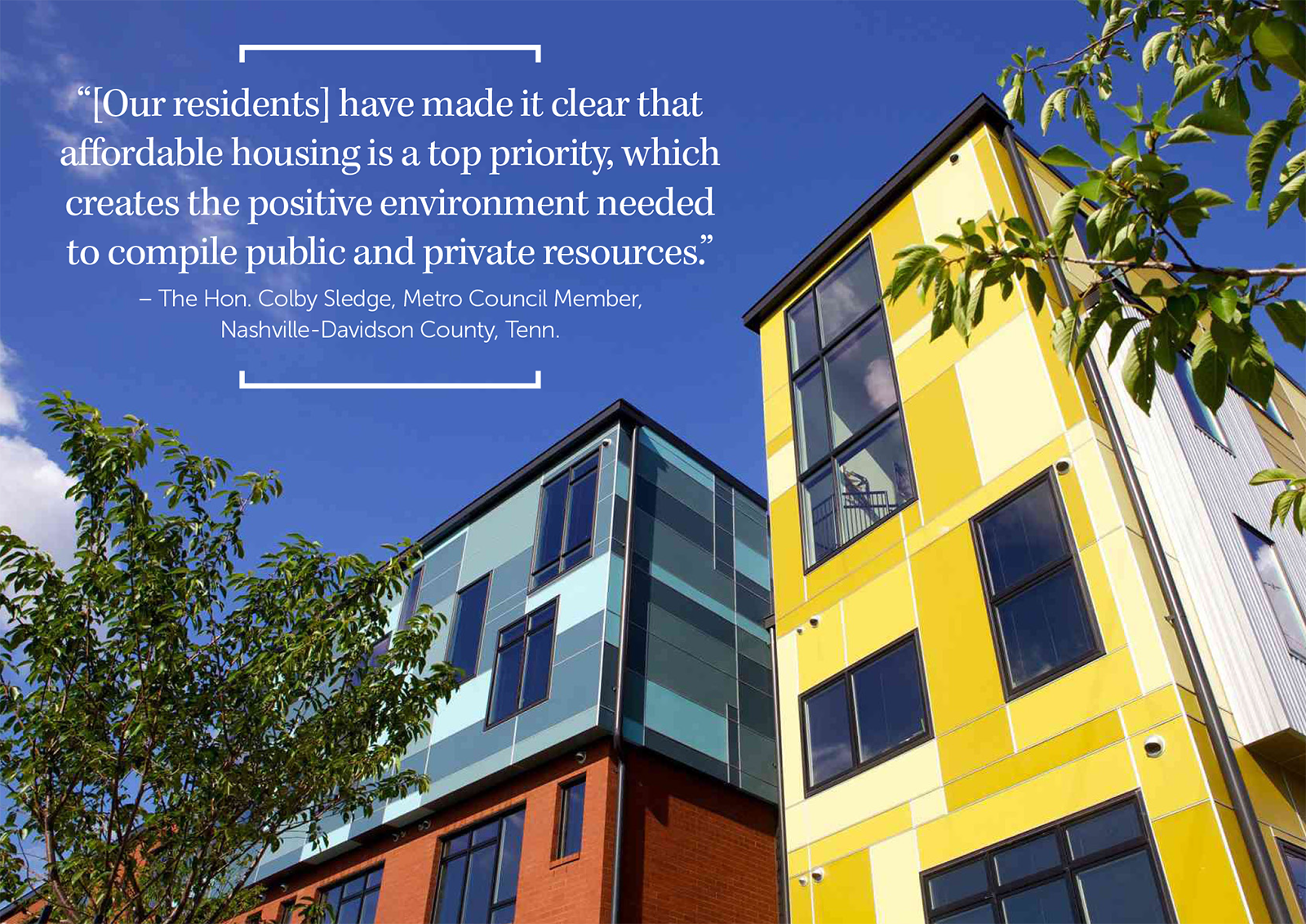 Ryman Lofts is Nashville-Davidson County’s first affordable housing development with a preference for people pursuing a career in the arts.

Decreasing federal and state funding to counties for housing and community development have impelled many counties to look for innovative local funding solutions. Depending on state statute, counties have a variety of local funding sources they can use to leverage resources for affordable housing. 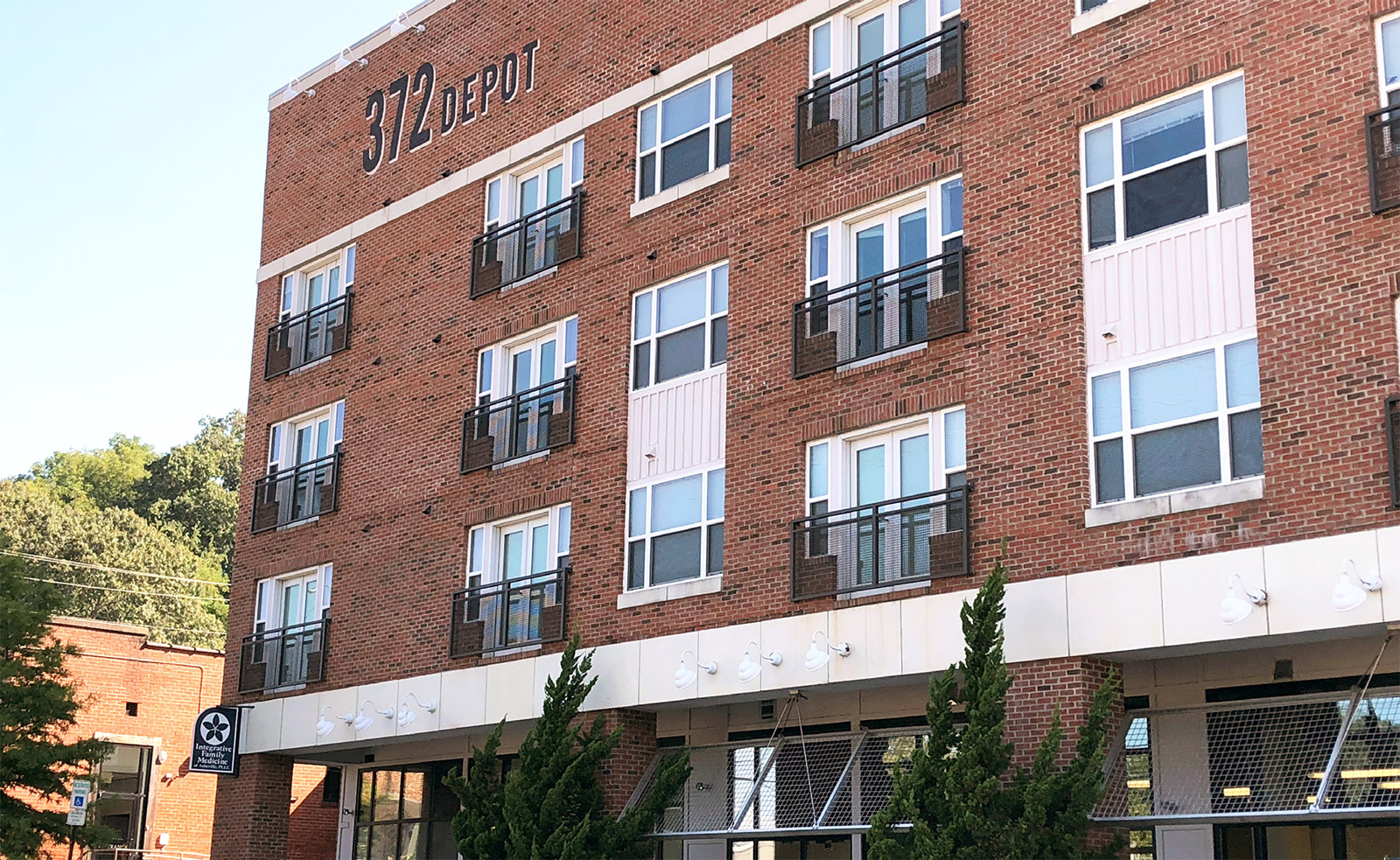 Counties have a wide range of authority over planning, zoning and permitting, depending on state law. Not all county governments are permitted to allocate funding to build affordable units or to provide monetary incentives to developers, but many can use their authority over planning, zoning and permitting to incentivize affordable housing development without contributing much funding of their own.

The National Association of Counties (NACo) advocates for policies at the federal, state, and local level that strengthen county governments. NACo members vet and adopt legislative policy compiled in a document known as “the American County Platform.” Policy Steering Committees, comprised of NACo members, develop and propose policies and resolutions for consideration to be added to the platform. Each year, NACo members vote on and approve each policy steering committee’s recommendations that are added to the platform. The Community, Economic and Workforce Development Policy Steering Committee has jurisdiction on housing issues and is responsible for proposing ideas to NACo members that will promote affordability.33

The 2018-2019 platform reflects many housing-related items that are important to NACo members.34 Members support flexibility in administration and increased funding for the Community Development Block Grant (CDBG) Program that will allow federal, state and local priorities to be met. The platform emphasizes the need for affordable, workforce and entry-level housing, as well as more federal funding to support county efforts to comply with increased administrative requirements, such as the updated Affirmatively Furthering Fair Housing rule. Recommendations outline the roles state and county governments can adopt to better finance affordable housing programs. The platform also urges the federal government to allow stable long-term coordination and funding between federal, state and local governments to better promote affordability. In response to these priorities, NACo developed several resources on federal affordable housing programs.

The standard method for measuring housing affordability is the housing cost-to-income ratio approach, also known as the “30 percent of income rule.” This approach assesses housing costs as a percentage of the household income, designating households that spend more than 30 percent of their income on housing costs alone as cost burdened. The underlying notion of this approach is that a household’s income must cover all necessities, and that cost-burdened households must make tradeoffs between housing and other necessities. As a result of spending more on housing, these households may not have enough left to meet their other needs.

Although the housing cost-to-income ratio approach has been widely adopted in academic and public policy circles, some researchers have criticized the use and validity of this traditional measure in the current housing market, namely because of variations in non-housing costs across different income levels. According to the Harvard University Joint Center for Housing Studies, the costs of necessities generally do not rise with income, so high-income households can devote a larger share of their income to housing and still meet their other needs than can low-income households.35 For example, a household that earns $650,000 annually may be able to spend 50 percent of their income or more on housing and still have enough for other necessities, while a household that earns $30,000 annually may not have that same luxury.

Another criticism of the housing cost-to-income ratio approach is that it does not take into account that different households earning similar annual incomes may have different needs. For example, households with children spend more on clothing, food, and medical bills in comparison to households with single adults.36 Thus, a household with children that spends more than 30 percent of its income on housing might be cost burdened, whereas a single adult who earns the same salary and spends the same percentage of income on housing might not be. Furthermore, the housing cost-to-income ratio approach does not consider cost-of-living differences between areas and regions of the country. For instance, a family in Los Angeles County (Calif.) that earns $30,000 annually and spends 40 percent of its income on rent may not have enough left to cover all other basic needs such as food, health care and transportation, while that income level may be sufficient for a family in a county with a lower cost of living.

Researchers can obtain data on housing affordability from various sources. The HUD Office of Policy Development and Research lists numerous datasets that can facilitate housing affordability research. HUD provides a Housing Affordability Data System (HADS) of housing-unit level datasets which measure the affordability of housing units and the housing cost burdens of households relative to AMIs, poverty levels and Fair Market Rents. HADS contains data from the American Housing Survey (AHS) – a survey conducted by the U.S. Census Bureau every two years which contains a wide range of housing information, such as housing inventory, vacancies, physical condition of housing units, characteristics of occupants, neighborhood quality and other variables that impact affordability.

Please explore the following compilation of resources below to learn more about the strategies that counties are using and can leverage to address affordable housing.