A year after the Camp Fire, rebuilding remains a challenge 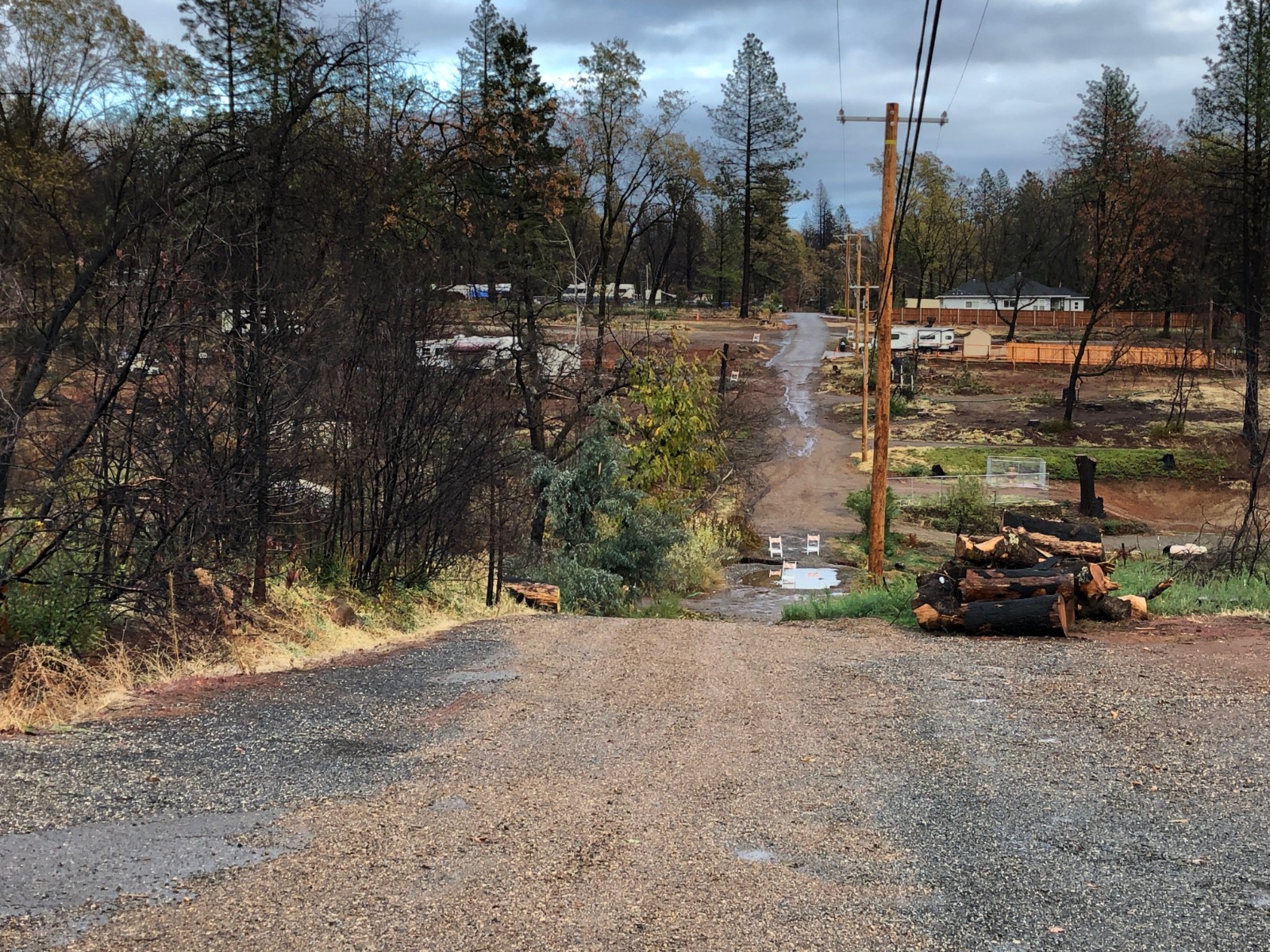 In order to filter by the "in queue" property, you need to add the Entityqueue: Queue relationship.
More than a year after the Camp Fire, Butte County is seeing complications in rebuilding, housing costs, traffic and more

Nearly every step Butte County, Calif. takes in recovering from the Camp Fire means stepping on a splinter. Up close, they are the charred, dead trees the flames left behind.

As of Dec. 4, 2019, roughly 55 weeks after the Nov. 8, 2018 fire that killed 85 people and destroyed more than 18,000 buildings, only 24 homes were rebuilt within the burn area, with 742 building permit applications issued. Nearly three-quarters of rebuilt homes and permits are in the town of Paradise, where 95 percent of buildings were damaged or destroyed.

“What saddens me is when you look at Sonoma County and only 30 percent have rebuilt after two years (following the 2017 Tubbs Fire),” said Supervisor Doug Teeter, whose district includes Paradise and the unincorporated part of the county, Magalia, which was also burned. That’s kind of sad because that community is so much closer to jobs and higher density communities, you’d think people would just clamor to rebuild there. We’re quite far even from Sacramento, so it’s going to be tougher for us.”

Teeter narrowly escaped the fire himself and sees those trees as one of several roadblocks in rebuilding efforts that has consequences for the rest of the county and a harbinger of fires yet to come.

“I can’t say there’s one single issue that is holding up rebuilding,” he said. “Some of it is clearing what is left, some of it is the massive cost to rebuild, some of it is hesitance — whether or not people want to come back.”

“There are so many dead trees,” he said, before even addressing the trees that would fall on private property. “Even if people have had theirs removed, they might not have control over their neighbor’s property, and they don’t want to rebuild because this tree could potentially fall on their property.”

On top of that, the presence of heavy machinery on county roads is preventing serious investment in repairing the county’s thoroughfares until they won’t be taking sustained abuse.

The state-coordinated debris removal is nearly complete, and Butte County and Paradise have passed ordinances requiring the removal of trees on private property that could fall onto public roads. Those that don’t threaten public infrastructure, though, are not yet eligible for FEMA reimbursement, and the cost is roughly $2,000 each to remove.

“The cost to rebuild is ridiculous and it’s pretty limiting for most folks,” Teeter said. “I’m curious if people lost their jobs and homes, are they going to move back to Paradise? I think the longer they’re gone, the more likely they are not going to come back.”

The threat of trees

Teeter isn’t going anywhere. He literally wasn’t going anywhere on Nov. 8, 2018, either. Shortly after his wife returned from dropping their daughters off at school, they heard the evacuation order — the fourth since they moved to Paradise in 2005. She went on ahead while he talked with neighbors.

“She maybe got out 10 minutes before I left, but a quarter-mile down the road, it was bumper-to-bumper,” Teeter said. “You think… this might be it.” Shortly after that, the flames appeared. He abandoned his car and caught a ride with an off-duty Cal Fire employee and they had to bail out of the road into a nearby field, directing others to come with them.

“I had seen a guy mowing the grass here all the time, the field has to be about 200 feet in diameter,” Teeter said. “I always wondered why he did that.”

That mowing probably saved Teeter’s life, along with the others who joined him. Now Teeter looks at potential fuels as immediate threats.

“My friend in the Army Corps of Engineers talks about ‘flood amnesia,’ when people rebuild in a flood plain thinking it won’t happen again,” Teeter said. “I think we might have to fight ‘fire amnesia.’ It seems like people move to the woods because they want the woods and they let it grow back, but my takeaway, making it a quarter mile away from my house, is that we need evacuation routes to have wide, cleared areas so cars don’t burn up in the middle of the road.”

That’s complicated by the narrow rights-of-way with county roads and the cost of private property along those roads, plus the maintenance costs to keep the right-of-way clear.

“Everyone wants this forested utopia, but the new normal is higher winds, and a longer fire season and that can equate to a super-fast-moving fire,” he said. “If you don’t remove the fuels next to the roads, you’re going to have people die in their cars trying to get out.”

Where they are now

Chico gained the distinction of being the fastest-growing city in California in 2018 by virtue of its location. Just eight miles from Paradise, it was the destination for most of the 50,000 fire evacuees and has become a temporary home for up to 20,000 displaced residents.

Like the extra water that flows downhill via the Camp Fire burn scars and floods the lower-lying areas, the fire affects more than just Paradise and Magalia.

Supervisor Deborah Lucero said Chico, in her district, has seen a 77 percent increase in traffic since the fire. Property values, too, have jumped.

That is problematic for many of the displaced residents, of which about one-third were renters and one-quarter were 65 years and older. Roughly a quarter of Chico’s workforce lived in Paradise.

“A lot of these people were living in houses they built in the 70s,” she said. “It was one of the more affordable places to live. Now they’re pushed into an area that had seen rapidly inflating housing prices. It’s wearing on people.”

Teeter sees a lot of variation among his constituents. He sees doctors living in RVs, and others with even less. He lost his home, his wife’s business and several rental properties, though all were insured.

Those people have largely ended up in non-congregate shelters, and the county has played a role in serving as a safety net providing shelter. The state parks system turned over the Lake Oroville campground to the county to serve as an RV park, with the county providing water service and wastewater pumping. The county also provides a security guard for the camp.

Pacific Gas and Energy turned over a “day use” area to serve as a campground.

The fire has dominated Teeter’s life, both as a homeowner and a county supervisor.

“Our role is as much as you make it,” he said. “We can do nothing or we could do a lot. I spend so much of my time either attending meetings trying to take in as much information as I can or presenting what I know to other meetings. It was all consuming.

“The community was just dying for information, and due to social media, there was a lot of misinformation. I wanted to be someone that people knew they could rely on.”

By doing so, Teeter could grease the wheels of rebuilding progress by getting as many people informed about the right-of-entry paperwork to remove debris. He also just tried to internalize as much as he could.

“I hung out in the EOC, making sure I had a grasp of what was going on with all the departments and agencies,” he said. “You go to a lot of meetings as a supervisor but after an event of this magnitude, it seemed like every day you were switching gears to tackle another topic. I’m still hesitant to say I have a handle on it.”

He said there’s some clamoring from residents about how insurance companies will handle policy renewals.

“There are a lot of things out of control by government that folks want government to control,” he said.

Butte County itself will receive $252 million to resolve claims against Pacific Gas and Electricity, which owned the faulty power line that started the fire and has now filed for bankruptcy.

One thing Teeter could control was the excavator that cleared the remains of his and his mother’s houses. Both were built by his grandfather.

“It was closure for me to tear out my grandfather’s work,” he said.