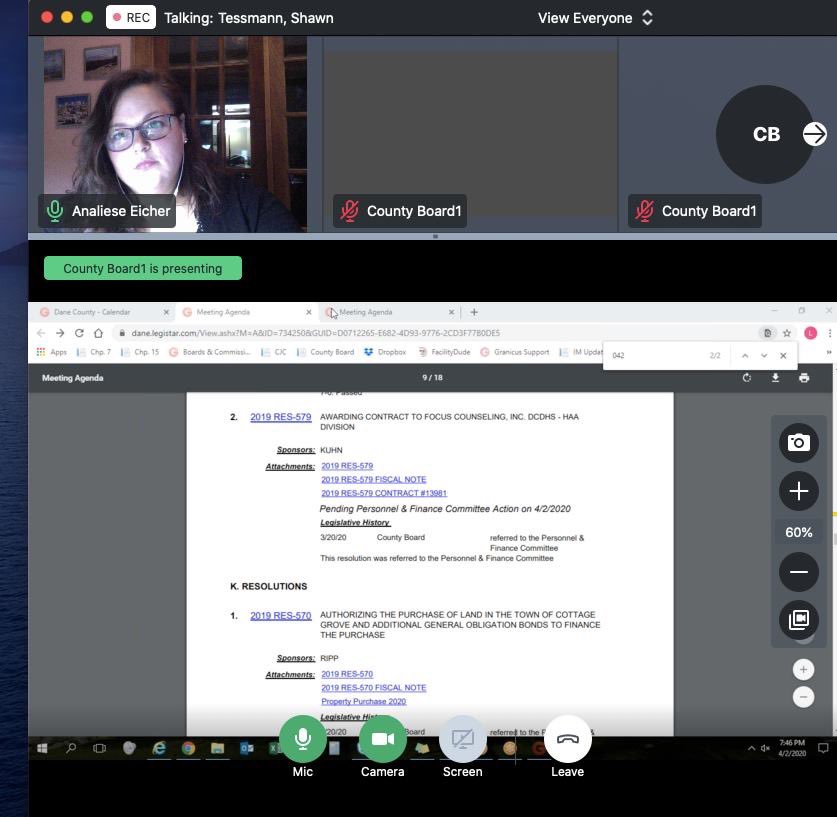 As counties manage, mitigate and treat the COVID-19 pandemic, their boards are seeing a bright spot: The glowing computer screen on which they are conducting their meetings.

With in-person meetings largely impossible because of physical distancing requirements (and ill-advised beside the point), boards are taking meetings online, and finding a lot to like despite the transition. Most states’ emergency declarations or stay-at-home orders allow for public meetings to be made available, along with public participation options, elsewhere.

“I hope that we would still be able to use this in the future,” said Shelly Pinkelman, chair of the Crawford County, Mich. Board of Commissioners. “I think the meetings are more streamlined, there’s more efficiency in not breaking in, when motions are being made, which people are supporting them.

“I feel like there have been alot more constructive comments, too.”

That’s a feature Orange County, Va. Board of Supervisors Chair Jim Crozier sees virtual meetings improving. The Board will accept comments and questions for two weeks prior to the next public hearing, and a staff member will ask the question during the meeting.

“When you’re at a public meeting, it takes a little while to digest an individual’s questions and figure out what exactly they’re looking for, so it helps us prepare our answers a little more,” Crozier said. “We’re here to serve the citizens, and we don’t usually get the interaction that we hope to get, so this may improve that, by making it easier for them to participate.”

As for basic execution of the meeting, Crozier was impressed.

“It’s a little different because you’re not all sitting next to each other, but it’s an extremely efficient way to run a meeting,” he said. “You don’t get the normal chatter you do, things run smoothly.”

Don Batchelder saw the same results in Ouray County, Colo., where he is chair of the Board of Commissioners, when they held their first virtual meeting.

“We had more public participation than we do generally,” he said. “People are more conscientious about being clear and concise as opposed to rambling on.”

Branch County, N.C. Administrator Bud Norman advised counties not to attempt to achieve total proficiency before holding a virtual meeting, but rather to try it and work out the bugs as you move along. “Know that you’ll get better each time you use it,” he said. “Accept that mistakes may happen with first time use but you can’t correct those mistakes if you don’t formally use it.”

The Dane County, Wis. Board of Supervisors wouldn’t be able to meet in one place without the public anyway — it has 37 members. All logged in for their first meeting, most via the iPads they were issued earlier.

“It worked well because we did a lot of groundwork beforehand, we established procedures, rules of etiquette and ways to make sure people are recognized,” said Board Chair Analiese Eicher. “We work a lot like a state legislature, with most of our work being done in committees, but even they are too large to have in one room together.”

At 31, Eicher is the youngest board chair in Wisconsin, and being a “digital native” has given her the background to help her lead the transition.

“Folks were nervous at first, but a lot of that apprehension was lifted after we did a training session,” she said. “There was a learning curve from some of the older members, but they embraced it. The meeting itself didn’t feel too different from normal, but I’m used to being in virtual meetings all the time.”

Many counties are using Zoom to conduct the meetings, then broadcasting the video and audio on YouTube, Facebook or both. Tehama County, Calif. uses an audio-only stream.

Connectivity can be an issue where broadband internet service isn’t available.

“Even though we’re 60 miles from the nation’s capital, we have very poor internet service,” said Orange County, Va.’s Crozier.

It was rougher for Ouray County in Colorado — Batchelder reported that the commission lost power for about six minutes during its most recent meeting.

“Depending on where in the county people are calling from, internet service is spotty, so you can be knocked off, but that usually lasts about 10 seconds,” he said. “Everyone has the phone-in number. It’s still a much better alternative than holding large meetings with lots of people.”

Even when the board holds meetings in person again, Crozier sees opportunities for time savings.

“We can make staff reports more efficient, do it from their office rather than sitting around waiting to be called on in our meeting room,” he said. “That’s just wasting their time. And if we have a light agenda, we might be able to take care of it virtually and not have to drive 40 minutes each way.”

Orange County’s new public safety building will house its board room, and plans are to make it as technologically advanced as possible to serve needs like this.

With the entire Dane County Board (ostensibly) up for reelection April 7, the county had offered virtual meeting tutorials to all candidates on the ballot.

“How do we orient and swear in new board members when we can’t be doing this in person?” Eicher said. “It’s an interesting challenge. I’m up to it and my fellow board members are up to it.”

Eicher said the board has had to limit itself to essential business, putting off recognitions and celebrations until it can meet again in person.

While she is looking forward to that, Eicher expects this to be her county’s standard operating procedure for the foreseeable future, but that alone was a step up from days of telephone calls leading up to the board’s first meeting.

“It was good to see people’s faces after a few weeks,” she said.

· Test the software program before your meetings and become familiar with differences between programs: GoToMeeting, GoToWebinar, Zoom, WebEx.

· Use video, if possible, to keep people’s attention.

· Have an agenda and script that include when presenters will need control and when to unmute attendees for questions and comments.

1. Ask users to mute from their end, if possible.

2. Explain the agenda and chat/question options to attendees.

3. Ask speakers to announce themselves before speaking. (You can ask this of members of public who decide to speak at public comment portion, just as you would in a regular meeting.)