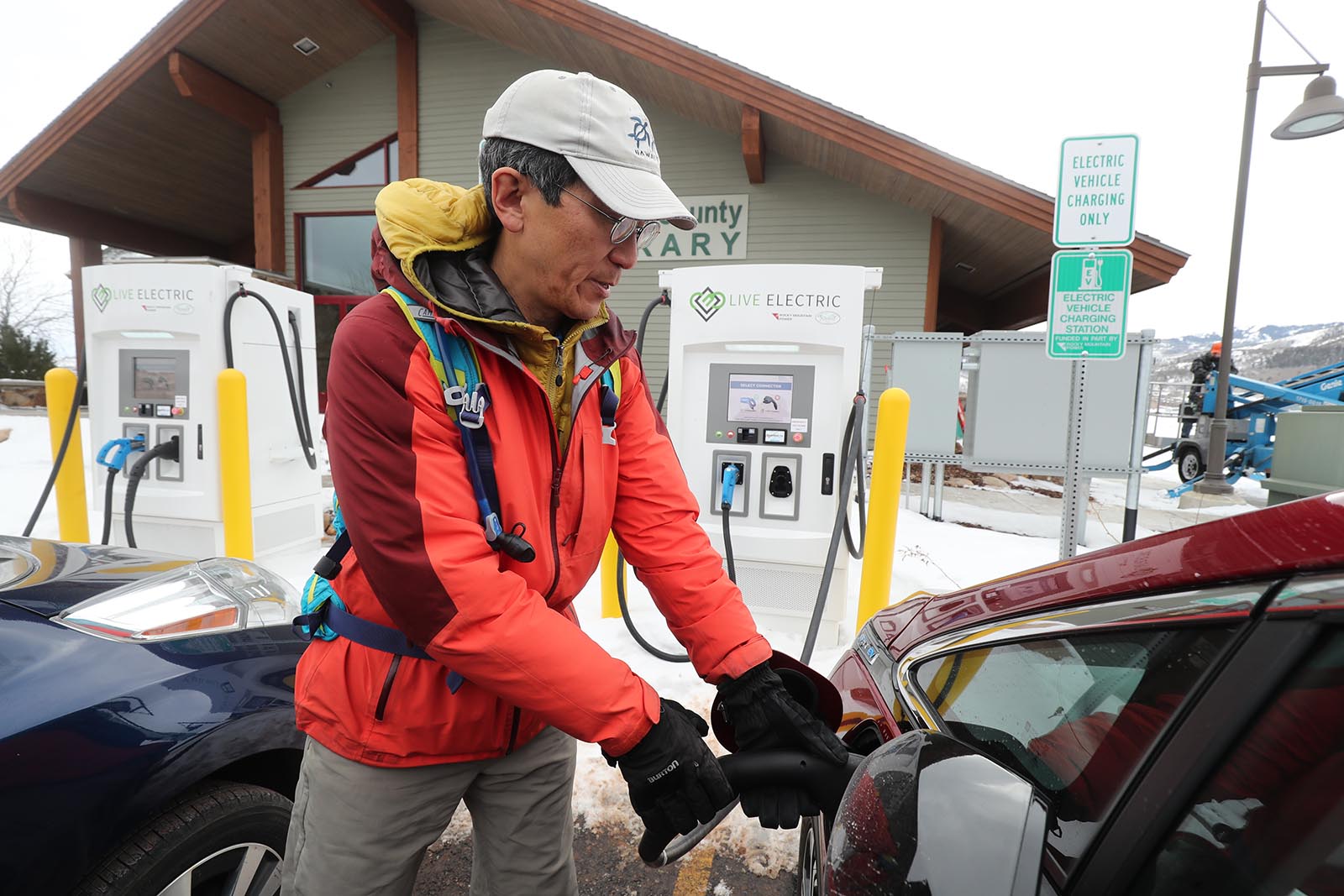 A man charges his car outside the Summit County Library at an electric vehicle charging station. Photo courtesy of Summit County

In order to filter by the "in queue" property, you need to add the Entityqueue: Queue relationship.
Summit County, Utah aims to achieve 100 percent net renewable electrical energy by 2032 and that got a boost from the state's Community Renewable Energy Act

The grass is looking greener in Summit County, Utah where the governor recently signed a bill that will help the county achieve environmentally sustainable goals and reduce greenhouse gas emissions.

In 2017, Summit County created an environmental stewardship program to set a goal of reaching 100 percent net renewable electrical energy by 2032.

As part of the stewardship program, the county has worked to incorporate electric buses, electric bikes (all county bikes have an electric pedal-assist to help with hills and make commuting easier) and purchase vehicle-charging stations and electric vehicles for the county fleet.

In continued efforts to reduce greenhouse gas emissions, the county has also enhanced recycling and made transit options more available so residents do not have to drive to work.

The program’s primary functions are to integrate county departments — such as planning, transportation, housing and economic development — on these goals and to serve as a communication tool for discussions on creating sustainable environments.

“Everybody has a piece of the pie,” said Lisa Yoder, Summit County’s sustainability program manager. “It was also a way to announce and keep track of successes and progress along the way ...[to see what] ... each department is doing.”

In regard to sustainability, Yoder said long-term decisions must be made even if it requires an initial investment. She said in the past, decisions were made based on whether money was available that year.

“We can’t just make decisions based on short-term economics,” she said. “We have to look at life-cycle costs of operating much more efficient buildings that lower their ongoing operating costs forever and that takes a little investment upfront, but the reduced costs every single year is what needs to be considered.”

The program aims to reach 100 percent net renewable electrical energy by 2032.  To accomplish this, a qualified utility company needs to provide electric service from renewable energy resources to a participating customer within a participating community. Customers of a qualified utility may then be served by the community renewable energy program. Once communities adopt resolutions, the utility finds the cost for acquiring renewable electricity. If the price is right, communities can adopt an ordinance to be 100 percent renewable.

This process was described in Utah’s House Bill 411, also known as the Community Renewable Energy Act, which the Utah legislature passed March 14, in the final 30 minutes on the last day of their 45-day 2019 legislative season. The Senate passed the measure 23 to 6 and the House voted 48 to 24 on the bill. Utah Gov. Gary Herbert (R) signed the bill into law March 29.

“This legislation was really a keystone to getting a lot of our sustainability goals moving,” said Summit County Council Member Glenn Wright.

The bill allows other communities to share the same goal of having 100 percent net renewable electrical energy, but by 2030 instead of 2032. It includes an opt-out period for customers to leave the renewable energy program without penalty.

Existing customers of the qualified utility may elect not to participate in the program and continue to pay existing rates.

He described the environmental sustainability program as what pushed the bill to be brought onto the floor.

“You can’t just turn that switch on overnight. Really, the vital link to get started in an aggressive program like that is to have access to the 100 percent renewable electrical energy,” Wright said. “Without the bill, nothing will happen because what the bill did is it authorized the Public Service Commission to come up with this separate rate for renewable energy.”

Yoder said the idea behind the program and the bill is to allow customers an open market to get renewables at a good rate.

“It makes renewable energy a standard offer from the utilities,” Yoder said.

The most productive way for the county to achieve another one of their goals, reducing greenhouse gas emissions from county operations 80 percent by 2040, is to switch to renewable energy, Yoder said.

Switching to renewable energy will lower the overall county operations emissions by 30 percent. She added the county may be buying 100 percent net renewable electrical energy as soon as 2020 for county-operated buildings.

“I think Summit County is getting a lot done, kind of leading the nation in what counties can do for their residents,” Yoder said.

The next step will involve detailed negotiations with Rocky Mountain Power on the rate structure with a proposal planned for the end of 2019.

“I think this is a first step in a process in Utah where the state will become a much more environmentally conscious state where more and more communities will sign onto these kind of sustainability goals,” Wright said.

The Summit County Environmental Stewardship Program was named Best in Category for county resiliency: infrastructure, energy and sustainability in the 2018 NACo Achievement Awards.