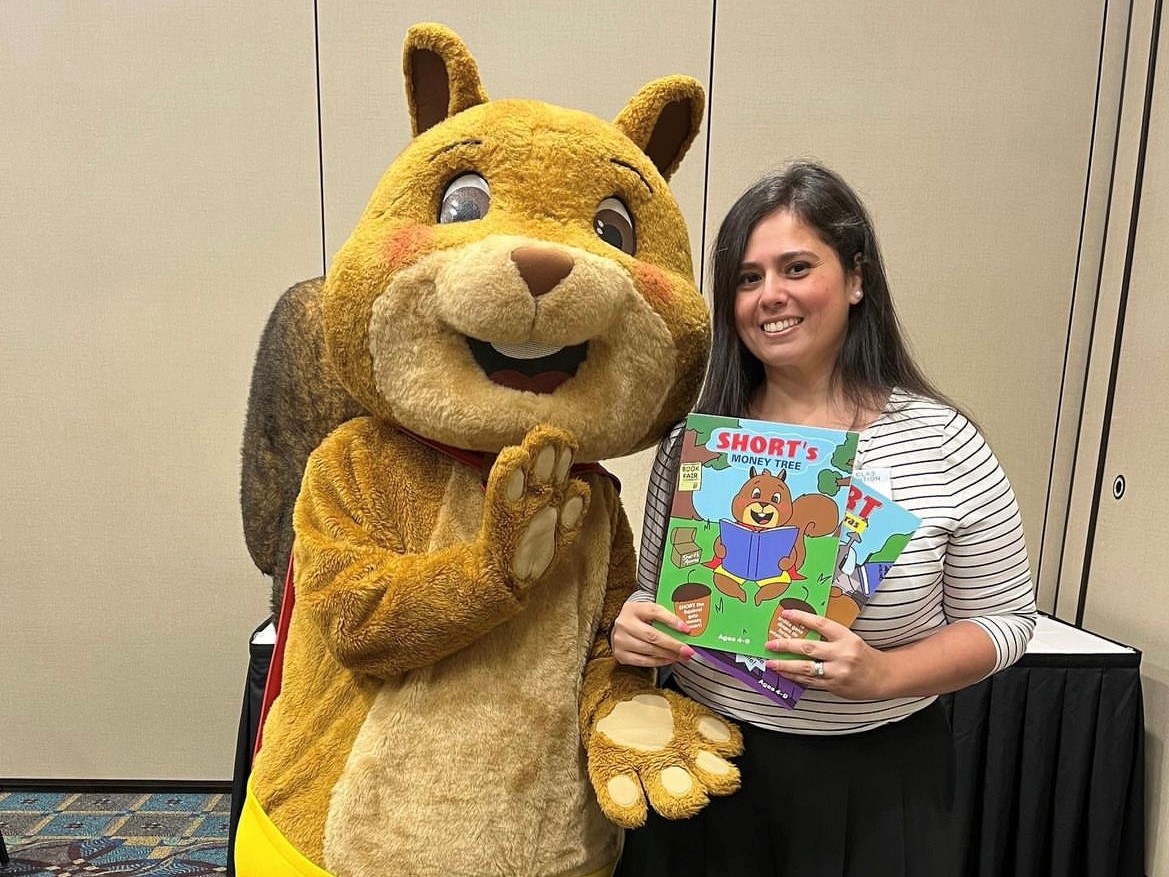 Estela Tirado, who serves on SHORT’s advisory board, pauses for a photo with SHORT, the mascot for a successful literacy program in Alabama.

A literacy program called SHORT the Squirrel is helping educate children in Alabama counties on topics ranging from recycling to the state’s judicial system.

The goal is to help children read. Earlier this year, Alabama State Superintendent Eric Mackey said 22 percent of 3rd-graders statewide were at risk of being held back based on reading scores on the Alabama Comprehensive Assessment Program.

The literacy program is run by Monica Anderson Young and Dee Dupree Bennett, who have been friends since college. The idea came from Young’s daughter McRae Young, a Mobile County assistant district attorney, telling her mother that many children who came to court didn’t have materials to occupy themselves and are not allowed to bring electronic devices to the courtroom.

“These are the invisible kids in the courthouse — kids who testify, who are victims, who are in custody cases — there are a lot of kids that go in with adults who don’t have babysitters who sit there,” Monica Anderson Young said.

Young spoke to Bennett about the issue and the two of them saw an educational opportunity for children, which led to creating an interactive booklet on Alabama’s court system that included counting activities, mazes, literacy-building activities and age-appropriate explanations of courthouses.

The program was created in February 2020 and “SHORT in Court,” which was distributed in all of the state’s courts through the DA’s office, was released in March 2021.

SHORT has since expanded into a whole series including “SHORT Gets Sick,” “SHORT Recycles,” “SHORT’S Money Tree” and “SHORT’S Feelings,” among others, through partnerships with Birmingham’s Children’s Hospital ER, Troy City Schools, Alabama’s Securities Commission and Alabama’s Department of Mental Health, respectively.

“We recognized that kids are waiting in a lot of places and so our tagline became ‘turning waiting time into reading time,’” Young said.

“When we did ‘SHORT Gets Sick,’ we found out that we could not bind the books with staples because of all the children who were there for mental health reasons, and we were like, ‘Oh my gosh, we’ve got to do something on this topic.’”

“SHORT’S Feelings” launched this summer and aims to educate children and their parents on mental health and identifying emotions.

Young and Bennett write all of the SHORT booklets themselves but enlist the help of specialists and local educators to create the best content possible, Young said.

“All of our stuff is highly researched –– Dee and I are not the experts in these fields, so we find experts who help us put these together,” Young said. “And we have them make sure that what we’ve laid out is what they had in mind too, if they’re our grant sponsor. For example, for ‘SHORT’s Money’ … [ASC] gave us the information and we turned it into content for a four-to nine-year old, an emerging reader.

“And then after we do that, the next step of our process is we take it to a circle of educators —it’s a different group every time so that we make sure we’re not getting stale or somebody has an unconscious bias because they’ve seen a prior book and helped on it — to get their input on, ‘Did we hit this? Did we miss something? Are we okay?’”

Young sees the program as more of a community support system than a curriculum, she said.

“Anywhere a child might be in the community, we want them to be able to see SHORT kits all over,” she said. “If a child is on a boat and the state troopers pull them over to check their safety features, which happens all the time down around where I live, then I want the state trooper to say, ‘Hey, here’s a literacy kit for you –– here’s a SHORT the Squirrel kit for you,’ and it’s ‘SHORT on the Water.’ So, distribution is the community as a whole, and we want the whole community to really foster a sense of shared responsibility for literacy.”

Pike County and Montgomery County have been particularly supportive of the program through funding and spreading awareness of it, Young said.

Montgomery County Commissioner Ronda Walker said that she heard about the program and immediately knew it was something that she wanted to implement in the county. She helped the program get its first mascot suit and Alabama Gov. Kay Ivey has since endorsed SHORT as Alabama’s literary mascot.

“Part of the magic of what they’re doing –– everybody loves a mascot –– and this little squirrel mascot is captivating to adults and children alike,” Walker said.

“I have seen SHORT in schools and the kids are crazy about it. It brings it to life. It’s more than just an adult standing up there holding a book.”

Walker also got the county’s commission on board financially and reached out to Sonny Brasfield, executive director of the Association of County Commissions of Alabama, to have SHORT present at the association’s annual conference.

“Literacy is critical, especially in light of the past couple of years, how students have suffered under not being able to go to school, not having the typical routines,” Walker said.

“I work with a lot of nonprofits, a lot of groups and organizations –– I have never encountered two people [Young and Bennett] who are more passionate and hardworking.”

Montgomery County was also the location of SHORT’s first virtual birthday party, which is an event the program puts on its YouTube channel for children and classrooms across the state to get engaged with SHORT. In its first year, 30,000 Alabama children watched the virtual birthday party and 35,000 watched it the second year.

The program’s third birthday will also be SHORT’s Reading Blast Off and will take place in February 2023 at Huntsville, Alabama’s U.S. Space and Rocket Center, which they coordinated with Madison County officials to make possible.

While the initiative doesn’t have any plans to take SHORT on the road outside of Alabama at the moment, Young said the materials, along with the program’s YouTube videos and class lesson plans, are open to anyone who wants to use them and she encourages people to do so.

Along with 45 other states across the country, Alabama’s second most commonly spoken language is Spanish. All of the SHORT booklets are produced in English and Spanish to make it accessible to a wider demographic of children and their parents.

Estela Tirado is on SHORT’S advisory board and serves as the community advisor, in which she translates the booklets in a way that is approachable and meaningful for the Spanish speaking population, she said.

“I work in the education space, mainly with Hispanic and Latin American families here in Alabama, so for me, it’s super important that kids in this area have material that is appropriate for them to be reading and learning but also that is appealing to the parents,” Tirado said.

The Alabama Literacy Act went into effect in the 2021-2022 school year and was created to ensure students are reading on grade level by the end of the 3rd grade.

If students don’t demonstrate sufficient reading skills through the Alabama Comprehensive Assessment Program English Language Arts assessment, they may not advance on to 4th grade.

“Their brain is developing in a different way because they’re capturing two languages. So, for me, it’s super important to make sure that kids have materials that are appealing, that are useful for them to be learning to read and to explore their language development.”

SHORT runs as a non-profit and Young and Bennett, along with the program’s advisory board members, contribute time and effort outside of their day jobs into the initiative because it’s a cause they’re passionate about. Young said that whenever there’s a particularly hard day or if she gets discouraged because the program doesn’t receive a grant it applied for, she’ll look at a photograph taken of a young boy with SHORT and remember why it’s worth it.

“We went to a community on the Alabama-Mississippi border –– it’s just south of Selma –– and this little boy, probably about six years old, sees SHORT and he comes running … he grabs SHORT around the belly, almost knocks him over, and he looks up at him and goes ‘SHORT! I saw your birthday video and I’ve been reading every night just like you told me to,’” Young said.

“And Dee and I looked at each other and were like, ‘That’s why we’re doing this.’”