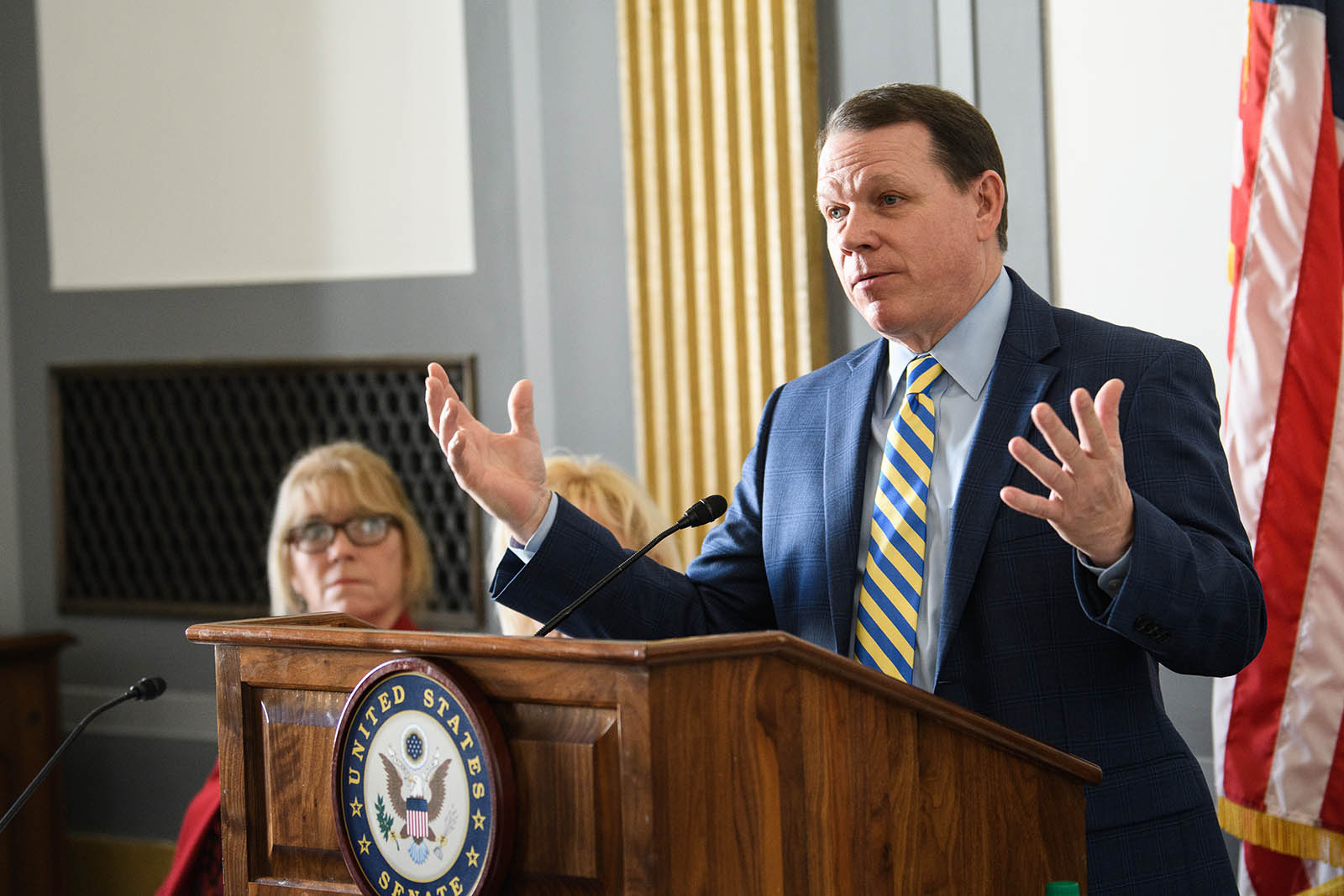 The bridge collapse over I-85 in Georgia in 2017 still resonates in Liz Hausmann’s ears.

“It pretty much crippled us,” the Fulton County, Ga. commissioner told the audience at a March 3 Capitol Hill briefing on transportation infrastructure funding. “We had limited access from our most populated area into downtown Atlanta, so it really highlighted the issues we face not only with normal congestion but with the lack of transit services.”

The state’s gas tax is now an excise tax, but there is no funding for a transit system in the 13-county metro Atlanta area, despite the counties working together on a plan.

“It’s come together into a $27 billion plan to address the transit needs,” she said. “The problem is, we don’t have $27 billion.”

The current rail system is financed by three counties’ penny sales tax, but there are no plans to expand that.

“As a Fulton County commissioner, I can raise that tax, and I can build that system out to my county line, but that’s where my authority level stops,” she said. “We have a big problem that falls to the locals to fund, the state doesn’t participate too much, but it’s very important the federal partners recognize that our limitations really do not allow for a regional solution.”

As the surface transportation act, the FAST Act, approaches its September expiration, counties are urging Congress to take action.

“We have a problem that I cannot fix,” Hausmann said.

Rep. Sam Graves (R-Mo.), ranking member of the House Transportation and Infrastructure Committee, expressed his confidence that his committee would get a surface transportation bill done.

“What we have to worry about more than anything else is leadership,” he said. “The committee will continue to work on transportation reauthorization, but we have to worry ...that leadership will stop or at least postpone it until after the election.”

Now that both parties have put out their statements of principles, “the easy stuff is finding the common ground,” he said. “We should be able to come up with a pretty decent bill. We want to give states flexibility, we need to deal with long-term sustainability of the highway trust fund, and we want to make sure rural communities are taken care of.”

The big question, he noted, is funding.

“Everything is on the table,” Graves said, opining on some of those options: Public-private partnerships (not great for rural counties), tolling (not a fan), vehicle miles traveled (big fan), fuel tax, tire tax and battery tax. “We have to recover those miles from the vehicles that are simply not paying for the use of those roads.”

He also put in a pitch for vehicle miles traveled both for personal and commercial vehicles. “Infrastructure is something the government should do and should do well,” Graves said.

“It passed the Environment and Public Works Committee by unanimous vote,” he said. “People, we don’t do many things, anywhere, by unanimous votes in the U.S. Senate, so this is not only bipartisan, but it is strongly supported.”

Though Cardin said he preferred a six-year reauthorization, “I think as a result of what happened the last reauthorization, it’s going to be tough enough to get five years at a higher level.”

He also noted that the bill provides a climate change and resilience section.

It will be crucial, he said, to allow plenty of local control for the funding.

“Locals make better decisions than we do in Washington when it comes to infrastructure; we want to give you more control over how those decisions are made.”

Sen. Mike Braun (R- Indiana) tried to scare counties out of looking for help from Congress.

“The mid-term to long-term does not bode well for those of us who believe in infrastructure, to be honest,” he said. “You need to consider a different business model if this place does not reform. Maybe look at a new business partner until this one gets its act in order,” noting that congressional priorities should be defense and securing funding for entitlements.

“We have historically low interest rates because we’re the only reserve currency, but if that changes, we’re going to start paying higher interest rates and then everything here gets difficult,” he noted.

“We did what I think worked well, didn’t ask for others to pay for everything, put some of our own skin in the game, then it gets done more efficiently,” he said. “The counties and cities that complained about it found a way to come up with their half. Healthy balance sheets, P3s (public-private partnerships) and more state and local involvement has to be the realistic way because you can’t rely on a business partner like this place.”

“You have to at least hedge your bets.”