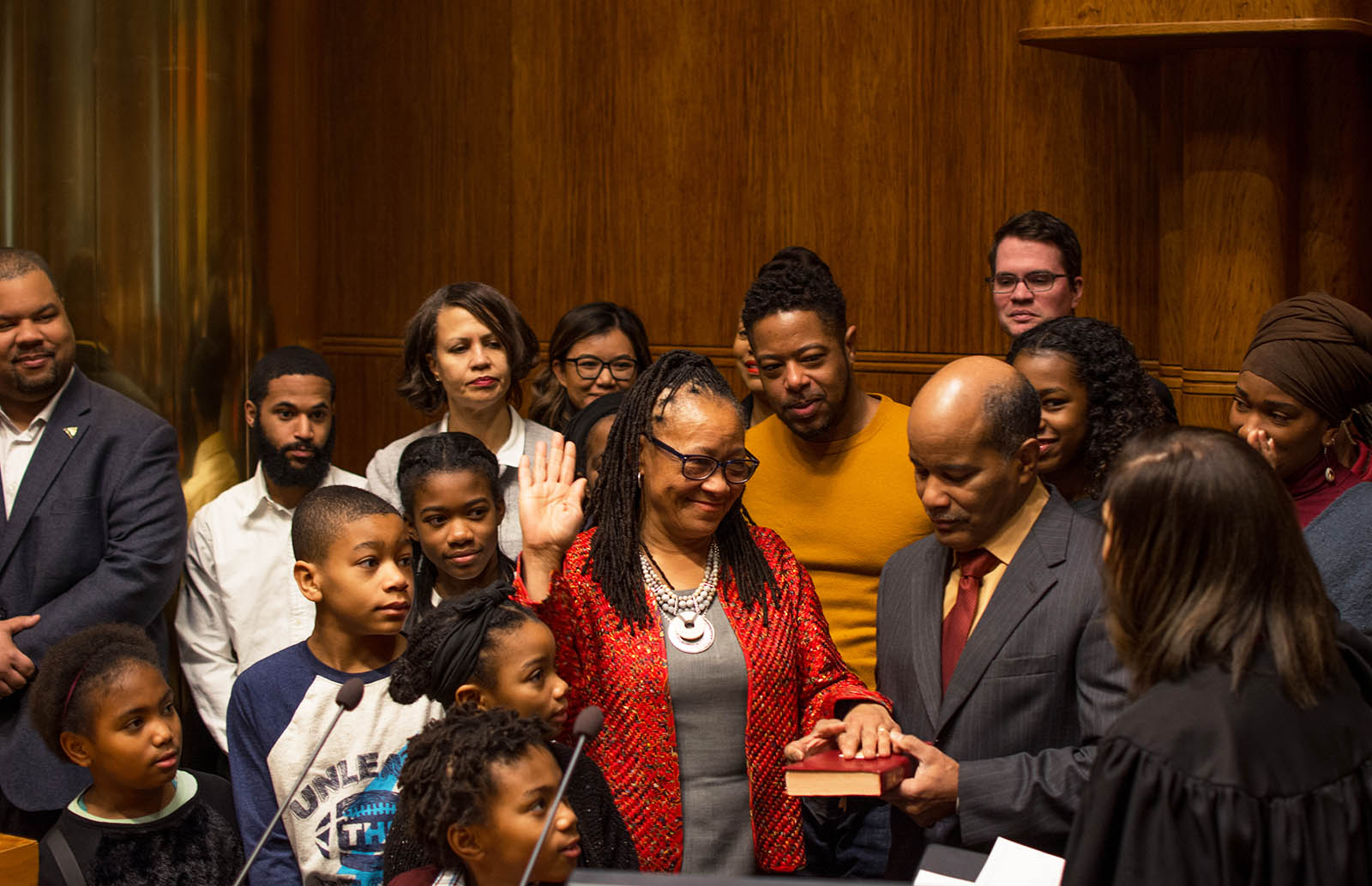 Julie Ring feels she has to be somewhat protective of Ramsey County Commissioner Toni Carter. In her first year as the Minnesota Association of Counties’ executive director, Ring saw just how hard Carter would go when opportunities arose, a willingness that continues six years later.

“She says yes to everything,” Ring said. “She wants to be involved, she wants to make sure the perspective she brings can be heard and she knows she’s unique within Minnesota, so she takes seriously her role in being representative.”

She traveled extensively during her years on the association’s executive committee in the mid-2010s.

“Nobody outworks Toni. She was really committed to getting outside of her own county and understanding how policies play out in counties across the state and really put her money where her mouth was,” Ring said. “She went out of her way to understand all counties in our state, which made her very popular, she formed some deep friendships.”

The position is giving her a chance to lead many initiatives she has worked to advance in her 15 years on the Board. Since 2017, the Board has been pursuing work to advance racial and health equity in its decision-making in the county.

“I think it’s an opportunity, not just for me, but for our county to move into that space and for all of our community to see what work we are doing together,” Carter said. “We’ve been building work together that’s about transformation, that’s about addressing the kinds of racial disparities that we’ve seen in Ramsey County. We have a need to lead in the step forward for equity such as no other county in the state, our entire success and prosperity depends on our ability to make sure everyone is able to be successful.”

“As a Board, we’ve been going on a journey to understand what that’s about and to deconstruct the imbalances that we have even in our work to benefit people.”

People of color make up 20 percent of the population in Minnesota, according to 2018 estimates by the U.S. Census Bureau, and the state’s African-American population has grown by 36 percent between 2010-2018. Ramsey and neighboring Hennepin counties are the most racially diverse in the state.

Leslie Richmond, president of the Minneapolis chapter of the NAACP, called Carter’s role historic, but focused on the work that remains ahead.

“It very important in a state like Minnesota, where we have some of the worst racial disparities in the nation, we recognize that representation matters,” she said. “Having voices that look like the community members they're serving is important.”

Carter’s son, St. Paul Mayor Melvin Carter III, sees her race as secondary to the results of her efforts in county government.

“Her impact goes so far beyond communities of color,” he said. “What she’s been so instrumental at is helping rethink and realign systems; so often our systems exist for the system’s benefit. To make it easiest to administer but not to serve people. She wants to make sure what the county does first and foremost benefits people. She’s always pushing for results and outcomes.”

An Alabama native, Toni Carter grew up in Cleveland, where she worked on Carl Stokes’ successful campaign in 1968 to be the first black elected mayor of a major U.S. city. She came to Minnesota to attend Carleton College.

After a career in the private sector and as a middle school teacher, she served on the St. Paul Board of Education, and she saw her work there intersecting with Ramsey County’s.

“Our goal was to secure a quality education for all, but it’s hard to learn if you haven’t eaten or you haven’t had a safe place to lay your head,” she said. “I found myself needing to work with the county and other partners in the community to ensure that children had dental insurance or homes or transportation.”

She got an inside look at how Ramsey County’s services could complement the school system’s efforts.

“I started to see there is so much that children need, that families need, that whole generations need, so much that counties are responsible for in the safety net services that we provide and in the ability to help get people onto the right track,” she said. “There’s so many things that we do, whether its workforce services or social service, even economic development in areas of concentrated poverty that is so important to ensuring that every child can achieve and grow to be included in our economy and to be successful.”

With that realization and seeing the chance to do more, she ran for county office in 2005.

“I saw it as the fabric of creating healthy communities,” she said. “Making sure young people can have good starts and be supported while they grow and work. The county is a great place with all of the services and investments and employment opportunities to be able to do that.”

Helen Holton, executive director of the National Organization of Black County Officials, has known Carter since Holton, then a Baltimore City councilwoman, was involved in NACo. She sees Carter as a leader grounded and rooted in inclusion and what is possible.

“The browning of America is rapidly approaching and it’s only realistic to expect that the leadership will follow suit,” she said. “This is a generational shift in leadership and it’s creating a different picture of what America looks like and how it is governed. It takes a lot of small steps like this to change how we think about the accessibility of leadership.”

Carter tried to encourage her son to pursue a career in the private sector, but her example and that of his father, a retired St. Paul police officer, were too hard to shake. He’s the first African American in Minnesota to serve as a mayor.

“She has the benefit of working intergenerationally,” he said. “She’s grooming the next generation to lead.”

Richmond said that Carter’s role and the recent election of Hennepin County Commissioner Angela Conley have helped draw the attention of the state’s African  American community to county government.

“Now that you have people of color running for these positions, that’s bringing some more attention to them,” she said. “They are roles that have been traditionally overlooked and a lot of times we see names on the ballot but don’t know anything about them. We, as a community, aren’t teaching people about government and how it operates — to be able to have faces that represent us not just in the city, but in these county positions like commissioner and judge.”

“Like many states, our population is diversifying and we are seeing that to some extent in our county commissioners, but it’s a slow trajectory,” she said. “We have a limited number of county commissioners of color and so those folks get called on a lot to try to bring their perspective into our work. I think Toni has just been a model of that, in her own county and in our whole state, where we have pockets of refugees or immigrants and commissioners are still learning about those new communities.

“Toni has been so willing to be engaged with those folks as they’re working to understand the changing demographic,” Ring noted. “She’s had to serve as a representative all by herself for a while.”

“We’ll have a conversation with someone who’s angry, or sad or crying or upset or is drunk and I’ll find something ridiculous and she’ll come away with a half dozen policy ideas, she finds value in everyone’s experience,” he said. “She keeps herself open to allow people to touch her on a humanistic level and I think it gives her access to a set of relationships that aren’t accessible to everyone because she has mastered the process of listening very deeply to everyone she meets. People [who] other people are ignoring. That’s something I try to emulate from her.”