These are tough times for government. Across the nation, local governments are under enormous pressure to maintain and improve performance, while at the same time doing more with less.

One proven response to this leadership challenge is to improve the level of employee engagement. After all, the primary resource we have in government is talent. If our people are engaged and perform well, government will also perform well.

Decades of research have shown that improving employee engagement can be a key to improving organizational performance, including in local government.

As I detail in my book, Engaging Government Employees, engagement is linked to outcomes that are important in government such as achieving strategic goals, delivering responsive customer service, promoting innovation, retaining good employees, driving high attendance, and keeping workplaces safe. 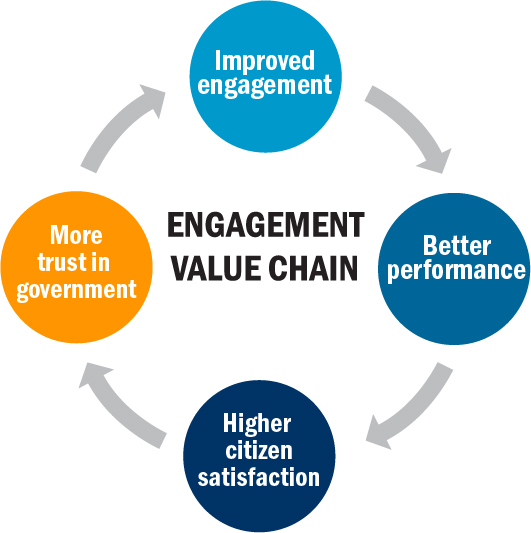 As this cycle shows, measuring and improving engagement is not just a touchy-feely activity or exclusively the domain of the human resources department. Instead, creating a culture of employee engagement — the ultimate goal — requires commitment and action across the entire organization.

The poll, conducted by my organization, the CPS HR Institute for Public Sector Employee Engagement, included responses from 1,946 public and private-sector employees. The results are nationally representative of the private and public sectors, as well as the three levels of government. 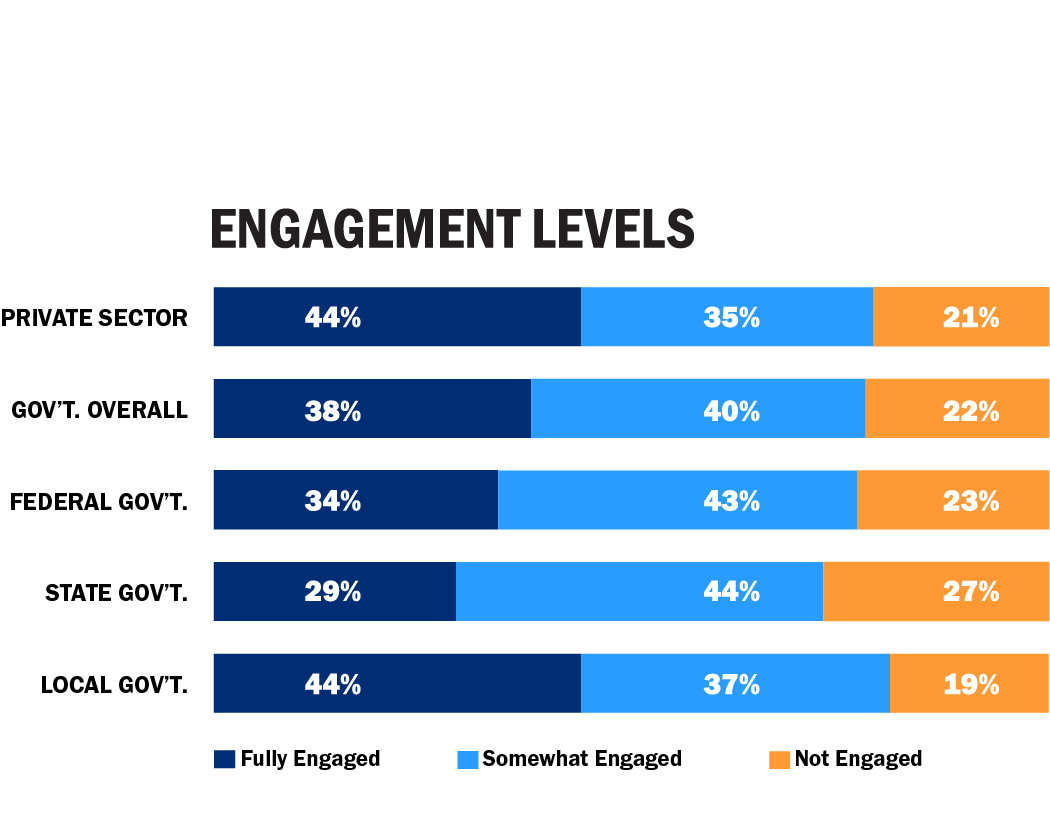 What drives engagement in local government?

In addition to assessing overall engagement levels, our goal was also to understand the factors that have the biggest impact on employee engagement — the key drivers of engagement, statistically. In other words, which workplace factors will generate the highest return on an investment in improving engagement?

Based on previous research, we analyzed potential drivers such as leadership, supervision, training, appreciation and inclusion.

In local government, we found that the top workplace drivers are:

In other words, these are the areas that, in general, local government employees feel most strongly about.

How did local government score?

For the next two local government drivers, supervision and the local government scores (68 and 66 percent positive, respectively) are on par with the private sector.
However, these scores still show that about one-third of local government employees responded negatively to the questions in these categories.

In response to the question, “I feel valued for the work I do,” 68 percent of local government employees agreed, compared to 72 percent of private-sector respondents.

The final driver we found is “I feel encouraged to come up with new and better ways of doing things.”

Despite the importance of this factor across sectors, only 68 percent of local government respondents agree with this statement, almost equal to the private sector score (70 percent).

So what do we conclude, and what is actionable, from our research?

Priority areas to improve engagement in local government include:

While our results are useful and revealing, there isn’t a one-size-fits-all solution to improving engagement in government, especially since there are more than 90,000 government jurisdictions just in the U.S.

Instead, each county should survey its own employees to identify where it is succeeding and where it can improve. Then, the organization needs to take action to build a culture of engagement.