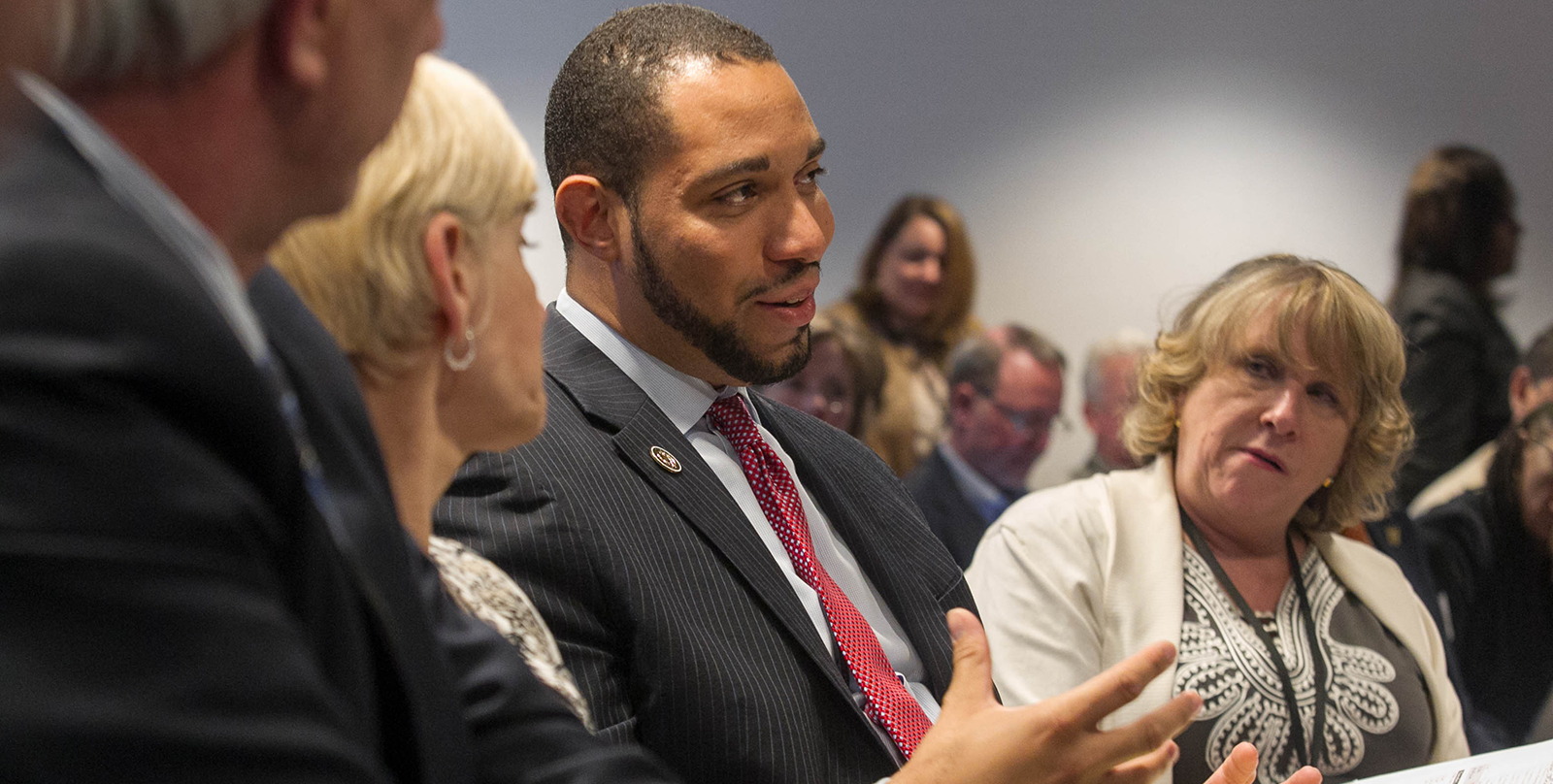 When she took over as Bexar County, Texas’ sheriff almost four years ago, her already-full agenda became busier when she learned the extent of the jail population with mental illness.

Those inmates counted for 22 percent, their conditions were going untreated and typically contributed to longer stays.

“Frankly when I became the sheriff… I really didn’t recognize the issue about mental illness,” she told attendees at the National Stepping Up Summit April 17–19 in Washington, D.C. “There were 450 people (with mental illness) who had been in and out of our jail six times.

“These are the kind of things that we as leaders need to bring to the forefront and to our public to let them know it is an issue and there are better ways of dealing with mental illness in our communities, as opposed to just putting them in jail.”

That is indeed the kind of thing that county leaders have been pushing over the past year, an effort that culminated in the three-day summit, sponsored by NACo, the American Psychiatric Association Foundation and the Council of State Governments Justice Center. Teams from 50 counties, out of more than 200 applicants, heard from experts in mental health services, criminal justice and administration on the local, state and federal levels, plus participants in the mental health system and their families.

Stepping Up is part of an overall effort to encourage counties to divert jail inmates with mental illness to settings where inmates’ underlying conditions can be addressed.

That direction has stuck with Pamerleau and she has spread the word. She offered Sen. John Cornyn (R-Texas) a chance to meet the largest mental health provider in the country — the Los Angeles County Jail.

“That made a big impression on me because I did not realize our criminal justice system had become the provider, by default, of mental health services to the extent it does,” he said. “It brought the point home to me like nothing else.”

“For us, we want to make sure that we’re asking the right questions,” in framing the problem correctly and providing support for change where necessary.

“It’s hard to convince others it’s the right thing to do,” she said.

“It hasn’t been an easy sell,” she said. As a district attorney, “You wake up every morning and you read the headlines and you pray the most recent person who was on probation who killed someone doesn’t have your name attached to them. That’s your fear,” she said. “The public has little tolerance for district attorneys who make mistakes, and you make a mistake by taking a risk.”

Lacey’s approach was to sell jail diversion to community groups first to generate public support for the new direction, which was funded by the Board of Supervisors in 2015 to the tune of $120 million to create the Office of Diversion and Reentry.

“I didn’t have a plan,” she said of the county’s changes. “I just knew what we were doing was wrong.”

“Communication is where everything breaks down,” he said. “We think we’re doing it, but in truth …when you’re talking about everything from the paperwork, what’s written on the minimus, what guidance might have been provided and doesn’t get printed, what about the judicial marshals who are transporting people from the jail to the facility. Is there any kind of formal way that information is being documented and effectively being communicated, and then on and on from one shift to another?”

Confidentiality is also crucial to acceptance and participation.

“It doesn’t mean you need a suite with closed walls, but you do need sound confidentiality,” Trestman said of intake processes. “People need to feel comfortable enough to share intimate information with someone they just met while they’re distressed.”

Pete Earley shared his bipolar son’s experience with the intake process and how it worked out positively.

When a hospital case manager asked him why he didn’t take his medication, “my son said, of all the psychiatrists he’s had, they’ve only bothered to learn his name and his symptoms.”

Earley praised the Fairfax County, Va. police officer who had crisis intervention training and, when he picked up Earley’s son walking naked down the street, exercised his discretion, did not handcuff him and drove him to the hospital while keeping him calm. Earley chronicled the process in his 2007 book Crazy.

Ray Lay, both a mental health counselor and a patient with dual mental and substance abuse disorders, cautioned attendees to be patient expecting people with mental illness to adjust to medication.

“It doesn’t take a matter of days,” he said. “It took me three years to figure out what worked for me.”

For that matter, though many urban counties participated, the Stepping Up Summit also made room for rural counties to discuss how they approach the problem of reducing the occurrence of mental illness in jails despite lower population density.

Pennsylvania Secretary of Corrections John Wetzel, who worked as a correctional officer in Franklin and Berks counties, said counties had to have clear plans for where offenders would go each step of the way, and make it clear who will benefit.

“If what you’re doing, I can’t draw a line to how it’s going to benefit me, I’m not inclined to invest,” he said.

Council of State Governments (CSG) Justice Center Director Michael Thompson sketched the future of the Stepping Up initiative, which may include providing technical assistance to counties that demonstrate potential for reducing the number of people with mental illness in their jails and designing and implementing state and local collaborations in selected jurisdictions.

CSG is considering holding an annual national summit of county teams and a diverse group of stakeholders to advance comprehensive plans for system change and highlight promising practices and help counties track their progress.

“The APEX event was a tremendous success,” said APA President Renée Binder, M.D. “The compelling conversation  between political commentator and emcee Cokie Roberts and the cast members of Orange Is The New Black raised awareness of the issue of the criminalization of people with mental illness. I truly believe those in attendance left with a better understanding of the problem and a willingness to go back to their home states and take action.”