Stepping Up initiative kicks off around the country 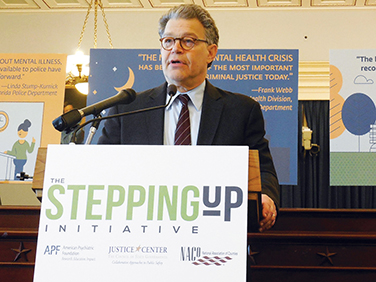 Addressing mental illness starts with a good hard look inside, but all too often, "inside" has meant inside a jail cell. The Stepping Up initiative aims to change that by encouraging counties to divert the estimated 2 million mentally ill inmates currently in local jails to appropriate treatment services instead of leaving them confined and receiving a shadow of the treatment they need to right themselves. The initiative started off strong the week of May 3 with events in Washington, D.C.; Johnson County, Kan.; Miami-Dade County, Fla. and Sacramento County, Calif. The collaboration between NACo, the Council of State Governments Justice Center and the American Psychiatric Foundation challenges counties to publicly declare their intent to tackle the problem and follow through. "The potential impact on public safety and on county budgets is great, but the impact on people who have mental illness and their families is immeasurable," said Ramsey County, Minn. Commissioner Toni Carter, who spoke at a briefing on Capitol Hill in Washington May 5. "This battle won't be won in individual counties, we need a national movement to reduce these numbers and change the way we treat people who have mental illnesses."

As of May 15, at least 14 counties had passed resolutions committing themselves to analyzing their county's deficiencies and developing a plan to get mental health services to the people who need them. The efforts will build toward a national conference on mental illness and jails in Washington, D.C. in 2016. Nationally, Sen. Al Franken (D-Minn.) and Rep. Doug Collins (R-Ga.) hope to help with the Comprehensive Justice and Mental Health Act, which has been introduced in both chambers of Congress. The bill reauthorizes the Mentally Ill Offender Treat ment and Crime Reduction Act which funds specialty courts, such as mental health courts and adds an additional facet: training for every public law enforcement officer in the country to handle mental health crises. T he status quo, without spe cialized training, "doesn't makes sense for law enforcement officers who often enter situations where they themselves are at risk or people with mental illness are at risk and they don't have proper training," Franken said at the Capitol Hill briefing. "It doesn't make sense for courts, which are inundated with cases of people with mental illness. It doesn't make sense for those who often would benefit from treatment and supervision. And it certainly doesn't make sense for taxpayers."

Loudoun County, Va. Sheriff Mike Chapman began training part of his force to deal with mental health crises when he took office four years ago, and those trained officers handle about three cases a day. But he was a realist about where his employees fit. "We end up having to deal with this problem," he said. "We're law enforcement officials and by default, we become the people that tend to handle whatever goes on out there." He pointed out that officers who are trained to deal with mental health crises can appropriately close the cases in a fraction of the time it would take for a layman to handle the same situation. On the other end of the pro gramming field, Carter touted Ramsey County's mental health court as an example of what could be replicated around the country.

Since its introduction in 2005, the court has provided services to 431 people with mental illness to divert them from the traditional criminal justice system. The court focuses on the mental health needs of the defendant in hopes of correcting behavior that may be a symptom of a mental illness, rather than willful disregard for the law.

Denise O'Donnell, director of justice assistance at the U.S. Department of Justice, met, head-on, any skepticism that diverting mentally ill offenders from the justice system would reduce crime.

"We know more than ever before, what works in treating mental illness," she said. "Sci ence is advancing and providing medically assisted treatment for behavioral health issues. We have innovative pilot programs lead ing the way."

"People say we can't release mentally ill criminals back into the streets," he said. "That's what we're doing now."

In Miami-Dade County, Com missioner Sally Heyman recounted how her county's corrections and rehabilitation were nicknamed "the forgotten floors," where the mentally ill waited out their sentences because there was no coordination for their treatment. Those inmates have since been moved to appropriate care.

"We're the safety net," NACo First Vice President Sallie Clark told the crowd in Johnson County, Kan. "We're where everyone goes when they're having their first day. Whether that is needing food as sistance, or needing mental health counseling, or having the worst day of their lives when they're arrested (for) a crime. That's where they end up in local government."