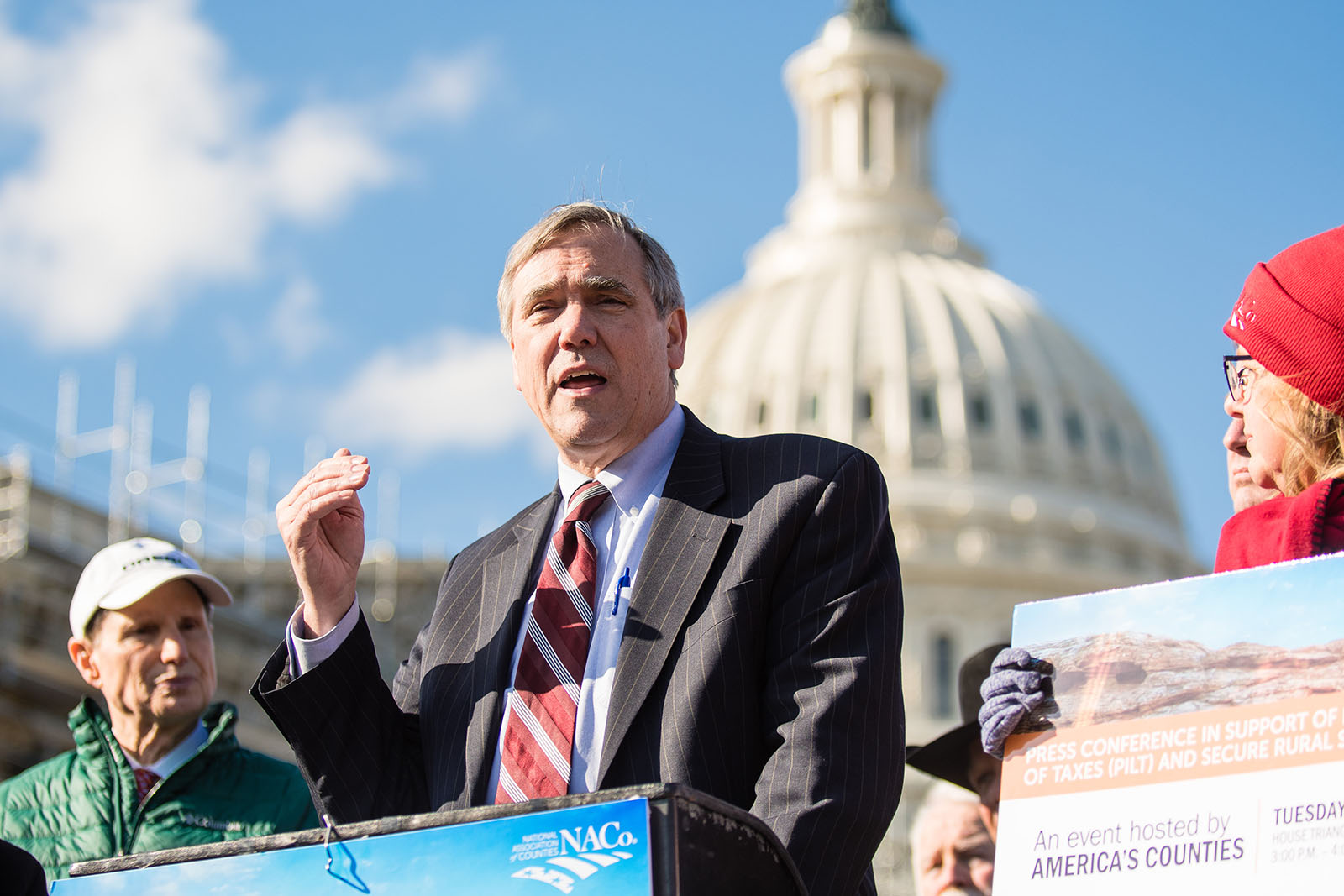 Sen. Jeff Merkley (D-Ore.) speaks to the crowd during the PILT and SRS press conference March 5 at the U.S. Capitol. Sen. Ron Wyden (D-Ore.) stands to the left. Photo by Denny Henry

In order to filter by the "in queue" property, you need to add the Entityqueue: Queue relationship.
“We are as close now as we have ever been,” to long-term Secure Rural Schools funding - Sen. Jeff Merkley during March 5 Hill briefing

With sympathetic legislators in influential positions, county and congressional supporters of federal public lands policies feel they’re in a better place than ever to achieve long-term stability for crucial funding programs.

At a Capitol Hill briefing March 5, those supporters advocated for permanent funding for the Payment in Lieu of Taxes (PILT) program and a long-term funding solution for the Secure Rural Schools (SRS) program, both of which compensate counties for federally managed land that cannot be taxed.

In particular, they championed the Forest Management for Rural Stability Act, sponsored by Sens. Ron Wyden (D-Ore.) and Mike Crapo (R-Idaho), which would create an endowment to fully fund SRS, first passed in 2000 and which Wyden sponsored.

“We are as close now as we have ever been,” said Sen. Jeff Merkley (D-Ore.), who that day declined to run for president in favor of a Senate reelection race in 2020.

“We need to seize this moment and make this happen.”

Wyden pointed out that he, as ranking Democrat on the Senate Finance Committee, and Crapo, the senior Republican on the committee, seemed to have the clout to move the bill.

“We just might be well positioned to finally get the revenue to secure the services that you had a right to have starting over 100 years ago,” he said.

“This is going to be a challenge, we’ll have to educate members of Congress who come from places where there aren’t a lot of federal lands.”

“We already did it once, 20 years ago nobody had ever heard of any of us.”

“Without PILT and SRS, many of the counties I represent would only struggle more to keep up,” she said.

“Both of these programs need long-term certainty. Our rural counties need this certainty.”

Harney County, Ore., which received $2.8 million in FY 2018, is larger than six states but three-quarters of its land is managed by the Bureau of Reclamation, Bureau of Land Management, U.S. Fish and Wildlife Service and U.S. Forest Service.

“When SRS wasn’t reauthorized (for FY 2016), we were having conversations on what roads we were going to grind up,” said Commissioner Mark Owens.

“We were not going to have the money to protect the investment and the equity in infrastructure of our roads. We were talking about losing 24-hour law enforcement and hospice care.”

“That uncertainty is not the way local governments want to budget to address safety-net issues like making sure our homeless veterans have services, that we have mental health programs, that we are serving our infrastructure and providing for public safety,” he said.

“If we’re going to have federal lands, we should compensate the counties that provide emergency services, provide roads and other services that county residents depend on,” he said.