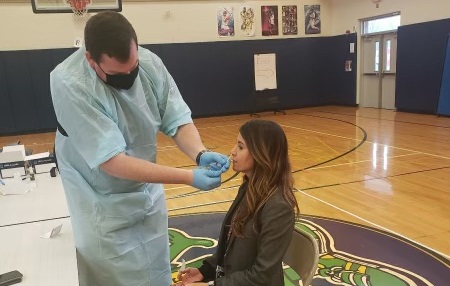 In order to filter by the "in queue" property, you need to add the Entityqueue: Queue relationship.
Counties are taking steps to keep school doors open and provide a place for in-person learning by launching in-school testing initiatives to find and isolate cases of COVID-19

It’s been a rollercoaster ride for schools across the United States as they work to match the ebb and flow of increased COVID-19 cases by closing, re-opening and often using a hybrid model somewhere in between.

Counties are taking steps to keep school doors open and provide a place for in-person learning by launching in-school testing initiatives to find and isolate cases of the virus.

The county launched a back-to-school testing initiative at the end of the summer which tested over 6,000 faculty members to find and isolate positive cases of the virus.

After school started, McMahon said the county launched a second asymptomatic saliva screening initiative in school buildings to test individuals each day and identify those who had the virus with no symptoms.

As cases began to increase throughout the state, New York Gov. Andrew Cuomo (D) enacted micro-cluster restrictions that impacted New York schools. Areas of Onondaga County were first listed in the yellow zone and some moved to the orange zone at the end of November.

For schools to remain open in the yellow zone, 20 percent of the in-person school community (which includes students, faculty and staff) must be tested per week. Schools in orange zones must close for four days and ensure that all students and school personnel receive a negative test before returning to in-person classes. Upon reopening in the orange zone, 25 percent of the school is required to be tested per week.

McMahon said the county has over 70 school buildings which require multiple testing teams to meet the state’s requirements.

The county emergency management team is leading eight groups with team leaders from each county department. The teams are also targeting specific ZIP codes that have higher positivity rates in addition to testing within schools.

“Our priority was to keep kids in school for in-person learning,” he said.

Parents have to opt-in for their child to be tested and according to McMahon, almost all parents opted to have their children tested. School personnel also opt-in to the testing program.

“We saw tremendous participation from our teachers and our faculty,” he said.

McMahon said these tests produce results in a timely fashion. Onondaga County also established a symptomatic testing site outside of school buildings where there is one line specifically for students and school personnel.

“We do asymptomatic screening for schools looking for hidden pockets of the virus,” McMahon said. “Then for symptomatic cases, we set up our own testing site where we’re doing at least 200 symptomatic tests per day so that parents can quickly get their children back into the classroom.”

McMahon said as of Nov. 24, the county has seen “very little spread” of COVID-19 in classrooms.

“Kids going to school is the right thing for kids, but it also helps keep the economy open,” he said. “Your continuity of care issues aren’t disrupted.”

With Onondaga County just being under the population requirement for CARES Act funding, county dollars are funding the testing initiatives.

McMahon said they have received testing kits through the state that were passed down from the federal government, which has been helpful despite the remaining personnel costs the county has to cover.

Officials in Suffolk County, N.Y., where certain areas have been designated in the yellow zone as of Nov. 23, also partnered with school districts to establish a school-based testing program.

“Testing is one of our most valuable tools in combatting the virus,” he said.

Suffolk County Health Department nurses were on site at the Hampton Bays middle school to assist the school’s nursing staff in administering tests.

“Our goal in launching this free school-based testing program is to be proactive in our effort to get control of these numbers in the county and to keep school open,” he said.

Within a five-day period, the Hampton Bays rate was around 6.5 percent, compared to the overall 3.5 percent rate throughout the county.

“We’re going to be proactive which is what this testing program is about,” he said. “It’s a part of our larger comprehensive effort to get our arms around these numbers and stop the surge in the county.”