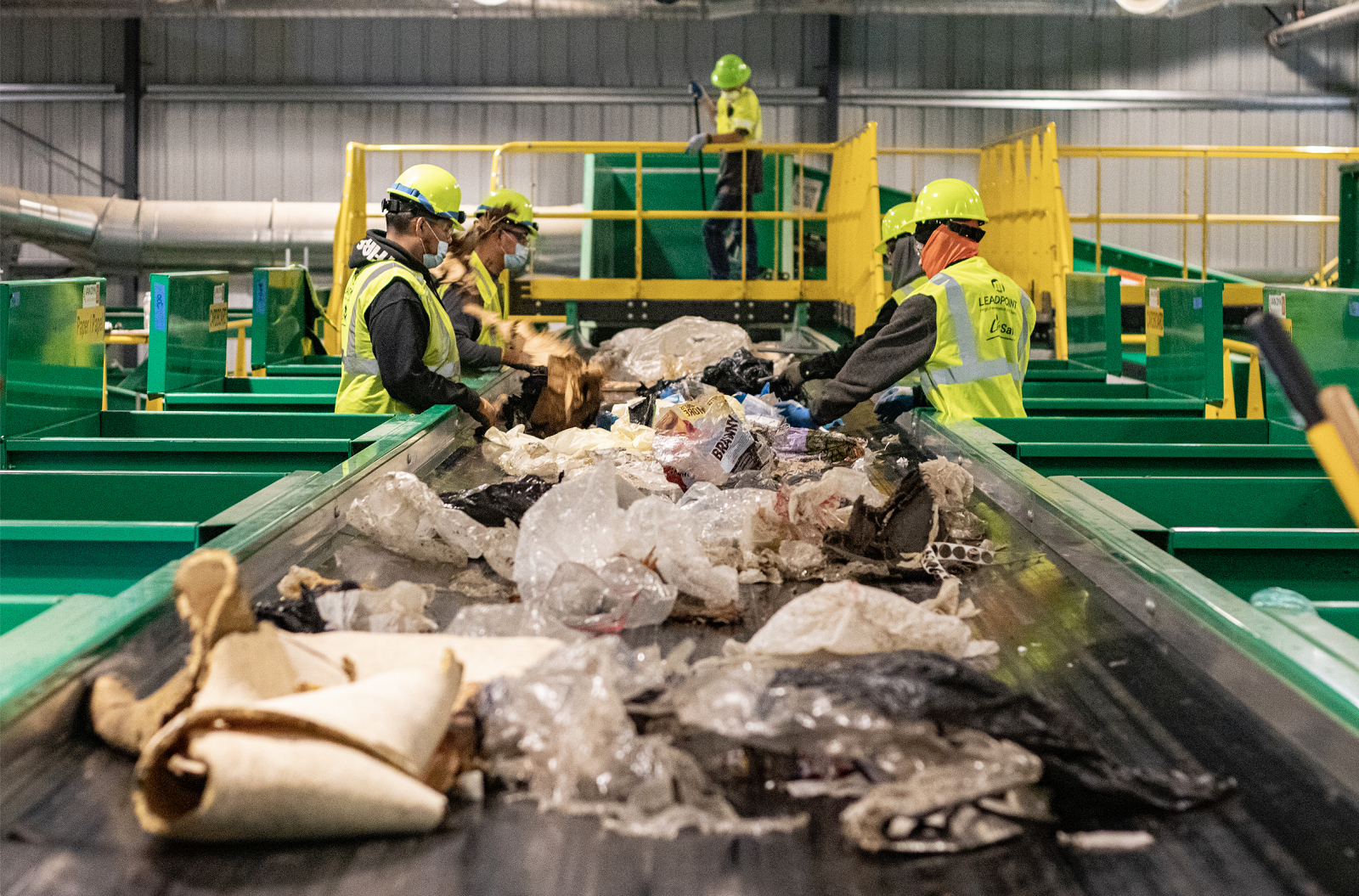 The ReSource Center is projected to increase the county’s recycling rate to over 85 percent and divert 60 percent of its waste from the landfill, but landfill reduction is just one of the numerous environmental benefits of the self-sufficient project. Other benefits include litter reduction and reducing dependence on petrochemical soil amendments through generating compost, according to Carlyle Johnston, the center’s project leader.

“When it’s fully operational, it will create enough energy to power around 3,000 homes on the South Coast,” Johnston said.

What makes the center unique is its singular location, as the only operation in the state to house a materials recovery facility, anaerobic digestion facility, compost management unit and landfill.

“There’s over a dozen anaerobic digestion facilities in California that do similar kinds of things — there’s obviously dozens of landfills and dozens of material recovery facilities,” Johnston said.

“When we were looking at doing these types of technologies, I would go to other communities, like for example, the San Francisco Bay Area, and for me to visit their anaerobic digestion facility plus the compost management unit plus a landfill plus a [materials recovery center] that was bringing the feedstock, that would take all day of driving from one location to another because that was a minimum of four locations, so we get a lot of interest in our site being that everything is in one place.”

The ReSource Center is the largest county project in Santa Barbara’s history and had a 155 million municipal bond issuance, according to Johnston. Formally known as the Tajiguas Resource Recovery Project, the operation has been a long-time coming, with the Santa Barbara County Board of Supervisors interest in landfill alternatives dating back to 2002. In 2007, the county hired consultants for the project and an RFP was issued in 2009, according to Johnston.

“There’s no good place for a landfill, they’re all terrible, but one of the arguments I think that won the day on this is you can export your problems like waste somewhere else, but that doesn’t magically transport it there,” Johnston said. “So, the further away you send your trash, the higher environmental and financial cost that’s going to be, especially in an isolated community like Santa Barbara County, which is 100 miles from L.A. and kind of in a remote area of California, relatively speaking.”

Because of the scale of the project, the county’s public works department knew that establishing community dialogue around the center and its goals was essential for success, Johnston said. So, they created a comprehensive public outreach program and held more than 150 presentations to receive input from elected officials, neighborhood associations and environmental non-profits, including national organizations like the Sierra Club and Channel Keeper as well as local ones, including Heal the Ocean and the Community Environmental Council, Johnston said.

“One of the challenges that’s common for all counties is that this was done in coordination with four cities within the county, so anytime there was a change or a concept or an idea floated around this project, it had to go not just to the Board of Supervisors, but also to all four city councils as well for approval,” Johnston said. “So that process took a long time and when there was contract negotiation, it had to be negotiated with the cities and the private vendor and going back between all of those entities made it a really long iterative process, plus we had a full environmental review process which took several years.”

The ReSource Center has created 100 permanent living wage jobs, some of which include mechanics, heavy equipment operators and compost specialists and since its opening in July 2021, thousands of people have toured the facility, Johnston said.

“We always wanted to make sure, because this is a publicly owned facility, that the community had access to it and wanted to promote it –– not to brag about the county’s accomplishments, but so that people become more aware of the environmental impact they have in day to day living,” Johnston said. “… Because Santa Barbara is an environmentally conscientious community, there’s always been an interest in waste.

“Waste is an excellent starting point for any environmental issue or topic that you want to talk about, because from there, you can talk about greenhouse gases, climate change, linear economy, renewable versus non-renewable resources, pollution and its many different aspects —plastic pollution in the ocean, air pollution, groundwater pollution.”

The materials recovery facility houses an education center, where visitors can witness everything that goes into the behind-the-scenes of trash and recyclable sorting operations.

Students from all age ranges, from kindergarten to college, tour the facility. Johnston said he thinks it’s important that people understand the process — of where trash and sewage go, where water comes from and how power is generated.

“People should have an understanding of the infrastructure of America and how dependent they are on it, because in a lot of ways, we made these things out of sight, out of mind, and that’s challenging because we have in the United States a strong streak of libertarianism, and a lot of people think, ‘I don’t need government,’ but they don’t realize how much it impacts their lives because they take it for granted. ‘I put my trash out on the curb, it vanishes. I ride [on] roads, I turn on my sink every day and the water comes out — I don’t think about it.’

“So, having a better understanding of public infrastructure in America and how that impacts our lives and the environment — it’s just an important education that I think most Americans lack.”

While the center’s running and processing, Johnston said it’ll still take another year before it reaches its goals. It’s just one piece of what the county needs to do moving forward in its environmental efforts.

“The materials recovery facility has literally over a million moving parts,” Johnston said. “It costs a lot of money and it does take a long time to get right, and the anaerobic digestion facility even longer to process organic waste completely, to produce compost is a three to four-month process, and anytime we make a change, we need to wait three to four months to see what impact that change has made, so it’s a slow iterative process with the anaerobic digestion facility, and so that’s still working out.

“I’m optimistic that we will achieve all these goals, but it’s still going to take some time. We’re diverting more waste than we have before, generating electricity and we’re now diverting organics from the trash which we didn’t [do] before.”