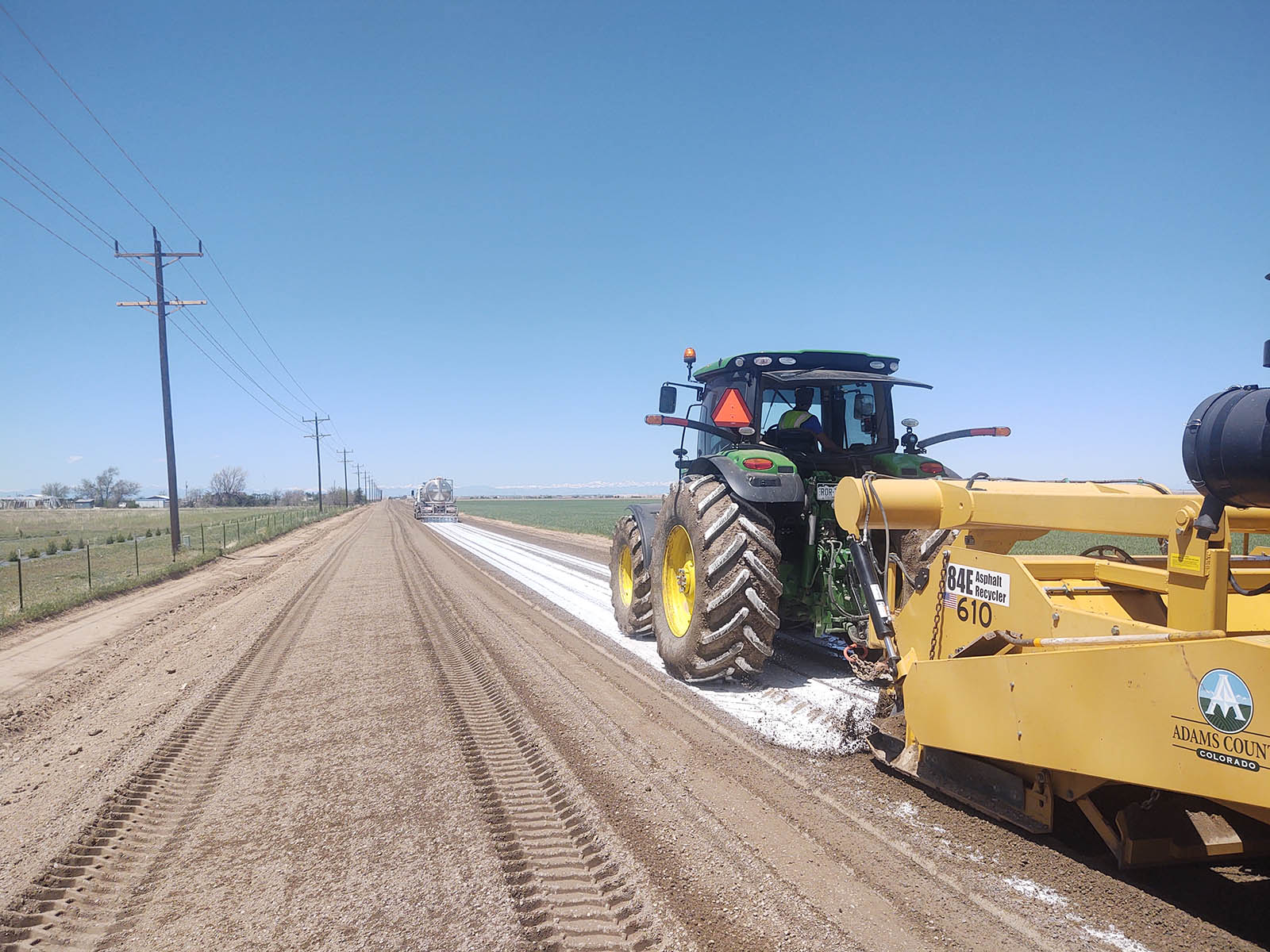 For the Adams County, Colo. Public Works Department, the eighth time was the charm.

“There was just a lot of public outcry because the road conditions were so bad and we needed to quickly develop something,” said Public Works Operation Manager Jeremy Reichert.

Adams County’s Gravel Roads Resurfacing program is the recipient of a best in category 2020 NACo Achievement Award in the Transportation category.

With more than 1,600 lane miles and more than 500,000 residents, the county has experienced significant population growth in recent years that has led to declining roadway conditions. One-third of Adams County is urbanized and the rest is very rural, Public Works Director Kristin Sullivan said.

“For a fairly long period of time, the rural part of the county really had not been given sufficient resources in order to maintain the roads at the level that the residents really expected and deserved,” Sullivan said.

Roads throughout the county were also impacted by the weather, specifically during the spring and winter seasons when moisture caused roads to get muddy and caused vehicles to slide. County residents often saw maintenance teams grading certain stretches of roads as often as three times per week.

The poor conditions of the roads led to safety concerns and limited accessibility for residents, farmers, businesses and emergency service providers. This slowed business development, made service deliveries challenging and limited the ability for emergency responders to respond to calls.

“We struggled with school districts being able to pick up the kids at their designated stops, emergency responders had difficult times tending to calls… so it was definitely a major problem,” Reichert said.

The department’s new mixture primarily uses a polymer-treated base and creates a better driving experience, greater durability and results in less maintenance. The team found the formula after discarding seven trial mixtures.

“We would strategically test out sections of road side-by-side to do comparisons and then our assessment of that was based on time, meaning ‘How much time could that roadway go before we had to come back and intervene with some form of maintenance?’” Reichert said.

He described the mixture as a bonded gravel with a higher clay content that doesn’t “unravel.” The department obtains the materials from two companies, mixes it with water, loads it onto a calibrated water truck and applies it to the roads.

Through the program, staff have seen a reduction in the number of times they have to complete surface grading — with a decrease from three times per week to two times per year on some roads. The mixture can last on average between 12 to 14 months, according to Reichert.

“A lot of people sometimes think that the road is paved because we do incorporate recycled products like asphalt and concrete recyclables so you get that coloration,” Reichert said.

The department is prioritizing which roads to resurface and will have treated 820 lane miles by the end of 2020.

The department’s budget has increased significantly through the program and now allocates $3.3 million to cover the cost of gravel material, dust abatement, additives and contract hauling services. It is estimated that spending $1 on gravel maintenance saves or delays spending by $6 to $10 to fix roads in the future.

“What we’re doing isn’t necessarily the cheapest thing to do, but it fits for us because we have limited staff, we have other responsibilities and so there’s that good old saying that ‘You pay me now or you pay me later,’” Reichert said.

Sullivan said a culture of innovation within the department led to the growth of the program, adding that the department’s staff has been more motivated and engaged because of its success.

“We really have gone from a culture where people do things the same way because that’s the way they’ve always been done to a place where we continue to ask ‘How can we do this better? How can we be more efficient with our resources?’” Sullivan said.

“[Public works departments] can really be a part of the leading edge of how to do maintenance in an environment that’s challenging but really has a huge return on investment in the long run,” Sullivan said.