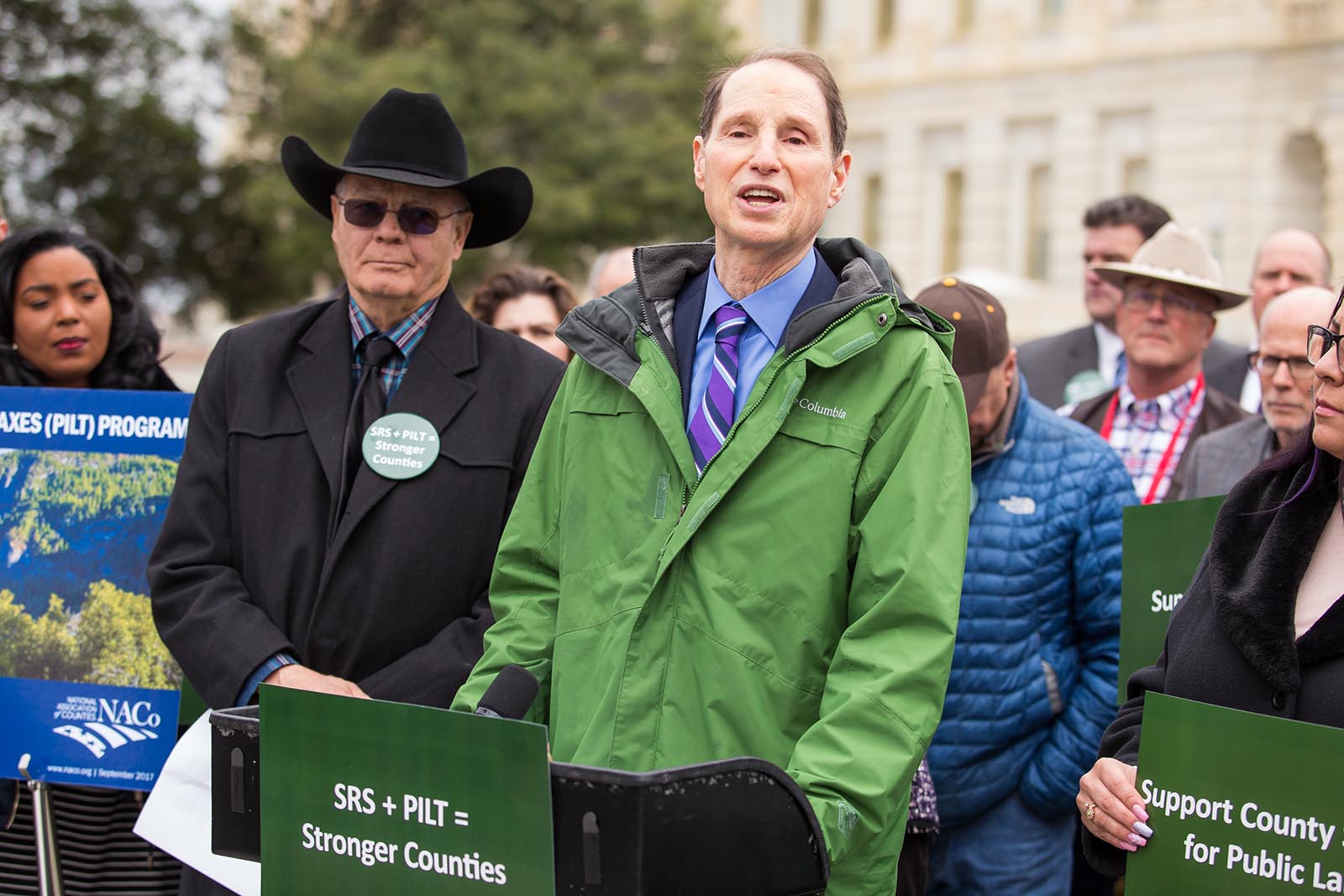 With the 2017 Western wildfires still fresh in their minds, a bipartisan congressional group came out to support public lands counties intent on solidifying the Payment in Lieu of Taxes (PILT)  and Secure Rural Schools (SRS) programs at a Capitol Hill rally March 6, along with active forest management policies.

Members of the House and county officials spoke in support of PILT’s permanent funding, which pays for county services that would otherwise be funded by property taxes, were large swaths of land not owned by the federal government.

Meanwhile, Sen. Ron Wyden (D-Ore.), SRS’s main sponsor in 2000, pointed out why the program was created — to make up for the decline in revenue from timber harvest on federal lands. The program expired in 2015, and payments to those counties had plummeted. It was not included in President Trump’s budget proposal.

“When we wrote this bill, we always said this measure to help schools and roads and rural services was intended to be a complement, not a substitute for increasing the timber harvest in a sustainable fashion,” he said.

Wyden added that the federal government’s refusal to fund SRS was compounded by federal policies that made it harder for local governments to manage their land to their advantage.

He also decried the practice of “fire borrowing,” in which the U.S. Forest Service and Department of Interior divert fire prevention funding to fight wildfires.

The wildfires last year in Washington, Oregon, Montana and California, many on federally-managed forest land, led to speakers criticizing the federal government’s’ failure to adopt active forest management practices, which members of Congress and county officials alike said would reduce the threat ofwildfire and yield more timber revenue for the counties.

“There’s fuel sitting in the forest floor,” Rep. Jaime Herrera Beutler (R-Wash.) said. “You wonder why we’re having devastating forest fires.” Herrera Beutler was one of six representatives to join Wyden at the event.

Rep. Cathy McMorris Rodgers (R-Wash.), chair of the House Republican Conference, represents several counties that rely on SRS payments, and she said funding the program was a priority for the coming budget agreement negotiations.

“What happens in our national forests drives the economy in those communities; and when there isn’t the forest levels and the revenue coming off the forest it means these communities are in a desperate situation,” she said.

Columbia County, Ore., for example, received $2.3 million in 2008 from SRS, according to Commissioner Henry Heimuller. This year, with the program expired, payments were reduced to roughly $400,000.

“For a small county like ours, that makes a huge difference in our ability to pave roads, keep our schools open, to keep criminals off the streets and police cars on the roads,” he said.

Rep. Paul Gosar (R-Ariz.) represents the western side of Arizona, much of which is managed by the Department of Defense, Bureau of Land Management or the Fish and Wildlife Service.

“It’s a new renaissance in this country and there’s no reason Secure Rural Schools can’t be part of it,” he said. “(PILT) is not a hand out, it’s not welfare, it’s what’s due us as rural counties in Western states.” He and Herrera Beutler stressed that counties have upheld their end of the PILT and SRS bargin. “This has nothing to do with partisan politics, this is good government,” Herrera Beutler said. “This is a contract between the federal government and the counties, but it’s … a contract the federal government has reneged on.

“Either the federal government needs to return some of that authority for locals to use it, or they need to keep the contract.”