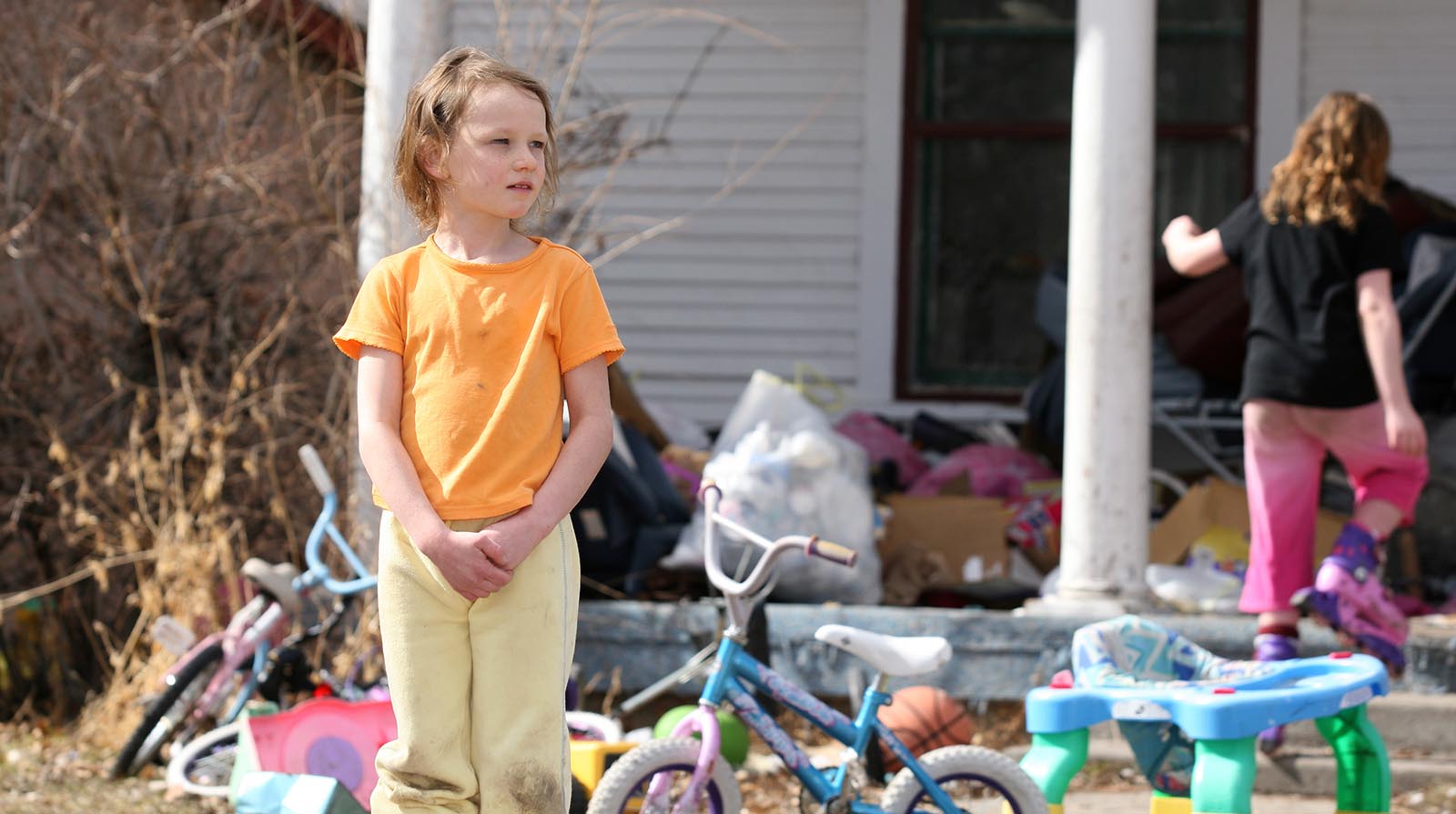 Addressing the needs of children in poverty, particularly ages 0-3, is an investment in their lives and the county's own future, given the opportunity to reduce future stresses on social services

By age 3, most children can walk and talk and recognize and name most of the objects they see on a regular basis. They should have the skills to do a scavenger hunt, tracking down what they need to complete their collections to win. It’s fun, how life should be at that age. But if they live in poverty, chances are their parents have been doing their own scavenger hunt, trying to make a living to help their children have a better life someday.

This includes making use of human services programs that counties provide. Counties spend $58 billion annually on human services, but county governments rarely package those programs for children in poverty the way they handle public works, health and land records.

But the resources are there, and counties have an opportunity to reach the youngest residents who stand to benefit the most.

And it makes sense to do it. Children who grow up in poverty are twice as likely to struggle with financial issues later in life, according to a Federal Reserve survey. The Urban Institute has found that growing up poor puts many kids on the path to being less successful in school performance and careers, and they are more likely to have a baby in their teenage years or be incarcerated, perpetuating the cycle of poverty.

Poverty can set them on a path to interactions with county departments ranging from social services to corrections, all among the most costly services counties provide. Breaking the cycle of intergenerational poverty does not just improve people’s lives, it affects a county’s bottom line.

The scale of the problem

More than 21 percent of children in the United States, or 15 million, live below the federal poverty line. The National Center for Children in Poverty says families need twice the poverty line amount to adequately meet expenses, which boosts the proportion of children living in poverty to 43 percent. They’re largely in rural areas, where economic opportunities for their parents are harder to come by.

These children face long odds on escaping poverty. Polling by the Pew Charitable Trusts found that 70 percent of Americans raised in the bottom fifth of the income scale will remain in the lower 40 percent throughout their lives. Without help, their futures will be limited.

There’s no way to measure exactly what they will miss out on in their lifetimes, but the Children’s Defense Fund said they will be less likely to graduate from high school, which will have a long-range impact on their professional and economic futures.

Some counties are making efforts to reach out to families with children ages 3 and below, focusing on those first three years because of the rapid pace of brain development during that time. In that period, the human brain will grow to 80 percent of its adult size, and enough neural pathways are being built that children are riding tricycles, climbing, opening jars, drawing circles and empathizing with their peers, according to the Centers for Disease Control and Prevention.

At the same time, the effects of stress and trauma endemic to poverty can interrupt that brain development when it is so vulnerable and cause lifelong health and behavioral problems.

In 1996, pediatric neurobiologist Harry Chugani told Newsweek’s Sharon Begley that early experiences are so powerful, that “they can completely change the way a person turns out.”

That’s why the youngest children are so vulnerable.

Food insecurity, physical neglect, emotional neglect — all are traumas known as adverse childhood experiences, or ACEs. Although more subtle than physical abuse, sexual abuse or witnessing acts of violence, the constant stress a child experiences as a result can lead to social, emotional and cognitive impairment, causing the adoption of health risk-behaviors.

Imagine a day spent waiting for a healthy, balanced lunch to arrive, never certain when it’s coming or if it will. Then imagine not having the ability to go out and pick it up yourself if you’re tired of waiting. That’s just one stress children in poverty experience daily.

The National Scientific Council on the Developing Child found that early childhood trauma has been associated with reduced size of the brain cortex, the part of the brain responsible for complex functions including memory, attention, perceptual awareness, thinking, language and consciousness.

The 2016 National Survey of Children’s Health found that at least 38 percent of children in every state has had at least one adverse childhood experience.

What counties can do

Sometimes poverty continues for generations because economic conditions in an area make it extremely difficult to move up. And living in the constraints of the culture becomes learned behavior.

It’s not the traditional social problem counties are used to tackling. The closest thing to a Children’s Well-Being Department is a school system, but school districts are often independent of counties and many times their boundaries don’t overlap, and by the time they reach kindergarten most children are 5 years old.

Many counties participate in the federal Head Start program, which provides parent involvement services, health care, nutrition and early childhood education to families below the federal poverty line. Others have tailored their own programs. Mecklenburg County, N.C. charted a task force to figure out the best way to boost the chances for success for children in poverty when a report showed their children in poverty to be at a disadvantage to those in other urban counties.

Weber County, Utah is matching its children with intergenerational poverty navigators to help them work with mentors to get the most out of services in many departments and move them out of the cycle.

Five counties in Idaho do home visitation through their public health departments that starts before birth and lasts until children reach age 3. The department also provides parenting education and will perform nutritional training and assessments.

One way to attack poverty is through early-learning programs. The Minnesota Model for Early Education, which provides scholarships to low-income families for prenatal care, childcare and preschool education, is aimed at reducing and preventing the achievement gap.

“If we prevent the achievement gap, we have a good chance of eliminating or reducing intergenerational poverty,” said Art Rolnick, one of the architects of the program who previously served as a senior vice president and director of research at the Federal Reserve Bank of Minneapolis.

A 1996 Perry Preschool study examined cognitive and social outcomes and found a return to society that could be as high as $16 for every tax dollar spent. That prompted Minnesota business leaders to create the Minnesota Early Learning Foundation. The foundation raised $20 million to fund an early learning demonstration model, which included awarding scholarships to low-income families for prenatal care, childcare and preschool. From 2008 to 2011, 449 Ramsey County families were recruited to see if they could duplicate the Perry Preschool findings. Although it’s too soon to have hard data on the outcomes for the 2008-2011 program, Rolnick said results show there are “significant savings right away” because fewer students are being held back a grade or being enrolled in special education classes.

“Preliminary results are very suggestive that we will get the same results as the Perry Preschool study,” he said.

A quality rating system, dubbed Parent Aware, ranked the preschools in the area. Schools that scored three or four stars received scholarship money awarded to the area families. “When they [parents] get the scholarship, they can’t believe someone cared so much about their child,” Rolnick said. “This is not simply Head Start. We empower parents, not programs.” With the help of a paid parent mentor, they chose programs that worked best for the child and family. The scholarships cover five days a week, eight hours a day, year-round programs, which also helps parents go back to school and hold down jobs, he noted.

“Their income is going up and they feel better about themselves, it’s a holistic approach.” In December 2011, the federal government awarded Minnesota a “Race to the Top” grant of $45 million to expand the program. The state kicked in $50 million for scholarships as well.

“A better investment than Amazon headquarters”

“These kids are the future workforce,” Rolnick pointed out. “Scholarships also help the local economy, when preschools beef up to meet the demand. It’s current jobs as well as future jobs.”

Investing in early childhood programs is investing in your economy, Rolnick said. “I don’t care how much money you give to the automobile industry, if kids don’t graduate from high school, it’s going to be a third-world economy.”

If you’re a county that wants to create a similar program, and you don’t know where to start? “You need somebody on the ground, in the community,” Rolnick said.

“Start small, raise some money for the scholarships,” he said. “There’s usually an organization that has visiting nurses [for prenatal visits], for every scholarship you give out, let this organization know you need a mentor for the family. So, the idea is start small, create a non-profit, get some business leaders to raise money for scholarships. You get those people involved as leaders to say this is important to our community; that makes a big difference. That’s how we did it here.”

Scholarships should be based on what area quality preschools are charging for annual tuition. “You want to meet the market price,” he said, “so parents can choose what works for them based on the existing market.”

At one of the first meetings with business leaders, the CEO of Best Buy told Rolnick that the company often donated to philanthropic efforts but was never sure if it was helping.

“In this case, you’re going to know,” Rolnick said. “We’re going to track each child on school readiness, cognitive and social skills; when we get these kids school ready, this is an outcome we can show you. In Minnesota, roughly 70 percent of kids, on average, start school ready; ‘poverty children’ start at 30 percent; in our most at-risk area in north Minneapolis it’s 18 percent.”

Children who participate in the program are testing at 50 percent to 100 percent readiness. “In our most at-risk area, in north Minneapolis, where they’ve only been through one year or one-and-a-half years in the program, we’re going from 18 percent to 55 percent,” Rolnick said. “We will track them through high school. We are tracking them to show that indeed this works.”