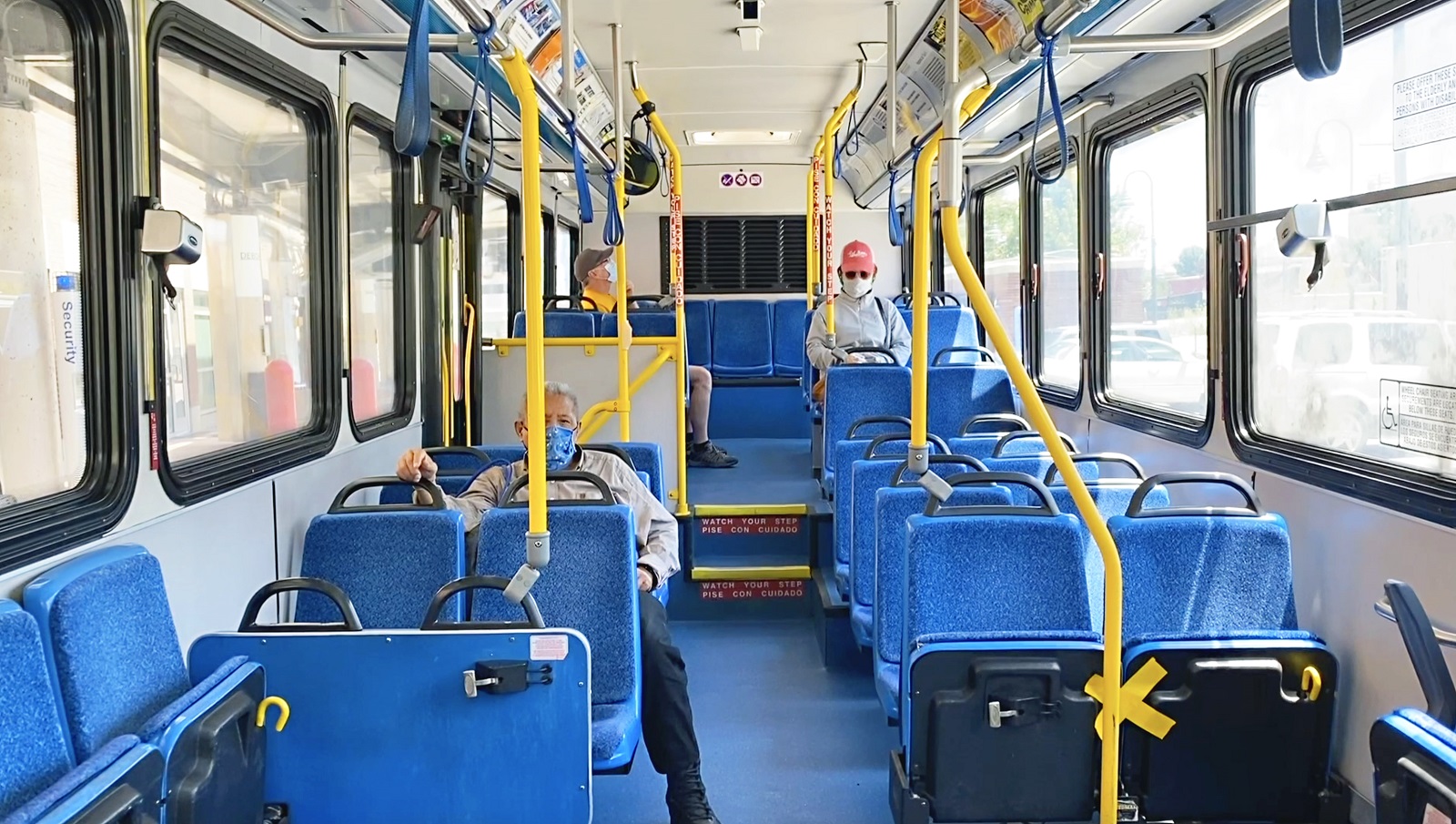 In order to filter by the "in queue" property, you need to add the Entityqueue: Queue relationship.
“The bread and butter of public transit is putting a bunch of strangers into a confined space, which is exactly the opposite of what you’re supposed to do during a pandemic.” The Port Authority of Allegheny County sums up mass transit's COVID-19 challenge

Schedules are everything in public transportation, and for St. Clair County, Ill., the pandemic’s timing wasn’t great, but it could have been worse.

Studying the shifts in the population and employment centers over two decades, a consultant found that the St. Clair County Transit District could attract new riders with a service expansion to better meet the needs of residents across the Mississippi River from St. Louis.

“We were trying to get it going for March, so the timing ended up being a blessing in a way,” said Ken Sharkey, a county Board member and managing director of the agency. “We had hoped that expansion would help us gain ridership with more robust service, but demand is anything but robust right now. So, we were able to save $4 million on the expansion.” But questions will remain as to exactly how accurate that once state-of-the-art $400,000 study will be in a post-pandemic world.

County transit systems across the country have watched their ridership plummet in the face of the COVID-19 pandemic, with the National Transportation Database showing the biggest dip in April 2020 — an 81.3 percent drop in ridership from April 2019. While ridership has rebounded, the national average has seen a 50 percent drop from a year prior. And there’s no question why.

“The bread and butter of public transit is putting a bunch of strangers into a confined space, which is exactly the opposite of what you’re supposed to do during a pandemic,” said Adam Brandolph, spokesman for the Port Authority of Allegheny County in Pennsylvania.

But while many of those missing riders were able to work from home, there are those who depend on public transit to reach work, grocery stores and doctors’ offices during the pandemic.

Those systems have been adjusting their service to keep their counties moving, serving as a lifeline until life returns to normal.

“We kept all of our vehicles running, albeit on a reduced schedule, for the whole pandemic,” Brandolph said, noting a 90 percent drop in ridership in late March. “That’s a testament to the importance of public transit.”

Washoe County, Nevada’s geography, like Allegheny County’s rivers and hills, makes it difficult to provide a substitute for transit service.

“Transit has always been a challenge because we don’t have a dense downtown core and most people drive to their jobs,” said Bob Lucey, chairman of the Washoe County Commission and chairman of NACo’s Transit and Rail Subcommittee.

“Because we’re a dry urban mountain region, we have these pockets of development. We can’t do a grid system,” that would allow for service by several routes.

“We have a very prominent working class that relies heavily on our buses and we have some food deserts, so they rely on us to reach those basic services,” said Lucey, who is the immediate past chairman of the Regional Transportation Commission of Washoe County and is the president-elect of the Nevada Association of Counties.

“We were definitely not going to cancel or put on hold any of our routes,” he noted.

“If we stopped providing the service, it would be very difficult to reinvigorate it. We will scale it back, do everything we can do to keep people safe, but don’t let it die.”

Rider safety has topped agencies’ agendas, with most suspending fare collection to minimize interactions between riders and drivers, who were often protected by a transparent barrier, while riders often entered the bus from the rear. In addition, buses are deep cleaned daily, ventilated and seats are marked “off limits” to promote physical distancing.

Those were not without costs, both real and opportunity. Sharkey said the operational changes necessary to ensure every bus could be cleaned add up to an extra $75,000 per month.

Kendall Tiffany, spokeswoman for Frederick County, Md. Transit, said that through the end of 2020, forgoing fare collection has meant a loss of $600,000. That revenue for the system has been coupled with a 20 percent loss in state transportation grants as a result of sales tax revenue losses during the recession.

Federal stimulus funding has been crucial to filling budget holes, to the tune of $39 billion ($25 billion from the CARES Act, $14 billion from the December stimulus) before the American Rescue Plan’s proposed additional $20 billion, but systems have had to set different priorities to make that funding last. The Atlanta-Region Transit Link Authority, which serves 12 counties, has halted underperforming routes and reallocated those buses to the more heavily used routes to allow for more physical distancing.

“It’s not the perfect solution because there were some people on those [discontinued] routes who needed service, but there was really no way to do it,” said Cain Williamson, the Atlanta agency’s chief planning officer.

“Even with running routes that are relatively productive, they still aren’t producing the same level of ridership that they were producing pre-pandemic, and so at some point that has longer-term financial and structural consequences that people are starting to grapple with now. How do we remain solvent until,” life returns to normal?

The pandemic has been devastating for long-term planning efforts. Allegheny County saw system-wide ridership increases in 2018 and 2019 before the pandemic. The agency will still assemble its scheduled 25-year plan, but it will be informed largely by in-depth input from public meetings instead of ridership numbers.

“We want to serve as many people as possible, and that comes down to numbers, but at the same time, some decisions make sense whether you have the numbers to back it up or not,” Brandolph said. “When you look at these numbers from 2018 and 2019, it seems like a long time ago, but they’re the last two years we’ve had normal ridership. It’s so hard to estimate what it will be like two years from now.

“The vaccine is the light at the end of the tunnel, but we don’t yet know what’s in store for employees and employers, even when the majority of the population is vaccinated.”

Likewise, Washoe County is planning to go ahead with assembling a five-year plan. The county’s residential and commercial growth has not slowed with the pandemic, which may leave the county with greater transit service needs when all is said and done.

St. Clair County is still planning on that expansion, someday.

“The plan still makes sense, it’s just a matter of when you pull the trigger and implement it, depending on what’s going on,” Sharkey said. “What I’m expecting are some shifts in people’s education plans and we expect there will be some permanent [worker] displacement.”

The Atlanta counties’ system is communicating with large employers and business improvement districts to anticipate changes in employee traffic.

“I think employers have seen productivity in white-color jobs not suffer too much for not being in the same place,” Williamson said.  “But I think there are internal corporate cultural consequences for folks not being together on some sort of regular basis. My guess is employers are going to wind up having to balance those against one another and the demand for commuter transit will return, perhaps on a few-days-a-week basis.

“I think there will be some sort of return to normalcy in the office, but I don’t think employers know exactly how much or when, either.”

Brandolph said that in lieu of heavy commuter service to downtown Pittsburgh, his agency is adjusting service to operate in evenings and on weekends to further meet the needs of essential workers.

“On most of our routes, prior to November, we didn’t run a lot of late night or weekend service; we’re starting to transition more to do that, to cater to those who are continuing to ride public transit,” he said. “It’s not necessarily a bad thing that we’re forced to make changes based on those who are riding and who rely on our service.”

Throughout the pandemic, Lucey has seen the Regional Transportation Commission as a canary in a coal mine, indicating how safe people feel the community is.

“If people see empty buses, if they don’t see people riding the buses, they won’t feel like it’s safe yet,” he said. “We had to make sure we were allowing for buyer confidence. If you see your bus driver being safe, if they’re smiling with their eyes, they are comfortable, but it’s a result of a lot of agencies working together to make that happen.”

Safety means turning away some customers who could crowd out the foundational transit riders. When the pandemic restrictions in California took their toll on residents, many fled to Northern Nevada, prompting the Regional Transportation Commission to cancel promotions like free rides on the Fourth of July, which would otherwise encourage new riders.

“We were worried that people were going to come to our community to ride our transit. We canceled the ‘free rides’ so we could maintain safe distancing and make sure our drivers could get work and our essential workers could get to their jobs without overloading the buses with people,” said Mark Maloney, RTC’s director of public transportation. “It makes it a little difficult, but we were strict and had to adhere to our safety campaign.”

“It was good for the residents, and the drivers love the overtime, but I’m not sure it would be prudent to pack a 43-seat bus with mainly older people right now,” Sharkey said. “That service may take another year off.”

The most important trait these agencies can identify during the pandemic is flexibility, seasoned with the willingness to meet the needs of the riders who need them.