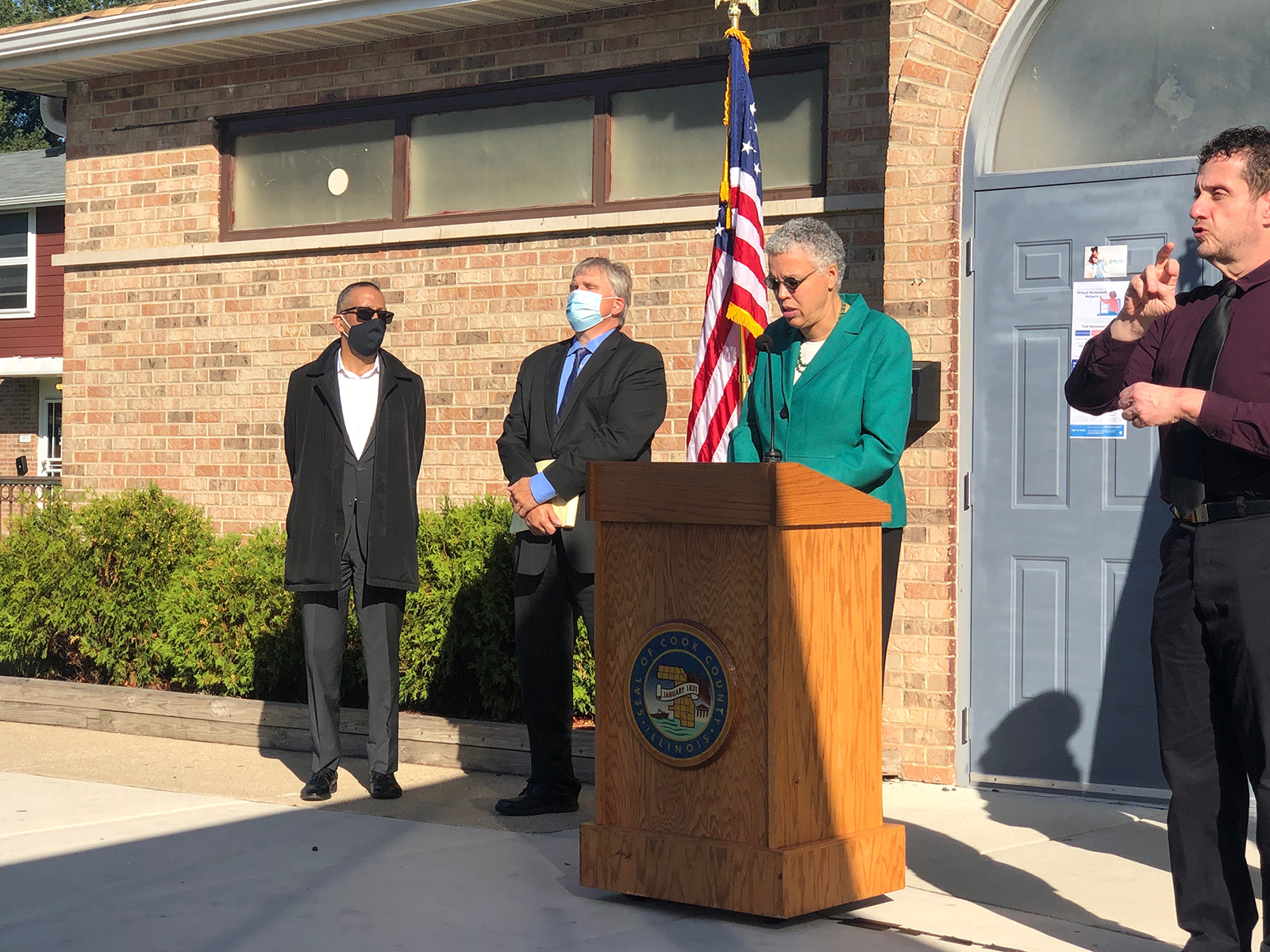 Pamela Carter was excited to have recently been named to the FCC’s Intergovernmental Advisory Committee, where she is one of three county government representatives.

Except her own internet service at home is so poor, she has to drive to the Augusta County, Va. office building, where she is a county supervisor, to log into hours-long video meetings. And she knows that in Virginia’s second-largest county by area, she is far from the only person with problems like that.

“I get emails from residents every day complaining about the lack of broadband,” she said. “I hate telling them ‘we’re working on it,’ because it sounds like we’re not doing anything, but it’s expensive and we don’t have a lot of options right now.”

Augusta County’s broadband service has been a growing concern for years, with half of its residents reporting on a survey that they don’t have adequate service, but it picked up widespread attention, as it has in counties across the country, this spring when the COVID-19 pandemic sent workers and students alike home and online, digitally elbowing each other for bandwidth and bringing the digital divide into sharp relief.

Though many counties are deploying internet hotspots for residents to come and use to bridge gaps in service, many are funded by CARES Act money that will expire after Dec. 30. The cost of building out the fiber to extend broadband service often leaves large rural counties like Augusta reliant on state and federal grants, including from the Virginia Telecommunication Initiative.

The Federal Communications Commission defines minimum download speed as 25 Mbps for student and telecommuting needs. The unreliability in the FCC’s own broadband coverage maps, however, prompted NACo to develop its TestIT app to provide real data on connectivity.

When the majority of schools shut down in March, it was not as easy for many students as simply turning on a computer and joining a virtual classroom with a click of the mouse.

An analysis of census data revealed 3 million students lack home internet and an estimated 17 percent of students do not have access to computers, according to a report last year by the Associated Press.

In Cook County, Ill. the pandemic emphasized the county’s own broadband challenges.

The first initiative involved a partnership with the Housing Authority of Cook County (HACC) and Comcast through the Internet Essentials Partnership Program which provided no-cost broadband internet to housing authority households with school-age children.

The program is being offered to nearly 14,000 children residing in over 6,500 households throughout Cook County.

More than 1,100 HACC residents with children took advantage of the program. HACC covered the cost for the next 10 months, through the 2020 to 2021 school year.

After the partnership between HACC and Comcast helped fill the need for broadband access, it became apparent that many families also needed the equipment to access the internet.

This led to the county’s second initiative to provide laptops for all school-age HACC students who needed e-learning devices. HACC pre-ordered 900 laptops for around $300 per laptop.

“We provided the young people in the Housing Authority with free laptops that are theirs, period,” Preckwinkle said. “They are not loans. They’re theirs so that they can continue to do their work remotely as their school district requires.”

Many families who signed up for the Internet Essentials partnership indicated that local school districts were not issuing laptops or had run out of devices, leaving children sharing a device within their family.

Preckwinkle added that some school districts provided laptops as long as there was e-learning, but as soon as some schools resumed in-person classes, students had to return the devices.

The laptop initiative helped fill these gaps allowing children to fully participate in any virtual learning and have the time to complete assignments.

Both the laptop program and Internet Essentials partnership are funded by CARES Act dollars.

While the county has been making efforts in the past to provide broadband access by investing in fiber optic cable to connect more residents, Preckwinkle said the pandemic emphasized the digital access inequity.

“We live in a country where there’s tremendous inequity and a lot of it is race based and the extent to which we can help level the playing field by providing people first with access to internet and second with the tools they need to access the internet, that’s all to the good,” she said.

Back in Augusta County, Va., Carter teaches at Mary Baldwin College, and she has been recording lectures, not just so her nursing students can watch them at their convenience, but to ensure the kind of quality that she can’t vouch for on her side or her students. In addition to being a large county, geographically, its topography, particularly in the western underserved region, is full of high, narrow mountain ridges making both cell service and internet services unreliable.

“That’s the opposite of telehealth,” she said. “When you’re doing a telehealth visit, you want to be able to connect visually with your doctor, but in most parts of our county, the video freezes or you can’t get good eye contact with the doctor and it defeats the whole purpose of video contact.”

As concerns about crowding inside buildings during the pandemic has driven strict rules about occupancy, a desire to limit the number of vulnerable people in waiting rooms has driven much of the health care field to remote visits.

“I haven’t had a telehealth visit from home that went smoothly,” Carter said. “My experience is shared among a lot of our residents, and many of them would really benefit from an advance like this because they’d have to travel really far to see a doctor otherwise.

“It puts people living here at a disadvantage.”

Counties that have the internet capacity to successfully use telehealth have seen boosts in their efficiency, particularly with regard to mental health support during the pandemic.

Sevet Johnson, behavioral health director for Ventura County, Calif., said that not having to drive among clients has freed up time among her county’s clinicians and reduced the risk of traffic accidents en route to appointments.

Carter has been frustrated by the apparent ineligibility of using CARES Act money to build out broadband capacity, even if it’s done in the name of expanding access to telehealth, but she and the rest of the county’s broadband committee will continue pursuing grants to entice internet service providers to build out fiber and fielding more complaints from residents.

Carter hopes, however, that her work on the FCC advisory committee will offer educational opportunities to help her strategize a way forward for Augusta County.

“I’m hoping this will open doors to knowledge I don’t have now,” she said. “We’ll have to get creative with how we do this, but I have hope.”

The National Telecommunications and Information Administration at the Department of Commerce has created a searchable database of 50 federal broadband grants, loans and other resources.

The federal programs provide funding for state and local governments, schools, libraries, small businesses and other community groups interested in expanding broadband access. Applicants can search for programs by agency, program purpose and eligible recipients. The inventory includes well-known infrastructure efforts at the Department of Agriculture and the Federal Communications Commission.

Other programs in the NTIA inventory that recently made broadband grants include The Appalachian Regional Commission.

A $40,000 grant was awarded to the SEDA-Council of Governments, a public development organization serving 11 central Pennsylvania counties, for a feasibility study of broadband access in Northumberland, Union, Lycoming, and Clinton counties.

As the federal government works to fill the gaps in connectivity that persist despite significant investments, NTIA is developing a new mapping platform that paints a more precise picture of the current infrastructure and services that are available around the country. This will help policymakers make better decisions about how broadband funds should be allocated.

NACo will hold a CIO Forum titled “Innovation: Fast Forward – Broadband” Nov. 18 from 12 noon to 3 p.m. It is part of the NACo Tech Xchange CIO Forum Series. Presentations will be made by:

NACo will share an update on broadband initiatives and priorities. To register, visit: naco.org/naco-tech-xchange-cio-forum-series-broadband.