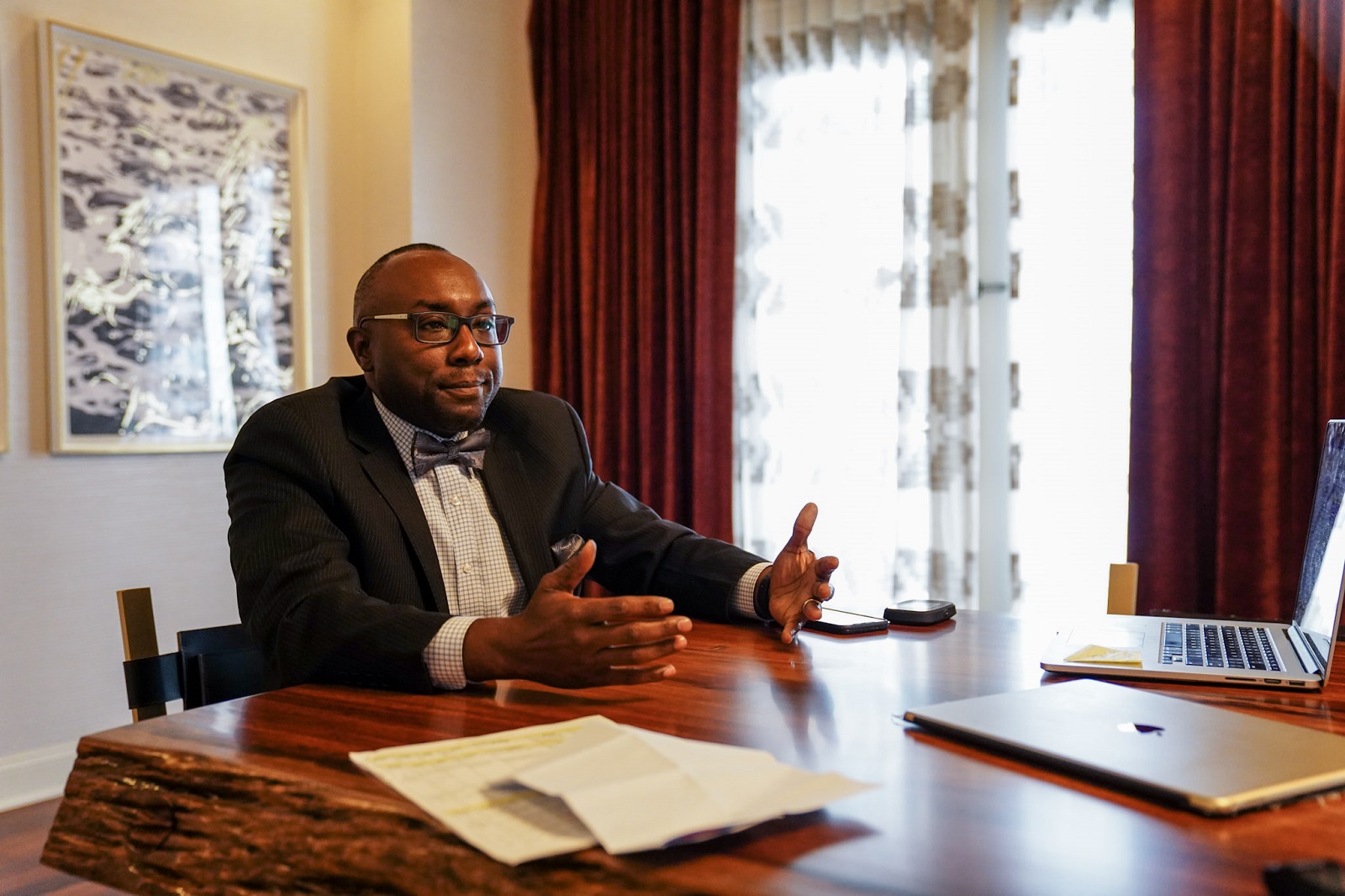 In order to filter by the "in queue" property, you need to add the Entityqueue: Queue relationship.
NACo President Larry Johnson's early successes building a safe community in DeKalb County, Ga. led him to elected office. “Counties need to make sure our residents have what they need, so they can make this the best day of their life.”

Ask Larry Johnson how he’s doing, and chances are you’ll get the same reply every time.

That was as true years ago as it was when he was sworn in July 12 as NACo’s president. The DeKalb County, Ga. commissioner is bringing a background in public health and public service to lead the association, but also a backbone built of optimism.

“Every day is an opportunity,” he said. “An opportunity to help somebody, make somebody smile, help your family, be the best father, the best husband and you have to take that attitude on, otherwise with all the doom and gloom going on around us, it’s easy to get depressed.

“You have to choose to make this the best day of your life, and that’s what I do.”

He assumed the NACo presidency at a pivotal time in the nation’s history, at a largely in-person Annual Conference in Prince George’s County, Md. The conference was possible because of a tremendous COVID-19 vaccination program that counties played a large part in administering after more than a year of serving as a lifeline for millions of Americans during the pandemic.

The only son of teenage parents, Johnson grew up in Cook County, Ill., where he spent a summer running a Little League baseball team that he endeavored to make more than just a sport.

“I wanted to deter them from crime and gangs,” he said. “We played baseball all day, but I’d send them off with homework — writing a few paragraphs about sportsmanship and citizenship.”

Decades later, he keeps in touch with some of the young men he once coached, and takes pride in their growth, both personal and professional.

After earning a Master of Public Health (MPH) degree, he moved to DeKalb County, working in health education and pedestrian safety.

“A lot of people didn’t know what an MPH was, they joked that it stood for ‘miles per hour,’” Johnson said.

That wasn’t too far off, because Johnson soon found himself working on pedestrian safety issues, focusing on a part of the county that saw a high rate of deaths among African Americans attributable to poor pedestrian infrastructure.

“We had no sidewalks, no crosswalks, kids had to walk to school on dangerous streets and buses would stop in the middle of blocks and make it hard for people to reach them,” he said. “Transportation systems were an afterthought in these neighborhoods.”

In solving these problems, Johnson started to see an opening to make changes. While working with the state government and local community groups, he realized that despite living about 15 minutes from the state capitol in Atlanta, many of his neighbors had never been there. He was successful in having the third week of October designated “Pedestrian Safety Week,” a significant time given the safety challenges endemic to earlier sunsets and reduced visibility in mid-autumn. The next year, he pushed for a law giving pedestrians the right of way in crosswalks.

“I became an advocate for the community in the political process,” he said. “I wasn’t thinking about going into politics, I just wanted results.”

Seeing those legislative successes early in his career, before he might become jaded by legislative inaction, helped him to keep looking up.

“I started seeing how to get residents involved and engaged in the process,” he said. “They can make change in their governments, take steps to move in a positive direction and save their life.”

He spent a few years working on local community-building efforts with President Jimmy Carter, gaining an influential mentor in First Lady Rosalynn Carter, then ran for the DeKalb County Commission in 2000. Though he lost, he set his ego aside and worked as a commission aide for the victorious Hank Johnson. When redistricting opened up a congressional seat Hank Johnson was going to pursue, it offered another County Commission opportunity for Larry Johnson, one he was reluctant to take.

One of the prevailing voices was one of his old Little League players, along with Johnson’s wife, Tanisha.

“I used to encourage them to be all they could be, and it came full circle,” he said.

His background as a commission aide helped him become effective quickly upon taking office in 2005, when his involvement with NACo began.

“We were able to bring in some sidewalks, make school zones safer, build better bus shelters,” Johnson said. “I had the training ground for what it took to get things done. Having a chance to make a difference for people has allowed me to be who I am today.”

As the country emerges from the COVID-19 pandemic, Johnson sees a bright spot in public health getting recognized.

“People are gaining a greater appreciation for how messaging is done, working from the bottom up to connect with people to get them to adopt behavioral changes,” he said. “Now people understand how important prevention is.”

“Now it’s in vogue, it’s great to see people going into it and put resources into public health,” he said. “It’s a very noble cause. It’s a field that allows me to do a lot, it allows you to evolve into many public policy spheres that just one field might now allow you to go into.”

He also wants to orient counties toward growing and prospering, coming out of survival mode from COVID to THRIVE — the theme of his NACo presidency:

“Counties have excelled in COVID, doing what we always do,” he said. “Let’s not stop there.”

Part of that involves calling on counties to do more. If they aren’t NACo members, Johnson wants them to understand that membership has its privileges, including being a party to the strengthening federal-state-local partnership. If they are members, Johnson said their ideas and participation are what NACo needs to get stronger.

“Don’t just be a spectator, get on the field,” he said. “Take the next step,” and join a steering committee.

“Those are the folks I look at in terms of tenancy, determination and resiliency,” he said.

All qualities county officials have shown during the pandemic, and what will be necessary to take the next steps forward every day.

“Counties need to make sure our residents have what they need,” he said, “so they can make this the best day of their life.”